I have many good friends in the 1985 batch but I have not met Murmu. Unlike most IAS officers, I notice Murmu has NEVER had a central deputation. This raises questions – which I’ll not touch upon for now.

(In the Gujarat cadre my batchmates are Amarjit Singh (Secretary UPSC), Tapan Ray (MD of Gujarat State Petroleum Corporation), HV Patel (Commissioner of Commercial Tax) and A K S Sutaria (Revenue Inspection Commissioner). I also know Joy Cheenath (1979) particularly well, since Joy and I were together at USC for our PhDs. Joy is MD of the National Agriculture Produce Marketing Company of India Ltd.) 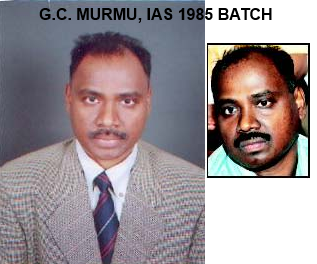 It seems that Murmu developed strong links with Modi over time and has occupied two key roles in Modi’s government since 1 October 2004. He is both Secretary to Modi and the Secretary of the Home department. It is through Murmu that Modi operates.

MURMU (ON BEHALF OF MODI) HAS BEEN CAUGHT TWICE ON TAPE SABOTAGING THE JUSTICE SYSTEM:

1) The first tape relates to his THREATS and bullying of Sreekumar that I’ve discussed here.

2) The second tape relates to his attempt to sabotage the justice system in the case of the Ishrat Jahan fake encounter case.

“The CBI team probing the Ishrat Jahan fake encounter case on Saturday questioned G C Murmu, the Principal Secretary to Chief Minister, and Ahmedabad Crime Branch Joint Commissioner of Police A K Sharma in connection with the voice recordings submitted by suspended SP Girish Singhal. The voice recordings, now part of the chargesheet, contained alleged details of a meeting held at Advocate General Kamal Trivedi’s office where a group of officers reportedly discussed ways to sabotage investigation in the case.

Singhal, who was arrested in the case and is now out on bail, had submitted to the CBI two pen drives containing discussions reportedly held between government officials, lawyers, ministers and police officers that he had secretly recorded in November 2011. According to the alleged voice recordings, Murmu, Sharma, former minister of state (Home) Praful Patel and former Law minister Pradeepsinh Jadeja discussed the case with Trivedi.”

He is denying but CAN’T THE CBI DO A VOICE TEST????

So now we have TWO SMOKING GUNS just related to Murmu. And of course there are MANY MORE smoking guns everywhere.The trigger was pulled by the same man in each case: Modi. He is clearly the mastermind.

It is amazing that India’s smartest Investigators can’t piece the events together. Either they are incompetent or they are biased or they are under pressure. We know that during Vajpayees’s era that could have happened. But what about the last 10 years of Congress? Is there still pressure on SIT/CBI?

The bumbling idiots of SIT/CBI are still struggling to piece together evidence. Reminds me of the two detectives in Tintin.  Only, the bumbling in the Modi case is not funny. He should have by now been prosecuted for MANY cases. Being the Godfather, all roads lead to him. (Pictured above: SIT and CBI)

Murmu has also been involved in bribing Harish Salve. More details here or here. [Screenshot on my server]

« “The Truth About Modi” – publishing herewith an initial version, with request for comments
The SIT has shown criminal inclinations by rejecting a GENUINE audio tape in which Sreekumar is being bullied by Modi’s stooges »
View more posts from this author