The scientific process is clear enough since Francis Bacon's Novum Organum, as refined by Karl Popper.

Science is a tentative body of knowledge subject to repeated questioning, proof and refinement. We do science by asking questions.

Science is independent of any "scientist".

The day we start believing, we become subhuman.

Doesn't matter if we believe in a book of science, in the government, the Bible, Quran or the Ramayana.

All belief is a roadblock to the advancement of our species.

If all education does is to teach someone to read, then we are talking merely about literacy. Comprehending something doesn't mean understanding it.

Unless a person is able to critically analyse even the claims of Nobel prize winners (let alone governments) he is not educated. 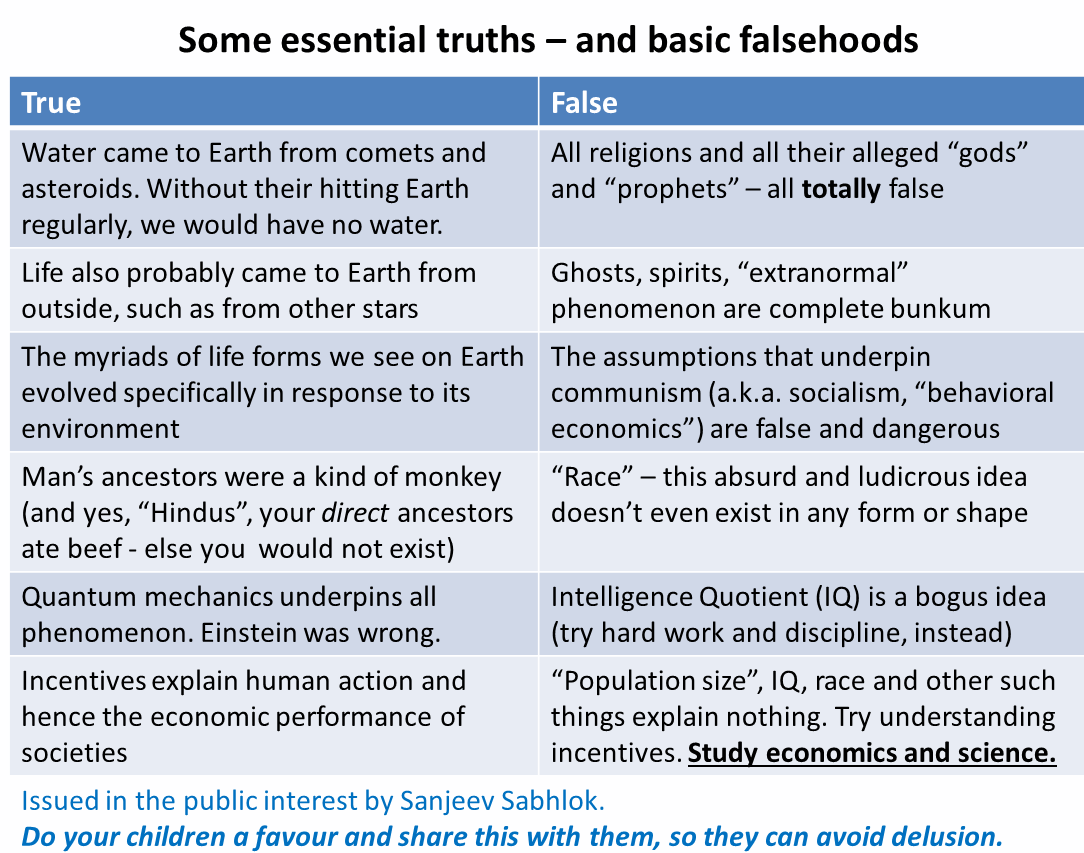 Why Most Published Research Findings Are False

“Science is the belief in the ignorance of experts”.

By Richard Feynman, in: “What is Science?”, presented at the fifteenth annual meeting of the National Science Teachers Association, in New York City (1966) published in The Physics Teacher Vol. 7, issue 6 (1969)
====

I write a lot about critical thinking. The most comprehensive discussion is in two chapters in The Discovery of Freedom (draft manuscript here). Here are a few blog posts that illustrate this concept.

Most people spend a huge amount of their life defending errors of analysis or judgement that cost them dearly. That is because it taxes the brain to review one’s ideas. That mental cost is too high for most people to invest.Most people spen]

a huge amount of their life defending errors of analysis or judgement that cost them dearly. That is because it taxes the brain to review one’s ideas. That mental cost is too high for most people to invest.

A blog post I recently published on alternative medicine – with other links.

Trust no one – but yourself

I’m am amateur and I delight in it

The incomeptence vs. competence debate

EVERYTHING that ANY human being has EVER thought about or proposed can be tested by ANY other human being who puts his/her mind to it.

While you struggle with these silly ideas about “competence” I focus on asking questions and finding answers. While I may go wrong this way once in a bluemoon, you will go wrong 1000s of times since there is NO “competent” person in this universe and you are forced to trust someone’s claims of “competence”.

Clearly you are unable to ask questions – a condition attributable to the socialist system of rote learning you’ve gone through. Fortunately I not only did the rote (pretty well) but from a very early age read enormous quantities of philosophy and learnt to think for myself.

I haven’t found many people like me in India and VERY few even in the West – who think through everything of significance themselves. But without that capacity you are a mere robot (which you actually claim you are, so good on you). I’m actually a human, which means – I think therefore I am. Not because someone says so.

My note on FB:

There is no medicine: there are only chemical reactions

There is no physics: there are only forces

There is no economics: there are only incentives and actions

There is no biology: there are only combinations of DNA molecules

A good education is a process to confirm to the student his comprehensive ignorance. Not only his ignorance but the ignorance of all those who have lived before us.

At the end of the formal education the student should then be ready to ask questions and, thus, for lifelong learning.

Addendum
http://www.3quarksdaily.com/3quarksdaily/2011/07/the-dignity-of-skepticism.html
http://reason.com/archives/2011/08/02/a-trick-of-the-mind
http://www.philosophypress.co.uk/?p=1951 (David Hume’s impact on causation – Hume is very close to Charvaka, believing that “we cannot go beyond experience when it comes to investigating the nature of reality”)
https://stemplet74.substack.com/p/the-problem-with-science-is-scientists
The Role of the Individual in Science and Religion (a good distinction between the importance of knowledge vs. importance of a ‘founder’)
Innovation
Think different (about Clay Christensen’s book, The Innovator’s Dilemma). Mr Christensen and his colleagues list five habits of mind that characterise disruptive innovators:

People often take umbrage to opinion that contradicts their beliefs. They would rather shut down debate on such issues.
This defensiveness doesn’t occur on matters where they have applied their mind (e.g. they can happily debate why they prefer a particular mobile phone or car). It happens only on matters in which they have not applied their mind.
In such matters they have formed their opinions based on the esteem in which they hold someone else’s views. That person could be a “Nobel laureate ‘economist'”, a Pope, a Mullah, a “guru”, any “famous” person.
Somehow, in such matters (in which they have chosen to defer to authority) they think that others should also not apply their mind. It flusters them that others want to ask questions.
But the fact is that “expert” opinion on most complex issues is highly suspect. The proponent of that opinion is obliged to prove EVERY single statement (and as we know in ALL religions, they have no answer – except that some ridiculous book says so). In the case of climate change, the proponent needs to answer all my questions. In the case of Modi, he needs to answer all my questions before I can absolve him of the murder of innocents. The proponent needs to provide satisfactory answers to ***all*** logical questions that one might ask.
Btw, that’s also my test for “God” if ever such a creature presents himself/herself before me.
NEVER tell me to accept something just because “because someone “important” (or “qualified”) has said so”.
You do that at your own risk.
The moment you utter such a thing, I downgrade you to a lower species – a member of the screeching monkey family.