I'm providing below a further example of critical thinking.

A concerned friend wrote to me offering to consult doctors about my severe eye problems. My response:

My view now, is that this is almost certainly not a direct eye problem but a nerve compression inside the head. Three eye doctors I met have denied that possibility of nerve affliction without doing any tests. I don't think even tests will show such compression (which is what happened with RSI). [expensive tests including MRI were entirely useless]

My neck is probably very tight, causing compression. I will explore and find out the answer myself. If I do need tests done, I'll get them done here, but my experience says I should not waste further time (and money – at least $3000 wasted by now, with $600 worth of 'medicines sitting inside my fridge) on doctors.

I have spent about 4 hours since last night exploring the nerve compression hypothesis once again (I had thought  about it and rejected it earlier after two sessions of careful examination of my neck by my myotheraist, but that happens with many such hypotheses: one keeps trying and the puzzle doesn't add up, till one day it all comes together).

Among the many human anatomy books that I possess, I also have the Taschen Encyclopaedia Anatomica. This is a very useful book for it contains photographs of dissected dead people. Often it is not easy to understand anatomy from ordinary books. This book of photos of REAL people is exceptionally useful. (I won't post a scan of the cross section of the head that I've used to understand the specific problem at hand, for some people could become queasy after seeing such a picture.)

As a result of my analysis of the location of various nerves that serve the eyes, I've located the trochlear nerve as the possible candidate for examination. There are two problems I face in examining my trochlear nerve: (a) it is located deep inside the head and (b) the biokinetics of its possible compression are not obvious, nor described readily in any internet website.

The first time around I spent nearly 3 days on similar  research (plus two hundred dollars on getting my neck tested). At that point, since I had not spent sufficient time thinking about the biokinetics of the head, I decided that it was not feasible for the brain stem to become compressed through body posture.  Cervical nerves, yes, but cranial nerves, no.

I have now finally, after further careful study and analysis of the anatomy (including by feeling my neck muscles very carefully with my hand), determined that it is possible for the brain stem to be elongated and PULLED through bad posture.

How this happens is illustrated below (to the best of my knowledge, this is the first time anyone has understood the precise biokinetics of the brain stem, but I'd welcome any reference to any prior study of this issue).

By slouching forward, the head is forced to tilt backwards to keep the centre of gravity intact, leading to an unwanted ELONGATION of the spine.

Since the cervical spine can't be elongated (it is locked within the spine), the entire pressure generated goes directly to the brain stem. Since a number of optical nerves attach to the top of the brain stem, this DOWNWARD PULL on these nerves necessarily puts pressure on the eye nerves, leading to all kinds of painful and shocking sensations. 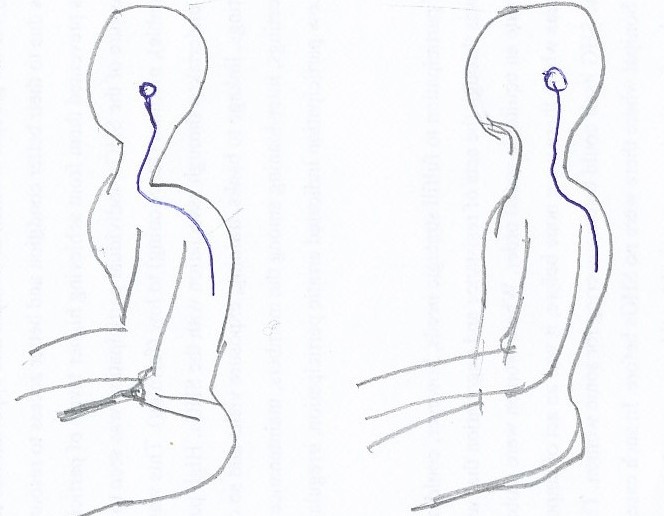 Figure: the person on the left is slouching forward at the computer, thereby significantly elongating the brain stem, and causing nerve "compression"/pain.

Since I thought of this underlying anatomical mechanism yesterday, I've already made significant advances in the solution. The remedy is to loosen the neck which has become tight through bad posture, and allow the brain stem to settle down to normalcy. This is best done through halasana type posture.

I've experienced immediate relief after an extensive session of rocking vigorously yesterday and today (rocking on one's back, by throwing the legs back as in halasana). This rocking puts pressure on the neck muscles which are forced to loosen up. The reduction in pain was almost immediate.

This causal analysis and solution is consistent with most (if not all) symptoms experienced so far.

The purpose of writing this is twofold: (a) to propose THE SOLUTION to serious eye pain arising from computer use and (b) to emphasise to any doctor friends who feel disturbed by my comments, that I'm a TOTAL DEVOTEE of the scientific method and will use it always to find answers – answers which MOST doctors in their myopic vision of the human body are either not willing or incapable of exploring.

Note that this hypothesis is consistent with my RSI problem – both being computer related (i.e. due to extremely HEAVY use of computers without the right posture or breaks for rest).

Only time will tell whether this analysis is correct (I hope it is: I've experienced significant relief today after a horrendous day yesterday when I was almost fighting to breathe and to walk). One thing is clear: that only by applying one's mind critically and carefully can solutions be found. There is no magic bullet in life.

This entry was posted in Science and tagged in eye problem.

5 thoughts on “Using critical thought and science to FIGHT pain”