The prospect of inflationary expectations as lockdowns continue

In recent days I’m coming to the view that governments are driven by a political imperative to value all lives equally, and will NOT change tack till their societies almost collapse – which can take 4-5 months at the least. In the meanwhile things can get worse on the debt front.

This is a post to keep track of this issue, particularly the views of others – for ultimately, the market can turn rapidly (as we saw with the crash in stock prices a month ago).

Poland’s inflation expectations up in March

Inflation expectations are a key measure in uncertain times

Preparing For Inflation: What Can We Do If The Misery Index Turns Up?

How to defuse the virus debt bomb

Could everyone be underestimating the future gold price?

inflation expectations crash and what it portends

END_OF_DOCUMENT_TOKEN_TO_BE_REPLACED

My next TOI blog post: Lockdowns won’t defeat the virus but will definitely destroy us all

END_OF_DOCUMENT_TOKEN_TO_BE_REPLACED

My next TOI blog post (in 5 parts): RSS’s standardised Hinduism

Time to call out Hindutva 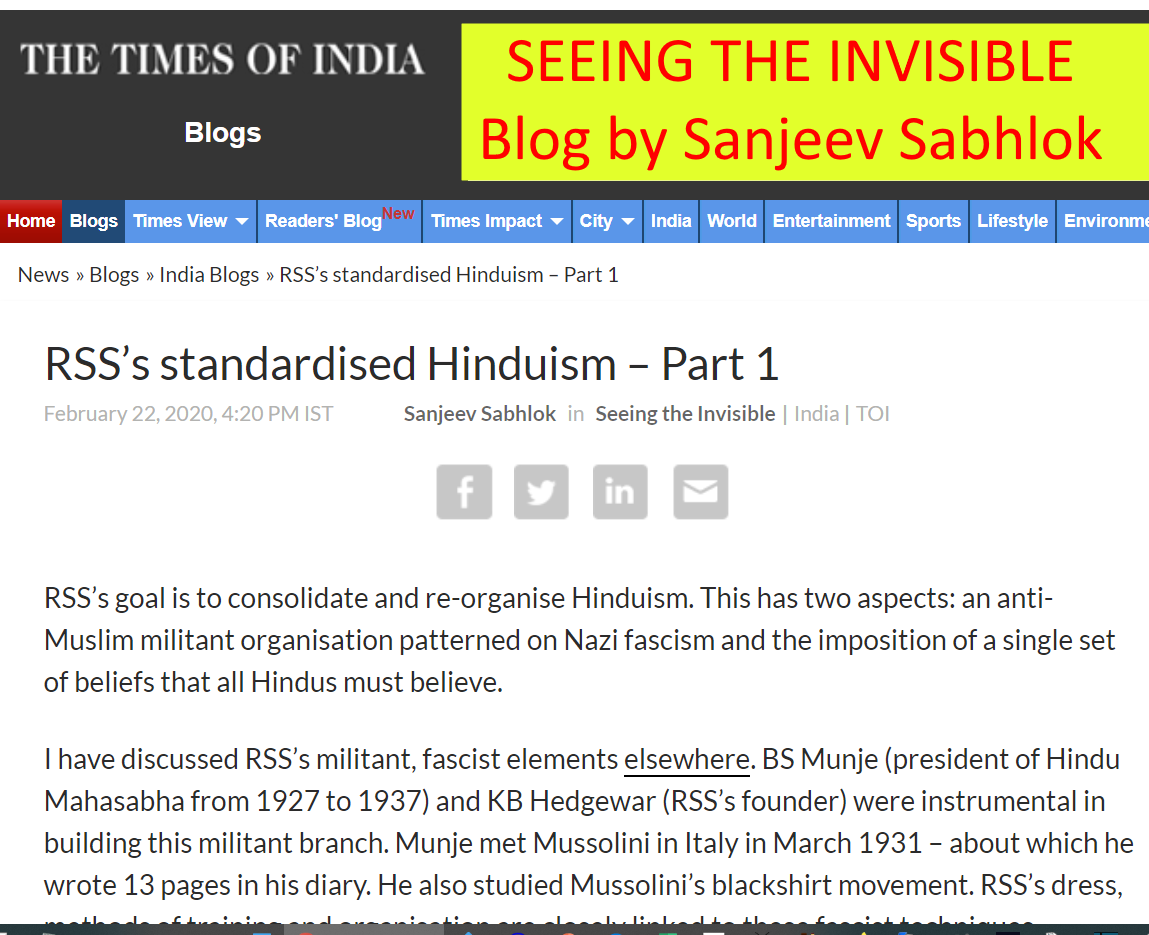 END_OF_DOCUMENT_TOKEN_TO_BE_REPLACED

Key points to note from Doniger’s The Hindus

Since I’m trying to build a strong repository of info to confirm whether Sanjay Sonawani’s hypothesis regarding Hindusim and Vedic religion being totally distinct religions, it is useful to extract relevant info from Doniger’s book, The Hindus.

“The Rig Veda consists of 1,028 poems, often called mantras (“incantations”), grouped into ten “circles” (“mandalas”). (It is generally agreed that the first and last books are later additions, subsequent bookends around books 2-9.) The verses were rearranged for chanting as the Sama Veda (“Knowledge of Songs”) and, with additional prose passages, for ritual use as the Yajur Veda (“Knowledge of Sacrifice”); together they are known as the three Vedas. A fourth, the Atharva Veda (“Knowledge of the Fire Priest”), devoted primarily to practical, worldly matters, and spells to deal with them, was composed later, sharing some poems with the latest parts of the Rig Veda.” [Doniger in The Hindus]

Even Rig Veda is complicated: it adopted many new Dravidian words

Many of the words that the Rig Veda uses for agricultural implements, such as the plow, as well as words for furrow and threshing floor and, significantly, rice, come from non-Sanskritic languages, suggesting that the Vedic people learned much of their agriculture from communities in place in India before they arrived. But the Indus people, who obviously did have plows and mortar, presumably would have had their own words for them. [Doniger in The Hindus]

Most of Hinduism is distinct from Vedas

“most of what Hindus have written about and talked about and done, from the Mahabharata on, has not come from the Veda.” [Doniger in The Hindus]

“It is hard work to fit the ruins of the IVC into the landscape of the Rig Veda. The Rig Veda does not know any of the places or artifacts or urban techniques of the Indus Valley. None of the things the Veda describes look like the things we see in the archaeology of the Indus. The Rig Veda never mentions inscribed seals or a Great Bath or trade with Mesopotamia, despite the fact that it glories in the stuff of everyday life. It never refers to sculptured representations of the human body. It has no words, not even borrowed ones, for scripts or writing, for records, scribes, or letters” [Doniger in The Hindus]

“But how could the Vedic people have forgotten about architecture, about bricks, about mortar (let alone about writing)? The answer is simple enough: They had never had them. In the good old days they had always slept on their saddlebags, and once they got to the Punjab they built in wood and straw, like the first two of the three little piggies, not in brick, like the third (and like the Indus people).” [Doniger in The Hindus]

“The authors of the Rig Veda did not know about bricks; their rituals required only small mud altars, not large brick altars.”Doniger in The Hindus]

No archaeological record of Vedic culture – no temples, no cities

“The Vedic people left no cities, no temples, scant physical remains of any kind; they had to borrow the word for “mortar.” They built nothing but the flat, square mud altars for the Vedic sacrifice and houses with wooden frames and walls of reed stuffed with straw and, later, mud. Bamboo ribs supported a thatched roof. None of this of course survived.” [Doniger in The Hindus]

The animals are distinct

“The evidence of animals suggests that the civilizations of the Indus Valley and the Vedas were entirely different, though this does not mean that they did not eventually interact. The Rig Veda mentions (here in alphabetical order) ants, antelope, boars, deer, foxes, gazelles, jackals, lions, monkeys, rabbits, rats, quail, and wolves, and other Vedas mention bears, beaver, elk, hares, lynxes, and otters. The Rig Veda also mentions lions (10.28.11), though the Vedic people had to invent a word for “lion” (and to borrow a word for “peacock”). (Lions may or may not be depicted in the Indus Valley; there’s a figurine that might be a lion or a tiger.)

“The Vedic people knew the elephant but regarded it as a curiosity; they had to make up a word for it and called it “the wild animal with a hand” (mrigahastin ). But they do not mention tigers or rhinoceroses, animals familiar from the Harappan seals. Nor are there any references to unicorns, mythical or real. The zoological argument from silence (“the lion that didn’t roar in the night”) is never conclusive (beware the false negative; the absence of evidence is not evidence of absence), but all this suggests that the Vedic people originally lived north of the land where the tiger and the elephant roam, and generally north of the Indus rhinoceroses, on the nonfalsifiable assumption that people who had seen an animal as weird as a rhinoceros would have mentioned it.” [Doniger in The Hindus]

The problem of the cow

“no figurines of cows have been found [in the Indus Valley – although bulls are plenty]”. Marshall even comments on this absence, the cow that does not moo in the night, as it were: “The cow, even if it was regarded as sacred, was for some reason, at present unexplained, not represented in plastic form or carved in stone.” [Doniger’s The Hindus]

The problem of the horse

“the IVC does not seem to know, or care about, the horse, who speaks loudly and clearly in the Vedas (as horses are said to do, beginning in the Vedic tale of the Ashvins—twin horse-headed gods)”. [Doniger’s The Hindus]

“the spread of the Central Asian horse (and, after around 2000 BCE, the chariot, for people rode astride for a long time before they began to drive horses) suggests that in general, when Indo-Aryan speakers arrived somewhere, horses trotted in at the same time, and the archaeological record supports the hypothesis that Indo-European speakers did in fact ride and/or drive, rather than walk, into India. For the horse is not indigenous to India. There is archaeological evidence of many horses in the northwest of the Indian subcontinent only in the second millennium BCE, after the decline of the IVC. ” [Doniger’s The Hindus]

“horses are not depicted at all in the extensive Indus art that celebrates so many other animals. The Indus people were crazy about animals, but not about horses. “The horse, the animal central to the Rig Veda, is absent from the Harappan seals”50 and “unimportant, ritually and symbolically, to the Indus civilization.” It is very hard to believe that the hippophiles who composed the Veda would exclude the horse from the stable of animals that they depicted on their seals.” [Doniger’s The Hindus]