Cass Sunstein is a delicate emotional flower that wilts with the slightest question. That’s why NUDGE IS A TERRIBLE IDEA.

Cass Sunstein is hungry for praise. I had not even tagged him but he found out that I had praised him and responded: https://archive.ph/6jGrm 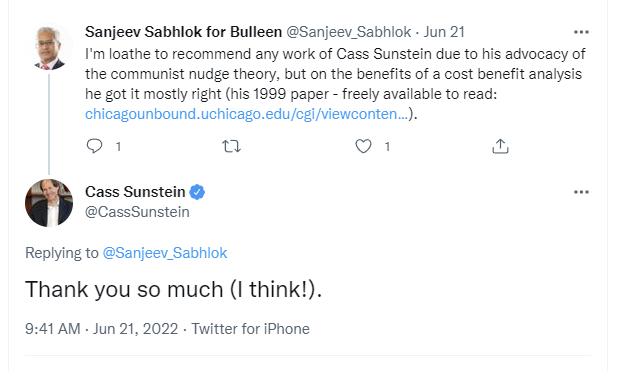 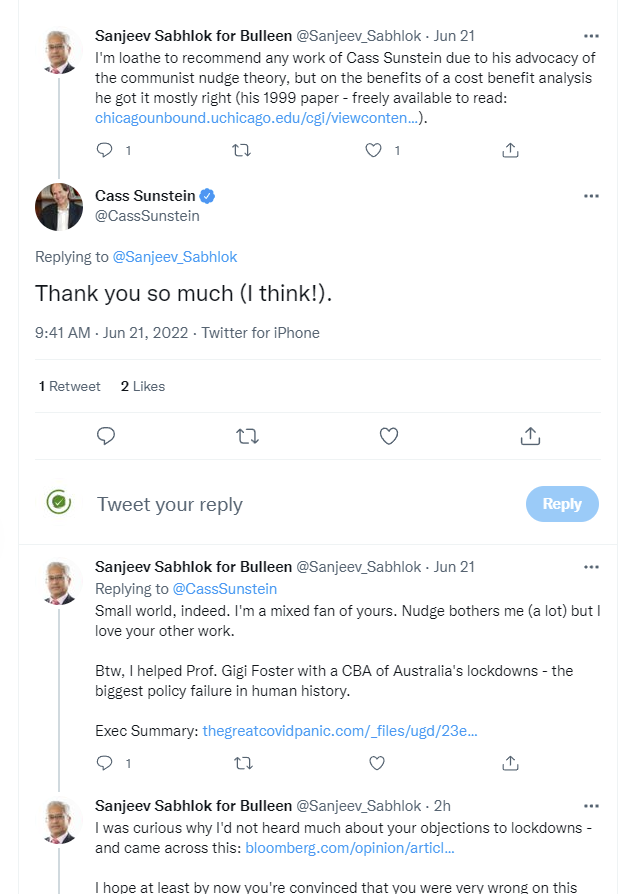 Then he BLOCKED ME!

I’ve made a note on this threadreaderapp: https://archive.ph/vsg2x

END_OF_DOCUMENT_TOKEN_TO_BE_REPLACED

A couple of weeks ago I started working on a paper with Jason Gavrilis.

My data analysis skills are now very rusty – I’ve not done regressions on large datasets for over 23 years since my doctoral dissertation. In WorkCover I did SAS programming for a year (I was hired for various things, including my ability to do SAS progamming) but programming skills and UNIX skills have a very short half life. Use them or lose them is the rule.

Plus I simply don’t know how to merge different datasets (eg. life expectancy, vaccine status, covid deaths) – never did such things before. Jason, on the other hand, is a whiz with data and with programming (he is using R). Let me therefore note that without Jason this paper would not exist, and I would have not been able to confirm my suspicions that lockdowns increase COVID deaths.

We’ve been fortunate that Martin Lally who’s done two papers that use the Stringency Index, has provided detailed comments on the test regressions that have run by Jason (for Europe). This means Jason is very confident now of the results we are getting.

I’m trying to complete a full draft very soon, and would welcome feedback on the draft:

I think the structure is now emerging – this will likely be a working paper, not sent to a peer-reviewed journal. But it has all the information to conclusively prove that:

END_OF_DOCUMENT_TOKEN_TO_BE_REPLACED

Reminded of this fabulous interview by Johan Giesecke with Sky News on 29 April 2020. He predicted with prefect foresight Australia’s MASS-SCALE COVID DEATHS OF 2022.

Interviewer: But you think that at the end of the day they’re all pretty much going to end up with the same fatalities, the same results, the same deaths regardless of what measures they took. Explain that.

Giesecke: Yep. .. [T]he other thing with a lockdown is – when you open it you will have more cases, so the countries who pride themselves in having few deaths now will get these deaths when they start lifting the lockdown.

END_OF_DOCUMENT_TOKEN_TO_BE_REPLACED

No, covid vaccines have NOT killed many people in Australia (or anywhere else in the world)

I’ve said this on many occasions, but here’s some stuff I sent out in an email communication with some excited and panicked people, a moment ago:

From the latest ABS all-cause mortality statistics, we have for Australia the following excess mortality by age cohorts:

In Australia, there were 1,366 excess deaths (relative to 2015-19 average) in 2020, when there was a lot of alarm and fear  to get people ready for the COVID injections.  In 2021, after mass injection, excess deaths increased by more than six-fold to 8,517.   What is worse is that the propaganda is to protect the vulnerable or elderly who had the first priority in getting the injections.  The result?   The numbers are raw data from the latest ABS release.  There was no pandemic in Australia in 2020, but the pandemic started by COVID injections in 2021.  The effect is persisting in 2022, with even greater death toll.  The average doses per Australian has already reached 2.23 doses.  The boosters (on top of two doses) have never been tested in clinical trials to be safe.  65% of Australians have already be third dosed.  Deaths continue to mount.

The claim is that this proves that vaccines are causing the excess deaths. Sadly, these people can’t read simple charts.

WHAT IS THE CHART SAYING?

We need precise ICDs of those who might die from vaccine. We have had a VAST increase in deaths from cancer/ diabetes/ dementia (all related to lockdowns) and a REDUCTION in deaths which could have been caused by vaccines. Age distribution is merely saying that those who died were from lockdowns. The vaccine affected would have been in 0-64. These groups have experienced VASTLY LOWER deaths in 2021. Nothing could be more conclusive than this. IN ADDITION TO MY OTHER ANALYSIS AT: https://t.me/sanjeevsabhlok/3762 and https://t.me/sanjeevsabhlok/3763.

Sorry but this is entirely and 100% wrong. There’s been a vast amount of UTTER NONSENSE produced by useless “researchers” who are panicked by vaccines. There is NO EVIDENCE in the excess deaths data of Sweden or Australia about any significant vaccine deaths. I’ve shown it again for Australia just a moment ago. I don’t care for projections and models, ONLY actual data. So should you.