Which cheek, nose and outer eye muscles are involved in severe eye strain?

Not just inner (behind eyeball) eye muscles have been involved in my eye strain problems which (HIGHLY PAID AND "QUALIFIED" QUACK) "specialist" doctors failed to diagnose and treat ("treating" me at great cost and unrelenting pain for completely NON-EXISTENT gland/bacterial problems), but as I noted a few weeks ago on this blog, upon further thinking about my experience, the outer face muscles near the eyes have also been involved.

I experience a creaking noise from these outer muscles (now that I know what is going on), which clearly confirms that these muscles are involved.

Some Chinese "traditional" practitioners (in their ignorance of human anatomy) mix up the natural tension accumulating points in muscles with what they call acupressure points. They are wrong. There is no "chi" nor any "acupressure" point. There are only what should be called trigger points. But that too, is a misnomer. The right term is chronically spasming muscles: spasming being is a defensive mechanism for muscles that have been "lifting" more than they are ordinarily capable of doing, without adequate counter-stretch/rest.

As a general rule muscle tension tends to accumulate near the tendons, i.e. points where the muscles meet the bone.

Over the past few weeks, I've been using heat therapy, Tiger balm (applying it even on my eyelids) and a lot of VERY HARD massage on key muscles where I experienced specific pain. This practice is similar in many ways to the myotherapy treatment of RSI that resolved many of my general RSI issues.

Not only have the results been very promising (I'm getting noticeably better each week), but now I'm probably the first Eye Strain Specialist in the world! (in addition to being the first  RSI Super-Specialist)

There was no chart anywhere in the world that described exactly where the outer muscles are likely to become sore through excessive computer work.

So I've made one (the arrows in red reflect my direct discovery and experience – and are my contribution to mankind).

There is no need for computer companies to put out "warning" signs against RSI and eye strain. They should put out a clear educational pack that I'm happy to design if someone contacts me. That should mark the END to any RSI/eyestrain in mankind's future. There is simply no reason why you should ever suffer RSI/eyestrain any more. I have the COMPLETE answers.


You can prevent eye strain by (a) undertaking eyeball rotation regularly [yoga] and by (b) pressing the same spots that Chinese call "acupressure" spots.

(But don't be fooled. These are not due to any great "spiritual" properties of yoga or any Chinese "chi". These are PURELY scientific, muscle-based, mechanical tools, since they are relaxing/ massaging key eye muscles.) 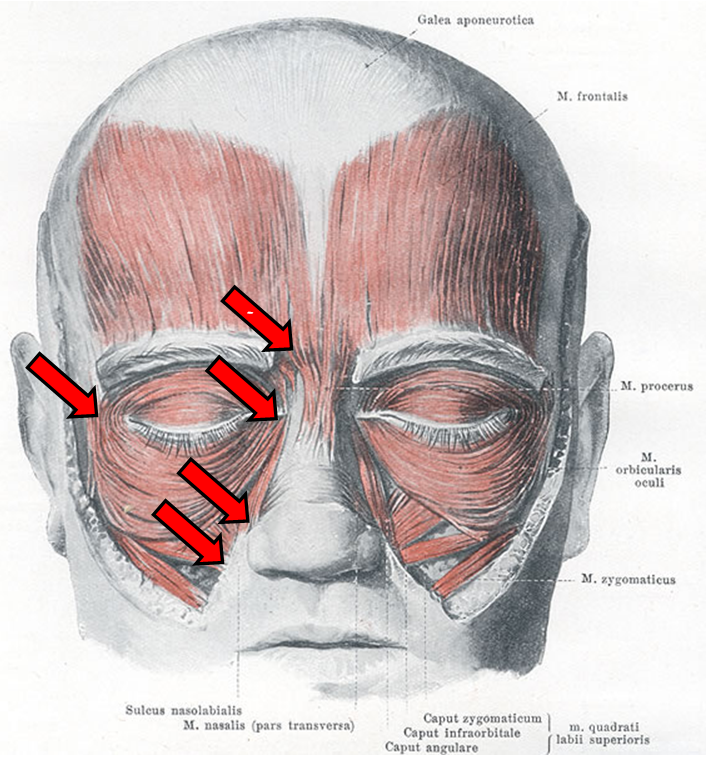 END_OF_DOCUMENT_TOKEN_TO_BE_REPLACED

How google has helped me confirm a new scientific breakthrough

My eyestrain recovery process that started a few months ago is underway. I'm still recovering. Much better but a lot of improvement yet to be achieved. I do about 1-2 hours of eye exercises each day (while walking/ in the gym/ in my bed when I wake up or before sleeping, in the bus, etc.). The range of exercises I have invented is quite vast, and maybe I'll document them later. It is one of the hardest things to stretch and exercise muscles behind the eyeball that are totally invisible and which the hand can't reach; but it can be done.

But one thing kept bothering me. Although my symptoms had felt exactly the same in both sides of the temple (deep, intense headache, pain, etc.), my left eye has taken far longer to recover.

I can't describe the sensations exactly (that will take half an hour of writing, and many paragraphs!), but basically the left eye has been more sore, more tight, more difficult to heal than the right eye.

Today I thought of a possible explanation. My hypothesis was that one eye must somehow be more involved in seeing things than the other eye. Just like one arm is more active than the other.

If this hypothesis was true, it would mean that my right eye was dominant and therefore the left eye's muscles were weaker, which made it work harder to see the computer screen. [Sorry, in an earlier version of this post, posted just a few minutes earlier, I accidentally inverted the logic! This one, now, is the correct logic.]

Interesting hypothesis, but I had never come across this concept of eye dominance before.

So how about googling this! I did so, and lo and behold! I've found tens of references to eye dominance. Please check them out yourself.

Eye dominance discussions on the internet are, however, primarily related to vision problems. Nothing to do with eye strain or eyeball muscles.

Well, that means I'm now the first in the world to have a hypothesis (PLUS at least one case study to confirm it) that eye dominance is related to the way eyeball muscles work at the back of the eyes, and that the non-dominant eye is more likely to be strained through computer use.

The main thing is that now I have an added eye exercise. I can now rest the left eye for longer than the right eye (by covering it while reading the computer screen, for instance – which is precisely what I'm doing as I type this, with the left eye covered by a paper). That should make the recovery process much faster.

I'm almost certain that this discovery is valid, and this solution equally valid. But I'll let google decide. It has a way of bringing up valid results to the top of search results.

Science has now been largely democratised. More useful information regarding health matters is found on google than in any medical textbook. Patient's questions/ answers on google/ open discussions – all these have made the task of finding existing truth much easier, and also of confirming new patient-led scientific discoveries.