More resources on the most dangerous irrational “principle” of all time: the precautionary principle

I’ve written a LOT against this “principle”, e.g.

The irrational “precautionary principle” marks the end of The Enlightenment

The Cult of Precaution

You can be too careful

END_OF_DOCUMENT_TOKEN_TO_BE_REPLACED

An illustrative fear-removal experiment in Newcastle, NSW by Mark Armstrong

REPORT RECEIVED BY MARK ARMSTRONG. EVERYONE CAN DO IT.

The above [below] signage I have been using in Australia day 2021 in Newcastle NSW.

I have been doing the same thing on most Sunday afternoons for maybe 2 or 3 hours. The small flag upside down as a sign of our nation in distress, but no one has asked me about the flag. I usually secure my bike to the pole and display the signs and sit back about 5 or 6 meters. Most people walk by and glance or some have a second look, some stop and read, then if they have taken the time to read, I will gently and in a friendly manner say ” have you ever asked yourself any of those questions”. At this point they will say no thanks or a conversation will take place.

If you check the sign you will see there are 13 questions not statements, but it gets people thinking. I have spoken to old and young. There is also a few websites displayed of which I have recently added reignite democracy and discernible. I usually have some copies of “cops for Covid truth” which I also talk about.

I have been to the local stand in the park but it’s on at 10-11 on Sundays when I am usually at church.

I think your Idea is right we need to be out there in the public domain, being seen and sparking the interest to challenge the narrative. If action like yours and actions like mine was multiplied we could quickly get the message out to those that count. Needs to be grass roots and authentic.

That is encouraging those that are already awake and more so waking up that are not. Notice question 13 as to what can be done. 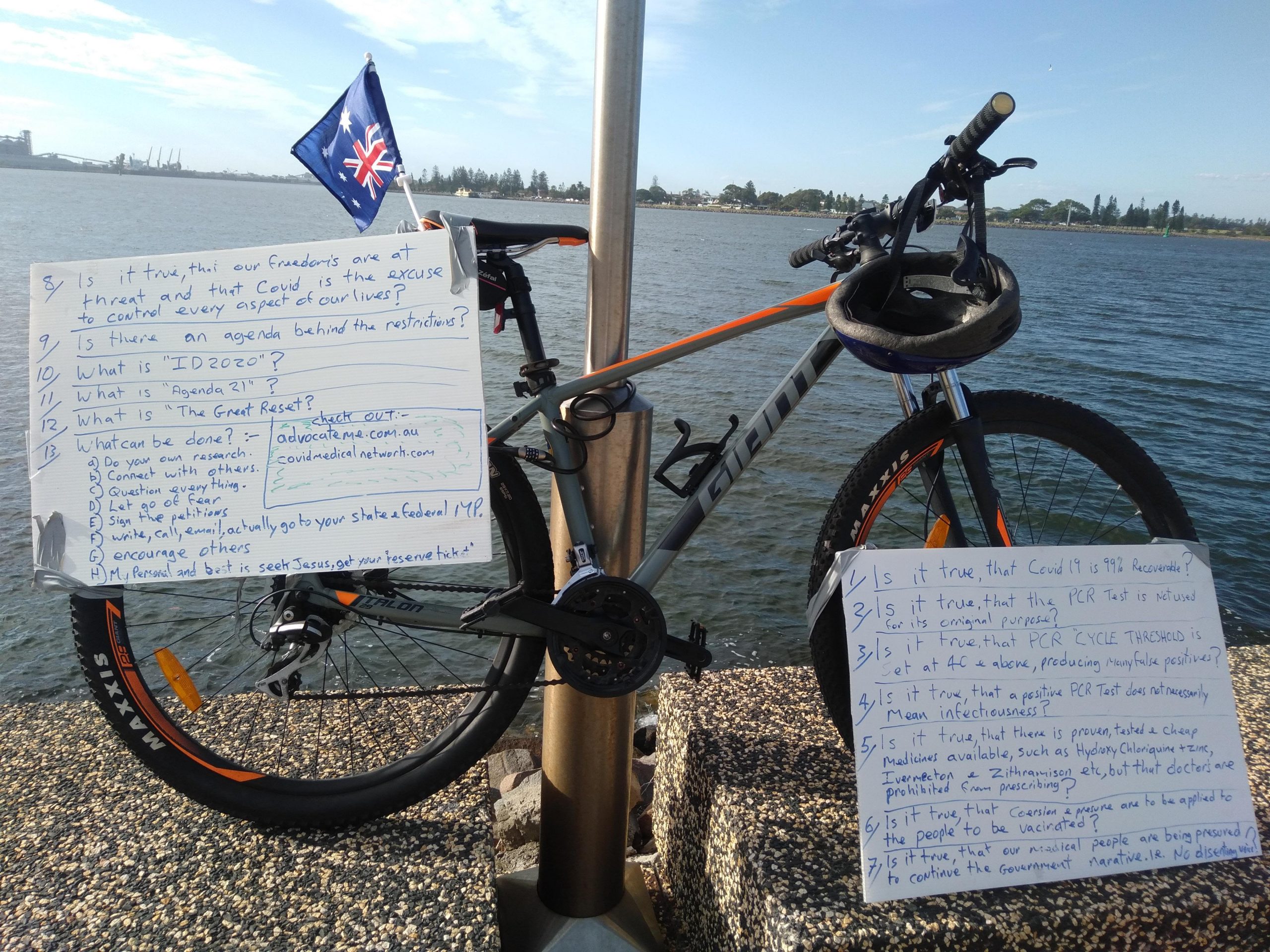 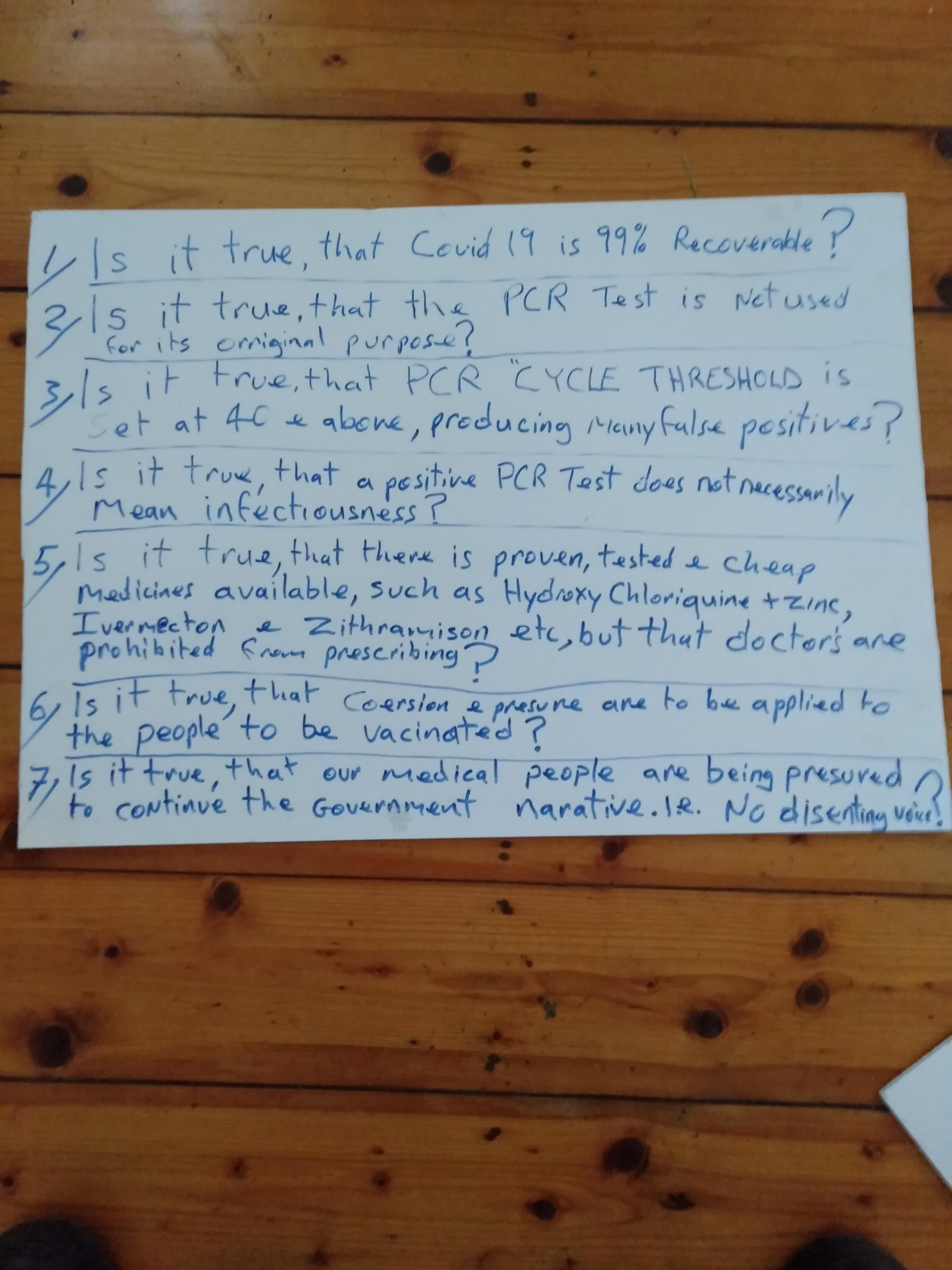 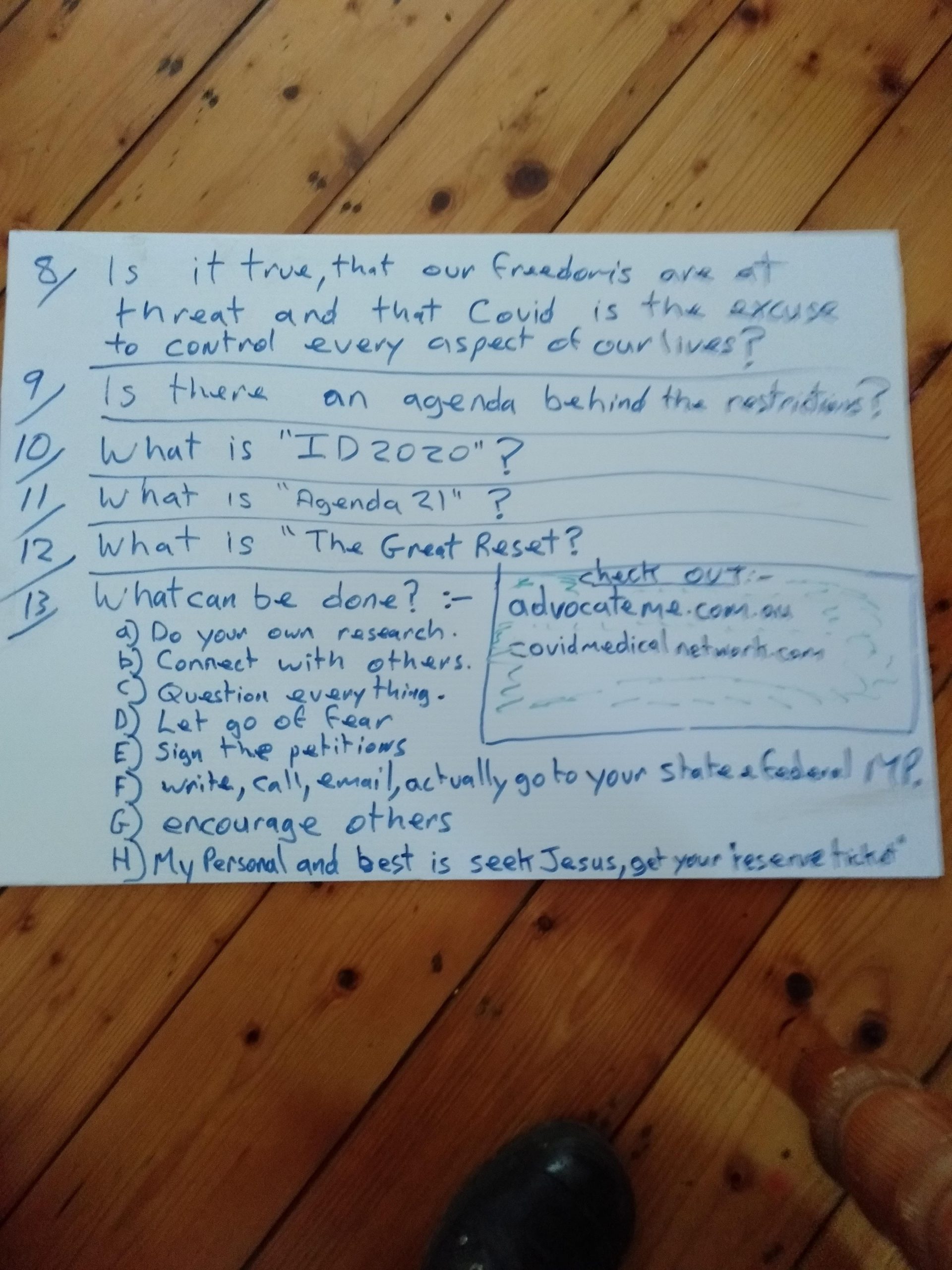 END_OF_DOCUMENT_TOKEN_TO_BE_REPLACED

CCP’s ROLE IN THE 2020 EVENTS, AND GROWTH OF THE SURVEILLANCE STATE IN AUSTRALIA

On 4 January 2021 I wrote a piece in Times of India and made a video a few days later re: CCP’s role in the hysteria and other events of 2020.

This was followed by a 40-page Open Letter which I co-signed and other article/info – see this.

On 17 March 2021 I published this “Victoria’s DEEP LINKS with China under the Dan Andrews government” based on inputs received.

Today I’m publishing this 13-page document “CCP’s ROLE IN THE 2020 EVENTS, AND GROWTH OF SURVEILLANCE STATE IN AUSTRALIA” – download here.

END_OF_DOCUMENT_TOKEN_TO_BE_REPLACED

Update on PTSD-like fear among Australians

As you might know, I resigned my government job to protest the police state in Australia, wrote a book, a complaint to the ICC, many articles, came on TV, but with none of these having an effect on the draconian policies of Scott Morrison, have decided to enter politics.

As part of this exercise I’ve been going around my local shopping centre to try to undo the hysteria in the minds of the people. An ongoing report on the toolkits I’m using for my experiments along with reports on what I’ve been finding – at https://teamaustralia21.org/first-we-must-rid-australians-of-the-fear-that-has-been-drummed-into-them/

After three experiments to date I believe that our criminal politicians have made most Australians mentally ill – the harms from which are even more severe than what I had once anticipated. We may not have enough psychiatrists in the world to undo the mental illness induced by our politicians.

I find most Australians I meet presenting like patients with PTSD who are shell-shocked, in mortal fear and under the greatest possible stress. Their eyes display the deepest possible fear of “something in the air” even though Australia has had virtually no cases of covid for many months.

I suspect such people may never be retrieved and returned to normalcy – so deep are the grooves of fear etched into their brain.

A small proportion of the people I meet are willing to listen to reason but the vast majority don’t want to come anywhere near the facts. When presented with the facts they reject them and go off on a tangent.

Our criminal politicians who have brainwashed the people have benefited from the hysteria – but I fear this brainwashing is causing severe long term mental harm. In any case, this is not how public health should be done.

I’m also copying Neil Ferguson whom I’ve been in touch with in the past. Unfortunately I’ve concluded some time ago that Ferguson is a key contributor to the crimes against humanity being committed by governments worldwide. Ferguson – I ask you to look within: what have you done to the world?