Why is our Bureaucracy so Inept? #1 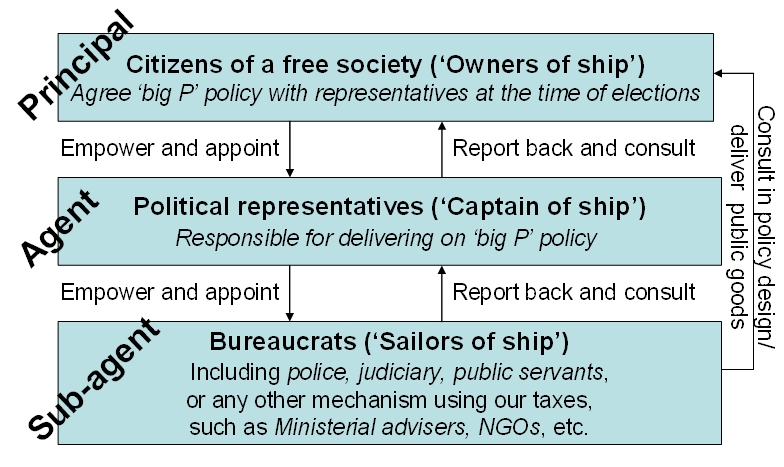 This relationship between citizens, who are the sovereign principals in a free society, and their agents and sub-agents is depicted in the diagram below.
For a free society to have a good Bureaucracy is almost as important as having a good political leadership. But India’s bureaucracy falls well short of international best practice. Indeed, to say that our Bureaucracy is sloppy, sluggish, inefficient and therefore ineffective is perhaps an understatement. It won’t do us any good to get outstanding political leaders generated by the reforms outlined in the previous chapter and then force these leaders to use the shabby Indian bureaucracy to deliver results.
Having used the term Bureaucracy (do note the capital B, though) in an unusually broad sense so far, I’ll now revert the use of this word to its more common meaning, namely, as the public services. Within the Indian public services, I’ll focus almost entirely on public service leaders, primarily on the Indian Administrative Service (IAS). Pranab Bardhan, a well-known Indian economist, has rightly suggested that we should create a structural shift in the level of internal competition in the bureaucracy. ‘It is anomalous to expect [economic] reform to be carried out by an administrative setup that for many years has functioned as an inert, arbitrary, heavy-handed, often corrupt, uncoordinated, monolith. Economic reform is about competition and incentives, and a governmental machinery that does not itself allow them in its own internal organization is an unconvincing proponent or carrier of that message.’[i] To advance Bardhan’s perfect diagnosis, I will compare and contrast the Indian and Australian bureaucracies, having worked in them for a combined period of over 25 years.
The first thing to note is that the quality of personnel who hold leadership positions in Australia is significantly better than their Indian counterparts. This difference magnifies even further at the lower levels of the bureaucracy. Australian bureaucrats are significantly better in leadership skills and possess not only extensive specialist policy knowledge but also impeccable personal integrity. The Australian delivery of governance services is superior because its public service leaders are outstanding. By no means do I imply that public choice theory does not apply to Australia. Indeed, most civil servants here, as anywhere else, behave in a manner entirely consistent with such theory. But carefully designed incentives have ensured that their self-interest is aligned with the public interest. In particular, contractual appointments at the senior levels and absence of tenure ensures alignment with political representatives’ policy goals. Further, internal competition ensures that only the best public servants rise to the top.
In India, on the other hand, while we pay attention to the principles of competition and merit in assembling our cricket team, which is therefore internationally competitive and can even beat Australia on a good day, we do not apply such principles to our bureaucracy. This has led to the vast chasm that I have noted above in the performances of these two bureaucracies.

[Note:This is an extract from my book, Breaking Free of Nehru]

Recently I had an email conversation with a friend who works in the World Bank. (She did her doctorate in economics along with me in the late 1990 from the University of Southern California and has been with the World Bank since then).

In her email she referred to India's sterling performance in attracting private sector funding for its infrastructure and sought my views on this phenomenon. Since I have spent the last ten years focusing on governance reforms and on regulatory policy, I have not spent too much time on infrastructure issues.

But I scanned google and she is right. India has been very successful in attracting private investment in telecom, transport (air, mainly), and energy (including nuclear) through public-private partnerships. The airports of Bangalore, Hyderabad, Mumbai, Cochin or Delhi are an example of the transformation that is occurring in this space in India. [A useful paper on airport privatisation: here]

[Of course, India continues to have very bad policy as well in this area, such as the shoddy "modern" airport at Kolkata where the government refused to involve the private sector. I speak from personal experience of having lived overnight in one of the rooms of Kolkata airport earlier this year, and it was the most disgusting experience one can imagine.]

Here's a quick summary of the situation, extracted from various sources on the internet today.

The pathetic state of infrastructure in India

"[N]ot a single city in India receives water for 24 hours a day. At the same time, peak power shortages remain in the double-digits at 12%. And the average turnaround time at ports is 3.85 days compared with 10 hours in Hong Kong. The road situation is not much better. According to a McKinsey report, India’s road quality is well below global standards – only 25% of national highways are two or four lanes and close to 90% of highways are structurally inadequate to support truck loads of more than 10.2 tons." [Source]

Comparison of infrastructure – India vs. China

"The Indian Budget for 2010-11 has proposed to simplify the FDI regime, maintaining FDI flows particularly by recognising ownership and control issues and liberalising the pricing and payment system for technology transfers, trademarks, and brand name and royalty payments. More importantly, the budget shows an intention to introduce user-friendly regulations and guidelines for FDI." [Source]

Up to $1 trillion in infrastructure on the anvil, half from the private sector

"The government’s next five-year plan, starting in 2013 looks set to include $1 trillion of infrastructure development, with around half of this likely to come from private funds. This follows the $300 billion set to be spent in FY11 and FY12." [Source] "Nearly 30 per cent of the total spending on infrastructure sector during the first three years of the 11th Plan period has come from private sources. As we go into the next Plan period, we expect this proportion to go up to nearly 50 per cent," said Mr Mukherjee at the India Investment Forum. [Source]

"Easier access to capital, attractive fiscal and tax incentives, a fixed rate of returns and a greater ability to pay user charges as a result of improved economic growth are some of the factors attracting private investors into India’s infrastructure sector. Public- private partnership is emerging as the preferred instrument for bridging the infrastructure deficit. India’s experiment of promoting public-private-partnership projects has yielded good results. The progress of the telecom, power and aviation sectors in the last few years is testimony to this fact. " [Source]

(Before I move on to an overall analysis of the situation, let me mention in passing that Victoria's public-private partnership program (see the website here) is considered to be one of the world's most advanced and successful programs, with 21 projects worth around $10.5 billion in capital investment. Should my friend be interested in pursuing this idea further she could visit Victoria to find out more about how this program works).

In my view, despite these positive efforts, India is seriously governance-constrained, leading to an inability to provide education, health, water, sanitation, and energy. That is where my focus has been – on building the governance capability and systems that will then deliver the rest of the detail. Our governance holds us back. That is why I have spent my energy on this issue and will continue to do so. The reform of infrastructure is one part of the story of reforms needed in India, and we are simply not even one tenth through that journey, yet, with mega-corrupt and incompetent political parties governing India.

I remain convinced that a (classical) liberal political outfit is needed to bring true reforms of governance to India. The task at hand is simply too great to be achieved by tinkering at the margins. That is why I have worked only on building a liberal political party for India – something we have not had since the Swatantra Party was disbanded in 1974. To achieve that end there is now in place the Freedom Team of India where India's future leaders are currently assembling.

The kind of governance reforms that India needs (and most developing – and developed countries too!) are outlined in my book, Breaking Free of Nehru. That is what I'd like everyone to consider. The rest of the things will fall in place once the governance systems are reformed.

END_OF_DOCUMENT_TOKEN_TO_BE_REPLACED

The IAS must go

Let me emphasise once again that India cannot achieve its potential just with so-called capitalism which is often (but wrongly) understood to mean (only) economic freedom. Without an appropriately designed machinery of governance, there can be no capitalism.

Apart from reforms to India's economic policy, therefore, VERY significant reforms are needed in the way we elect and remunerate our politicians, and in our bureaucracy.

I have outlined the reforms to the electoral system and bureaucracy at some length in BFN (chapters 4 and 5), and encourage you to go through these chapters in detail. In addition, I have summarised the reforms needed to India's bureaucracy in an article in the Times of India and a later article for Freedom First.

PIease read these to appreciate the outlines of the system of bureaucracy that India needs so it can effectively deliver the few objectives of a good government in India.

In brief, as you will note, the IAS must go. That COLONIAL system of bureaucracy is so badly antiquated and ineffective that it amazes me why we have not replaced it with a functional bureaucracy.

END_OF_DOCUMENT_TOKEN_TO_BE_REPLACED

A short history of public services in India and England

I'm extracting below a section from BFN's Online Notes. Those who have read my book know that at the behest of the publisher I had to remove a significant chunk to make the book shorter. The remaining material, below, relating to the history of India's public administration, was excluded from the main book and is available online. It has not undergone the editorial scrutiny of the publishers and has more spelling errors than BFN does.

It is important, I believe, that we all make an attempt to understand the history of India's public administration. Doing so will show us how India's administration has failed to keep pace with changes and why has India now has one of the world's worst administrations.