This is my fourth comment (very brief) on Swaraj and Prashant's urge to nationalise as many thing as he feels are not suited to the market.

Nationalisation is the EXTREME form of centralisation.

And price fixing is an EXTREME form of centralisation.

With such a model in mind (100 per cent socialist), why talk about decentralisation?

Such "sweet" words don't get past me. I see right through these strategies to gain greater and greater control over the lives of people.

There is a TOTAL CONTRADICTION between the "sweet talk" of decentralisation (Swaraj at the village level) on the one hand, and SUPER-CENTRALSIATION (nationalisation, price fixing) on the other.

Let it be known that Arvind and Prashant are promoting UNADULTERATED SOCIALISM.

Within the capitalist framework there is very significant decentralisation – subsidiarity – but that too is VERY SEVERELY constrained.

A government has no license to curtail liberty EVEN at the local level. Nowhere. Never.

The government must be kept TIGHTLY under the leash. Democracy must be tightly limited in terms of the subjects and topics it can pass judgement on. Democracy is not license to destroy liberty. 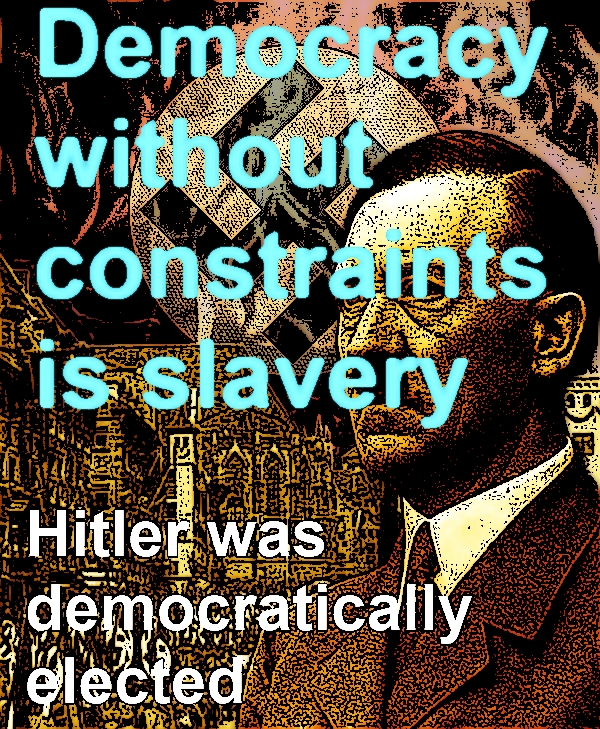 END_OF_DOCUMENT_TOKEN_TO_BE_REPLACED

This thing about Swaraj needs to come to a head. I've been debating offline with an Arvind Kejrwal "supporter" who is surprised that I don't "get" it that Swaraj is a great idea.

Here's an extract from my response


Swaraj is a total non-starter without clarification about what precisely is allowed to be governed.

Swaraj is about independence. Self Rule. In my book, Discovery of Freedom (manuscript) I explain at great length why this is a minor and largely irrelevant part of the meaning of liberty.

Swaraj made sense in 1910s when British ruled India. It also makes a little sense even now (due to lack of full implementation of grassroots democracy), but that is such a trivial issue.

Independent decision making is a very TINY part of the classical liberal framework. It is necessary (but if you understand Hobbes, even Chanakya, it may not even be necessary if you have a perfect dictator who ensures liberty and the rule of law). But it is simply insufficient.

Defence of liberty is why we allow ANY form of state.  Period.  Arvind Kejriwal has NO theory of state.

In brief, if you don't know WHAT can be governed, and WHY, then "self-rule" is code for dictatorship by mobs.

It is a DANGEROUS thing to be ruled by mobs.

That is why the classical liberal insists on constitutional safeguards for liberty.

ONLY within the framework of greater liberty can Swaraj make ANY sense. But clearly IAC is full of socialists. They want to REDUCE LIBERTY DRASTICALLY.

Their Swaraj will be licence for the DESTRUCTION OF LIBERTY IN INDIA.

You are right that prashant bhushan is a hard core socialist. I raised the question in today's meet. He answered straightly, "that they will nationalize almost all firms(like power,steel and many others), but in some sectors he said they will keep free markets." if they come to power.

I told them that socialism is the mother of corruption. And told him that there is no developed country in this world which has adopted socialism. And told him the example of hong kong and indonesia. But he said that after liberalisation and globalisation the amount of corruption has increased. He said before 1991 there were scam like bofors which are were of less amount. But after liberalisation amount of corruption has multiplied by 'n' times.

Earlier if 100 crore business was given permission 10 crore would be the bribe but now politicians are getting bribed in multi crore through 2G, coal and etc etc. He says that all the recent multi crore scams are because of liberalisation and globalisation.

He didnt give me chance to reply back. He said this is only Q&amp;A session and not debate. He was taking question from audience and giving answers. But didnt allow us to debate on our stand. He didnt see whether he was satisfying all questions or not:(

So i guess that arvind and bhushan feel that scam amount has increased becuase of liberalisation and globalisation. I guess they have understood the problem wrongly.