Oil is “infinite” and here’s why (because soon no one will want it).

There is continuing misapprehension among the improperly educated (which is most of the "educated") that resources are "finite".

Giving examples doesn't seem to help such improperly educated people, so how about a bit of trivial algebra:

The remaining number of years of supply = S/0 = ∞ [i.e. at least till the solar system blows up]

Does that make sense to the world's millions of improperly educated people?

In brief, EVERYONE needs to understand TWO basic things about resources:

1. Resources are ONLY things that humans use (demand). Things we don't use are NOT resources. A pile of mud is not a resource until someone wants to use it to fill the foundation of his home. When there is NO demand for a  "resource" its supply effectively becomes INFINITE. It might instead become a nuisance.

2. When resources become "scarce" (because these are being used for a particular purpose)  then humans will BOTH recycle the resource (e.g. the mud from below one's house will be used after 40 years for a second house) or substitute it (use stilts instead of mud). The price system and technology both influence and react to the "scarcity" to ensure both these options. HUMANS are adaptive animals. They are not stupid.

Indeed, when technology changes sufficiently, things considered to be "resources" at one time can suddenly no longer be needed. They can quickly become a nuisance.

When we use oil, we want ENERGY. We can replace it with a million other things. Anything that produces energy is fine. And there are at least 1000000 alternatives.

As a result of alternative technologies and more efficient ways to use oil, the oil DEMAND is now dropping on a per capita basis. In the next 10 years the GLOBAL demand for oil could very well peak.

No matter how much human population grows thereafter (and human population is GUARANTEED to fall dramatically as the level of freedom increases), oil consumption will keep falling incrementally till finally oil will only be used for a few minor things.

Oil SUPPLY is virtually infinite (at least 100 times more than currently known "reserves"), and demand is already starting to fall.

S/D (for oil) will increase sharply and tend towards INFINITY.

It will have the same fate as coal and the steam engine. Basically junk.

Don't believe me? Even now!!

END_OF_DOCUMENT_TOKEN_TO_BE_REPLACED

Julian Simon on the firing line! MUST see

A few weeks ago I ordered the full video of Simon on the firing line from Amazon. A short snippet is available on Youtube (below).

I STRONGLY recommend that you order and watch the full video. The brilliance of this man Simon will amaze you. I promise!

Don't forget to read my other posts on Simon, including:

And DON'T FORGET TO JOIN THIS FACEBOOK PAGE I'VE CREATED FOR JULIAN SIMON!

END_OF_DOCUMENT_TOKEN_TO_BE_REPLACED

Here’s an entire chapter from Julian Simon’s The Ultimate Resource II (Word version here -3MB). Even today, with data on the safety and viability of nuclear energy widely available, widespread aversions to nuclear energy exist across the world. It is time to understand the facts.

Nuclear power is fundamental to a discussion of energy because it establishes the long-run ceiling to energy costs. No matter how much any other source of energy costs us, we can turn to nuclear power at any time to supply virtually all our energy needs for a very long time. Therefore, to put all other energy issues into a proper long-run perspective, we must discuss the height of that cost ceiling and the practicality of nuclear power – including its dangers.
By now there is sufficient experience – several decades’ operation in several countries – to prove that nuclear plants can generate electricity at costs that are of the same order as, or lower than, the present costs with fossil fuels. Whether nuclear power is considerably cheaper (say 80 percent of the cost of fossil fuels), or about the same cost, or somewhat more expensive (say 120 percent of the cost of power from fossil fuels), matters greatly to producer-sellers of electricity. But to the consumer it does not much matter. What does matter is that the calculations do not matter. It will not affect our future lives greatly whether electricity is, say, 20 percent more or less expensive than now. Of course, an electricity bill 20 percent higher than now would not be pleasant. But it would not lower the standard of living noticeably. Nor would an electricity bill 20 percent lower than now make appreciably richer the inhabitants of developed countries. And the longer one looks into the future, the smaller will be the percentage of the total budget devoted to electricity, as our total incomes grow, and the less important to the consumer will be the production cost of in-the-home electricity with nuclear power.
Fission is the source of nuclear power at present. But in the longer run, much “cleaner” nuclear fusion may well be practicable, though physicists cannot yet predict with certainty when – or even whether – fusion will be available.
If fusion becomes practicable, the possibilities are immense. By Hans Bethe’s estimate, even if we assume energy consumption a hundred times greater than at present, “the heavy hydrogen supply of the world will be sufficient to give us power for one billion years,” at a price perhaps equivalent to that at present for fission power.
NUCLEAR POWER, DANGER, AND RISK AVERSION
The Dangers of Nuclear Power.
Because we (luckily) do not have experience with many nuclear mishaps the way a life insurance company has available data on millions of lives, estimating the dangers from a nuclear mishap must derive from scientific and engineering judgment. Hence laypersons such as you and I can do no better than consult the experts. And there is necessarily some controversy among the experts because of the absence of mishaps which would provide solid statistical evidence.
A section later in this chapter discusses some of the problems that arise in responding sensibly to risks of various kinds.
When evaluating the safety of nuclear power, it is crucial to keep in mind the risks to life and limb that arise in producing energy from other sources – such as drilling accidents at oil wells, mine disasters, and the pulmonary diseases of coal miners.
All would agree that nuclear power’s past record has been remarkably good compared with the best alternatives, along with its economic advantages. The extraordinary safety record in nuclear submarines over several decades – no evidence of any damage to human life from radiation despite the very close proximity of Navy personnel to the nuclear power plants – is compelling evidence that nuclear power can be remarkably safe. Furthermore, the safety of nuclear plants has been improving rapidly, as figure 13-1 shows – progress which would not be possible if opponents of nuclear power were able to prevent reactors from operating. Nevertheless, evaluating the risks of nuclear disaster is subject to argument. The contradictory conclusions of the authoritative report from the National Academy of Sciences, and of anti-nuclear critics, were cited in chapter 12. 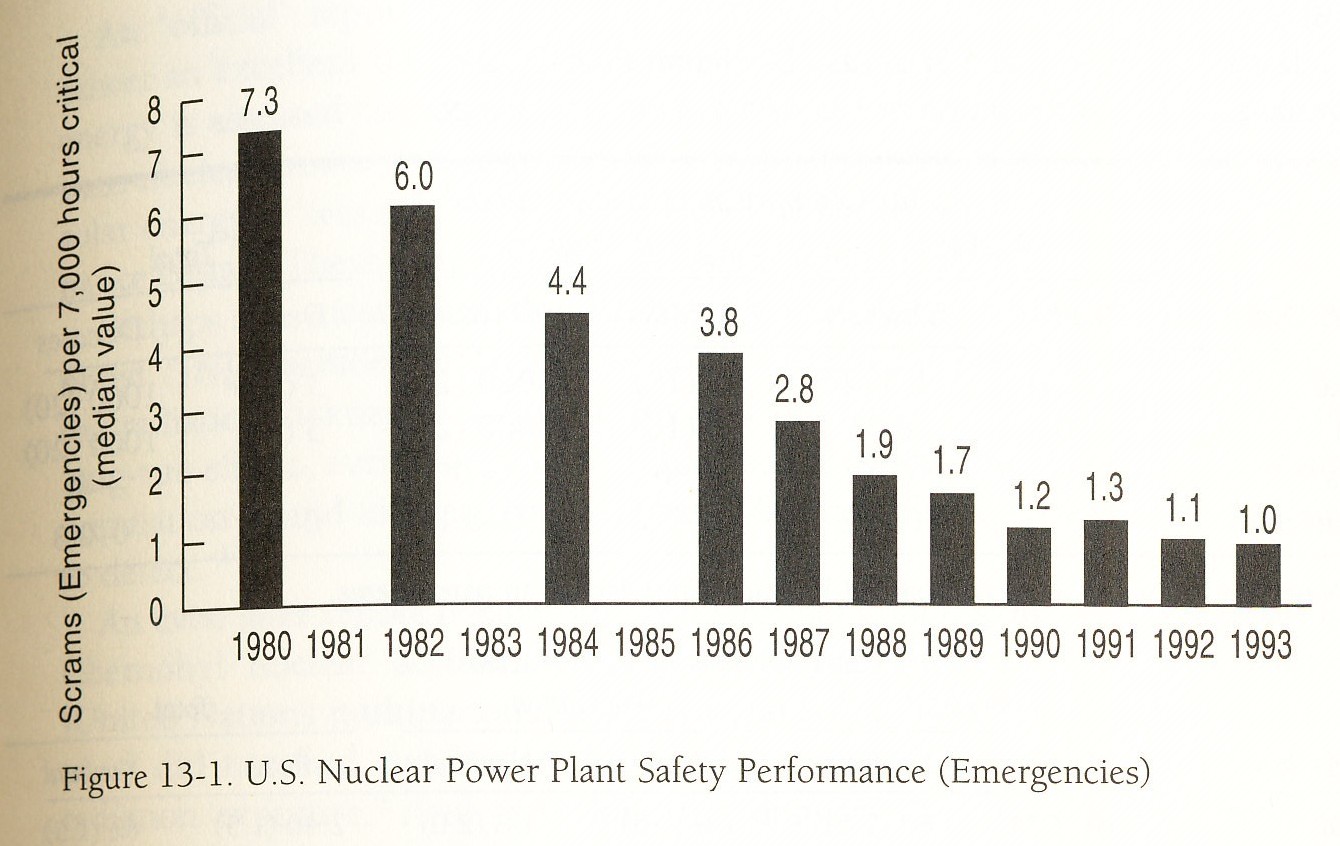 (Figure 13-1 from INP 1991 Report)
Though it is not possible to establish their validity without entering into extensive technical analysis, these two assertions can safely be made: First, a nuclear plant cannot explode any more than can a jar of pickles, as physicist Fred Hoyle (with Geoffrey Hoyle) put it. (Chernobyl is no exception: it was not a nuclear explosion.) Second, the problem of safeguarding the processed waste from year to year is much less difficult than is safeguarding the national gold supply at Fort Knox, and much less risky than safeguarding against terrorist explosions of nuclear weapons. More about nuclear waste below.
Best guesses about the dangers from various energy sources are shown in Table 13-1. There is general agreement, too, that nuclear reactors in the future will utilize now-existing designs that are safer and easier to operate than earlier designs. 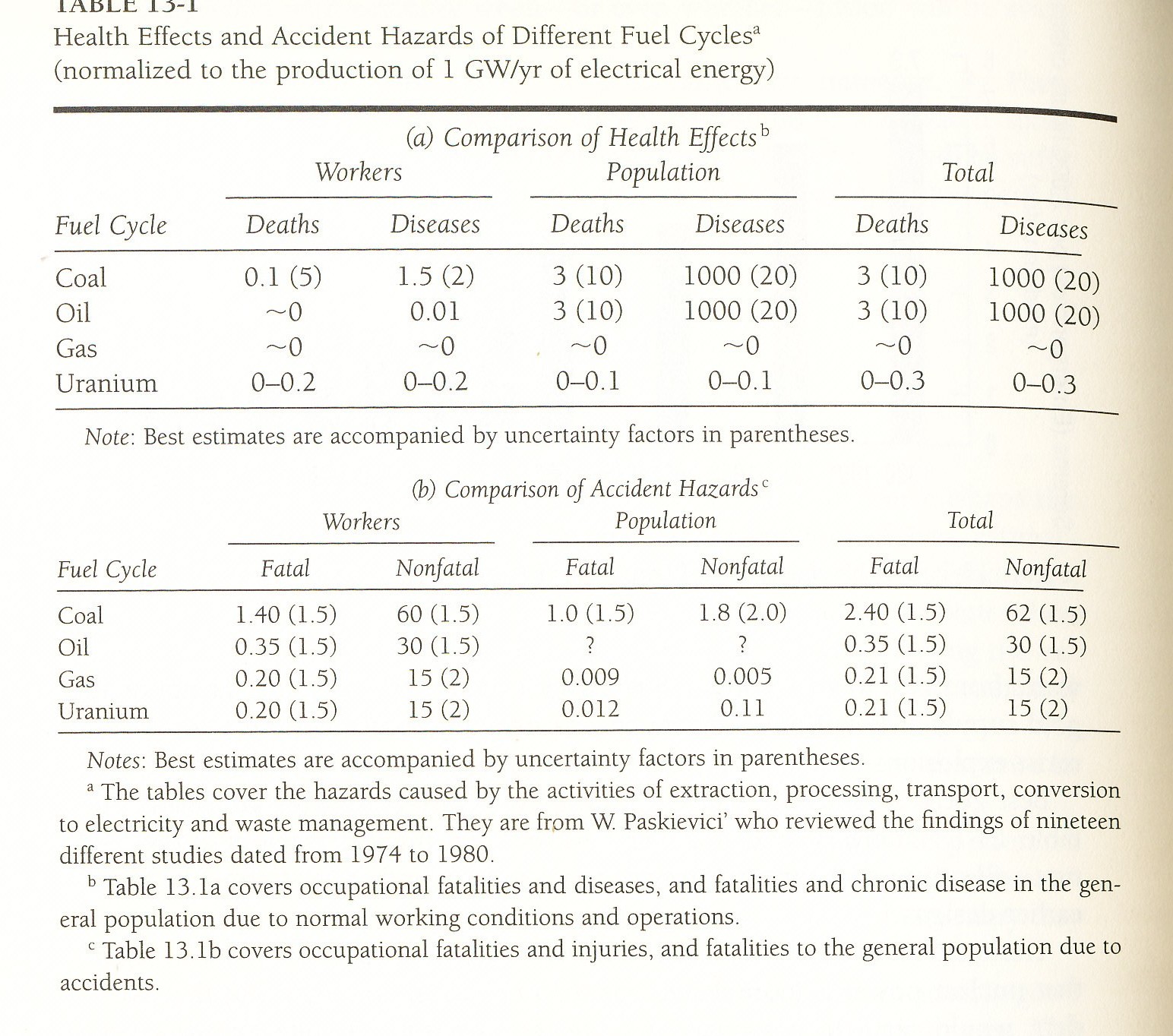 Energy from nuclear fission is at least as cheap as other forms of energy, and is available in inexhaustible quantities at constant or declining prices. Its safety record in the West shows it to produce energy at a lower cost in lives than any other form of energy, on average. The opposition to it is mainly ideological and political, as indicated by the headnote to this chapter by Paul Ehrlich, and by this statement by the noted activist, Amory Lovins: “[I]f nuclear power were clean, safe, economic, assured of ample fuel, and social benign per se, it would still be unattractive because of the political implications of the kind of energy economy it would lock us into.” The aim of such writers as Lovins is not increasing the availability of energy and consumer benefits, but decreasing the use of energy for supposed environmental gains and beliefs about the morality of simple living. This may be seen in the headline, “Improved Fuel Efficiency Negated by Glut of Cars, Trucks.”

END_OF_DOCUMENT_TOKEN_TO_BE_REPLACED

The pitfalls of forecasting

Unless one takes a truly long-term view, and thoroughly understands the entire range of impacts, including  stabilisers, adjustments, substitutions, interactions, and the lot, it is best to avoid forecasts on complex matters. We can talk about trends, and tendencies, but not precise estimates of what is going to happen.

The number of constantly changing forecasts by the IMF during the past three years should have led it to shut down its delusional macro-economic forecasting branch, but forecasters always manage to  avoid taking responsibility (much like climate change "scientists" who manage to receive public funding even after making the most absurd forecasts!).

Here's Julian Simon on the pitfalls of forecasting

This is what Julian Simon had to say about forecasting (source).

Despite those reservations about technical forecasting, I shall briefly survey the results of some of the forecasters, mostly in their own words. My aim is to show that even with relatively “conservative” guesses about future extraction developments, many of the best-qualified forecasters report enormous resource availabilities – in contrast to the scare stories that dominate the daily newspapers. The central difficulty again is: Which expert will you choose to believe? If you wish, you can certainly find someone with all the proper academic qualifications who will give you as good a scare for your money as a horror movie. For example, geologist Preston Cloud has written that “food and raw materials place ultimate limits on the size of populations … such limits will be reached within the next thirty to one hundred years”, and, of course, not too many years ago the best-selling book by Paul and William Paddock, Famine–1975!, told it all in the title.