Everyone know that I'm highly unimpressed by ANY of the "standard" parties. I've worked inside government and know precisely how they operate. Not only are both Congress and BJP entirely socialist and statist, they are THOROUGHLY corrupt.

I gather the good news that Congress is on its death bed. I hope the Indian voter throws Congress into the wastebin of history. What a DISASTROUS party for India. This Friday, its death knell should ring out loud and clear across India. Good riddance to bad rubbish.

But BJP is EQUALLY corrupt and evil. I have repeatedly shown how BJP's ideology is socialist-fascist, and it is an unqualified danger to India.

For those still wiling to live in their delusions that BJP will somehow fight corruption, here's FURTHER proof from the horse's mouth (well, almost: as close as evidence gets in such matters):

"A relative of mine, BJP worker, confided in me that he personally distributed 18 lakhs in the area covering a few wards" [Shanthala Damle, former LSP member, now AAP – a statement made on Facebook]

Btw, I believe Shanthala Damle is VERY VERY wrong to believe that socialist AAP can POSSIBLY help India in any way. But I'll leave her to her delusions. What is clear is that she is NOT lying. This statement about BJP’s corruption and black money is a FACT.

END_OF_DOCUMENT_TOKEN_TO_BE_REPLACED

Despite the RIDICULOUS claims by BJP that Bangaru Laxman was acting on his own accord, not BJP's, the BLATANT TRUTH, THAT IS KNOWN TO ALL, is that BJP is a thoroughly corrupt party.

Any attempt by BJP to deny this can fool the dunces among the "intelligentsia" (of which there are plenty) who do not know how India's governance actually works, but can't fool the common man (like me).

There is just too much evidence – starting from the expenditure of CRORES OF BLACK MONEY during elections – for BJP to pretend that it is not a deeply corrupt outfit.

Even a wolf in sheep's clothing can fool us. Not BJP.

END_OF_DOCUMENT_TOKEN_TO_BE_REPLACED

Please note that BJP is a total chamcha of Nehru. Let’s never forget that.

Just to clarify my position, this snippet from a FB conversation:

I downloaded your book BFN and read upto 70+ pages , This is eye opening book for every indian . I also always thought the root cause of all present problems of india was Nehruvian Policies. This dyansty has eaten india's precious 60 years those were enough to put India on top of the world map.

Thanks, XX. It is not the dynasty issue that I'm talking about. That's an issue, but that's secondary. The main issue is socialist policies. And you'll note that in the book I point out that ALL political parties are godchildren of Nehru and follow his policies. BJP follows socialism, reservations, etc. Not ONE thing different to what Nehru said.

END_OF_DOCUMENT_TOKEN_TO_BE_REPLACED

In mid-1975 I had finished year 10 and was going into year 11. A little later, the Emergency was declared. I was very angry at the turn of events.

In particular, I had been very angry at the idea of forcible sterilisation, and in deep anger (before the Emergency) painted the following painting, that points my RED, HOT, BIG finger at Indira Gandhi for her many crimes, including impoverishment of the people and HER DASTARDLY, COERCIVE family planning programme (see the red inverted triangle made by the elbow of the poor sick man)

When Sanjay Gandhi died, I was THRILLED. This man, who could have become India's dictator, fortunately self-destructed.

And so, when the Janata Party came to power in 1977, my joy was unbounded. I recall spending hours at the public display of national electoral results in Jullundur (it was manually updated as the results came in, by the election office), and being in great joy that the tyrant Indira Gandhi had been DEFEATED by the people of India (since that day I vigorously oppose the slightest suggestion that the Indian voter is cheaply "bought" out by liquor or money). 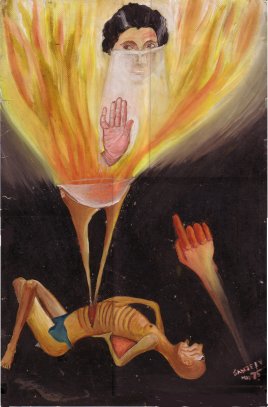 But, of course, little did one realise that the Jan Sanghis who constituted the Janata party (along with left-overs of the defunct Swatantra Party and some stragglers from a few socialist outfits) had in their midst people with a desire to become Sanjay Gandhi themselves.

Remember that Jayaprakash Narayan (the original one!) had long since become an enemy of communism, and seriously questioned socialism. He did not advocate modern capitalism (which he surely did not understand) but was as much a classical liberal by the 1970s, as Gandhi had been.

In that sense the Janata Party, while socialist in its public comments, was very wary of government intervention. Morarji Desai had personally found much to question socialism, and had lost his fascination for the USSR, unlike Indira Gandhi, who lived off the droppings of USSR's rulers.

Had the Janata experiment not self-destructed due to idiotic and clownish leadership, it held the seed of a new India. But that was not  to be.

Unfortunately, when Janata split asunder in the late 1980s, one of its branches, the BJP, became TOTALLY TOXIC.

BJP is toxic at many levels. It is anti-Hindu. It wants to take India back to the middle ages. It is a proponent of the deadly philosophy of Hindutva (no matter how much this philosophy is diluted, as has been happening for decades, it simply can’t lose its poison).

But now BJP is becoming A MIRROR IMAGE OF SANJAY GANDHI –  the greatest enemy of the Indian people.

BJP in Madhya Pradesh has done many evil things, but the most evil is this:

Shyam Lal, 16, Kol tribal, Rewa Forcibly sterilised on February 16. Was told that he was being treated for fever. Abandoned by the doctor in an unconscious state, had to walk back home after spending the night out in the fields. Has not been compensated for being sterilised by the district officials at Rewa.

A bewildered Shyam Lal is back at hospital, having developed abdominal pain after the ‘procedure’. He’s at the Sanjay Gandhi Memorial Hospital, and surely unaware of the irony that it bears the name of the man who gained notoriety for running the famous nasbandi (sterilisation) campaign during the Emergency years of 1975-77. [Source]

Find out who sterilised this man. Find out who is sterilising thousands of innocent tribals, being "bribed" by "Rs 600 and a six-yard saree" and KILL THEM ALL. Each and every such doctor.

This makes my blood boil. The forcible sterilisation of people. As if they were CATTLE.

Rape is a heinous crime. But forcible sterilisation is 1000000 TIMES MORE HEINOUS.

I want BJP to eject Shivraj Singh Chauhan from BJP membership at once.

The signs are all clear. This is a SECOND COMING OF SANJAY GANDHI, through BJP – the party that opposed such coercion in the 1970s.

Shame on you, BJP. I don't understand why such monsters (Chauhan) are not being killed outright by the people through a violent revolt against such extreme tyranny.

BJP talks about Ram and the Ramayana. Please show me one instance of Ram behaving in such a DASTARDLY manner.

Clearly, BJP is an enemy of Hinduism.

King of men! with sleepless watching ever guard thy kingdom flair,

Like a father tend thy subjects with a father’s love and care,

Be unto them like the rain-drop nourishing the thirsty ground,

Be unto them tree of shelter shading them from heat around,

Like the blue sky ever bending be unto them ever kind,

Free from pride and free from passion rule them with a virtuous mind!

This is what a Hindu ruler would aspire to be: A FATHER, WHO LOVES AND CARES.
Please sterilise YOUR OWN SON AND NEPHEWS FIRST, Chauhan, before casting an eye on others' sons.
And if India's "population" bothers you, PLEASE COMMIT SUICIDE. ONE LESS EVIL MAN. WE'LL CELEBRATE YOUR DEATH.
END_OF_DOCUMENT_TOKEN_TO_BE_REPLACED