An obstacle theory of development

I am preparing for a talk entitled, “Can India Catch Up? Can Australia Do Better?” – which, once I've delivered it and refined it a bit, I'll extract/summarise on this blog.

In this process, I've come to realise that development is all about removing obstacles to the technical frontier. The following diagram illustrates what I have in mind: 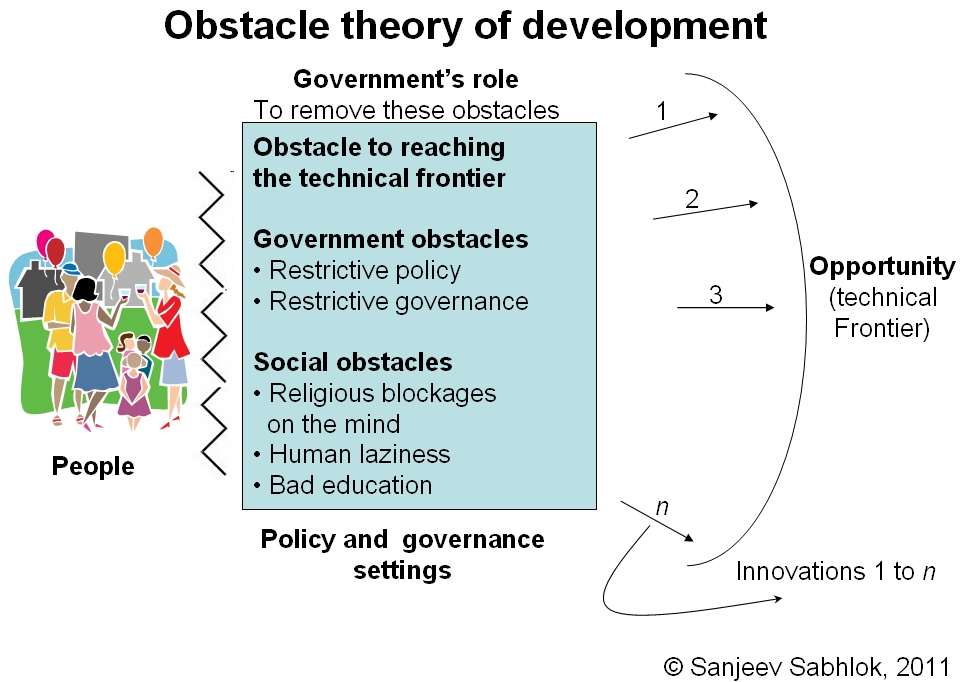 [PPT source]
What I'm trying to say here is very simple.
Recall that I've proposed here that
Growth = f(policy(F), governance(F), opportunity(F)) = f(F), where F = freedom.
"Opportunity" in the above equation reflects the distance to the technical frontier. For instance, India is very far from this frontier, the West is at the frontier; that is why India is so poor. The opportunity to reach the technical frontier always exists with the poorer nations. They simply need to copy what the leading nation is doing. No effort required to re-invent the wheel. However, they need the right policy and governance to achieve this opportunity.
So now the story becomes clear, as outlined below.
Each time someone (ANYONE, anywhere) innovates or invents something new, the HUMAN technical fronter is pushed outward.  For instance, the moment Edison invents something, or Einstein creates a new model of the world, the HUMAN technical frontier moves outward.
That, in effect, marks  the limit of human progress at a given moment.
If information and knowledge could transmit instantly, then all of us would always be at this technical frontier. Convergence would be instant.
But that does not happen. So what prevents a someone living deep inside a village in India from reaching this frontier?
That answer is (a) Government obstacles and (b) Social obstacles. The diagram above is self-explanatory.
However, it is worthwhile to note that humans are rationally lazy and avoid thinking, and therefore they tend to believe, not investigate.  I experience this daily on this blog where people keep insisting that their outdated beliefs are 'right'.  People would much rather believe in myths and stories (that are romantic and interesting) than put in the effort to master the hard science behind our existence. It is much easier to believe that God made us [zero thinking required] than to keep asking questions where we came from! And so on.
But laziness never gets anyone anywhere far. It is a recipe for mediocrity.
What is a government's job in this case? Good governance settings (policy and institutions) REMOVE Government obstacles. In general, this does not happen easily. Hence bad policy and bad governance are typically found, and since these have a lot of inertia, they are hard to change.
In addition, social reformers should be left free (no role for the government in this!) to remove religious/social obstacles.

Removing obstacles is the key

By removing obstacles,  people can be quickly released from bondage and can march up to the technical frontier. The key to development, therefore, is:
a) GET OUT OF THE WAY!
b) TEACH PEOPLE TO THINK.
In India's case, the game changed long ago, but many Indians keep harping and wasting time on outdated world-views (e.g. cow slaughter or some such thing), instead of putting in the hard work to learn more science and economics. Both the Indian government and Indians, generally, REFUSE to change.
Sorry, people, the world has moved on. We don't live in the medieval era now. Time to wake up!
END_OF_DOCUMENT_TOKEN_TO_BE_REPLACED

The great follies of Karl Marx and the socialists

Capitalism or the overall mechanism of freedom, which comprises free markets and democracy, is infinitely better than what Karl Marx (1818–83) portrayed in his 1848 Communist Manifesto. I would like to digress for a moment here and explore this rather interesting and earth-shaking discovery!

In political philosophy, the age of thirty at which Marx wrote his Manifesto is considered very young. Marx was a baby philosopher then; quite immature and unable to plumb the depths of the ambitions for freedom of the human spirit that philosophers who preceded him had first articulated. It can be stated with some confidence that political philosophers should try to gain life experience at that age, not pen inflammatory pieces that over-emphasize their ignorance. Unfortunately, through sheer repetition of the wild claims made by Marx in the Manifesto it appears that his deadly ideology of communism persuaded many people to stop investigating the truth about capitalism. Given the vigour of the Manifesto’s expression, Marxism became the new Gospel for many people, particularly its later avatars of Fabian socialism in India. And so Marx’s followers diligently killed or made poor millions of people for 150 years while at the same time claiming that capitalism was to blame for these deaths and poverty.
But let us look at Marx’s arguments more carefully, though briefly. It may come as a surprise to some of us, but Marx pointed out a number of good things about capitalism in his Manifesto even as he painted a gloomy picture of its allegedly insurmountable shortcomings. Marx said that ‘capitalists’ – a word which to him included industrialists, landlords, shopkeepers and pawnbrokers (but which to me is much narrower, meaning those who understand freedom) – were part of ‘the modern bourgeois society that has sprouted from the ruins of feudal society’. Now, at first blush it would seem that, if nothing else, sprouting from the ruins of feudalism is a step in the right direction. Capitalism was surely on to something! Some other quotations from Marx are noted below, with my comments italicized in brackets:

‘The bourgeoisie cannot exist without constantly revolutionising the instruments of production’ [technological innovation is good]. ‘[It also has] the need of a constantly expanding market for its products’ [this is a competitive and productive endeavour that enhances the wealth of nations].
‘The bourgeoisie, by the rapid improvement of all instruments of production, by the immensely facilitated means of communication, draws all, even the most barbarian, nations into civilisation’ [that is a great achievement, to be a civilizing force].
‘The bourgeoisie has […] created enormous cities, has greatly increased the urban population as compared with the rural, and has thus rescued a considerable part of the population from the idiocy of rural life’ [here’s another important feature of capitalism, though this statement needlessly insults people who may choose, upon having considered various options, to live in rural areas].

[This is an extract from Breaking Free of Nehru]

The key lessons about free markets and wealth generation are summarised in BFN, thus:

Recapitulating, a free society generates wealth by the simple expedient of letting markets function without undue hindrance. It creates institutional frameworks to govern markets with a view primarily to ensure justice. India should seek to build market governance institutions of this nature; these institutions must remain fully accountable to us. However, even Western societies find it hard to manage regulators who often hijack policy and start enforcing things they were not asked to. The government and citizens, together, must strongly curb such tendencies.

Given space constraints I will not discuss how these institutions are to be created [DOF contains some more details on this issue], but we can learn much from the experience of the West and from their literature on economic reforms. While endorsing most of the standard literature of economics and economic reforms, I would like to suggest a few words of caution:

On the whole, it is relatively easy to build free markets. All we need to do is to get out of the way. Laissez faire!

END_OF_DOCUMENT_TOKEN_TO_BE_REPLACED

(Extract from Breaking Free of Nehru)