Although its process of registration is still underway, it is now only a matter of weeks before SBP gets registered as India's first classical liberal party.

A notice inviting objections was issued nearly a month ago: 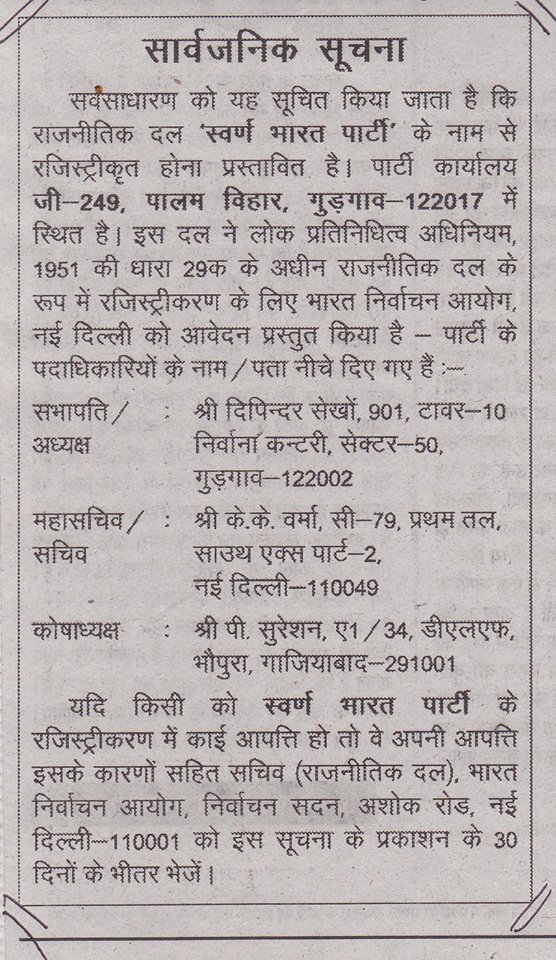 Within days, if no objection has been received SBP should have completed all formalities for registration.

SBP is intended to be an AGGREGATOR party – to bring together a vast number of good people who believe in liberty and good governance. It will also constantly accept new leaders and reshuffle its leadership team to accommodate other parties that may wish to (at some stage) merge into this NATIONAL LIBERAL PARTY.

This is now your opportunity to FIX INDIA'S PROBLEMS.

Your platform is now almost ready.

END_OF_DOCUMENT_TOKEN_TO_BE_REPLACED

Swarna Bharat Party created today. What is its purpose?

As you are aware, some of us have been mulling over the creation of a party that would take the Sone Ki Chidiya Total Reform Movement forward since it is very unlikely that major parties will implement the agenda for reform that it is preparing.

The idea was to create a Sone Ki Chidiya Party, but upon reflection and discussion, and after voting, it became clear that the name of the party should not be the same as that of the movement. I won't go into details but let's just say that it was a difficult decision: changing the name of a previosly conceptualised party at the last minute.

However, the alternative name that was proposed and finalised, is VERY SIMILAR to the Sone Ki Chidiya brand. Swarna Bharat represents an India that is not just shining but made of gold.

We were looking for a name that would reflect the GLORY that we want India to achieve. It is just not enough to talk about people's power or the common man. We must have that. But the PURPOSE of that power must be clear: to create a society with liberty and prosperity. Janata Party, Lok Satta Party, Aam Aadmi Party are all variants on the deeper democracy theme.

Sure. We all want deeper democracy. But it is the results of democracy that we care for in the end. Does democracy yield prosperity? Does it yield integrity in public life? If not then why does one care for democracy? What's so great about India's CORRUPT "democracy"?

In brief, the name Swarna Bharat is a benchmark. It is an aspiration that will never come to an end. No matter how much progress India makes in the future, there will still be something more to achieve.

Swarna Bharat is not a passive name that accepts what is found in India today. And it steers away from inane concepts such as "common man" or people's power. We've had such ideas for 65 years and all we see as a result of these democracy-centric ideas is a super-corrupt "democracy" and extreme poverty and illiteracy.

And so a resolution was made at a meeting in New Delhi to adopt the Swarna Bharat Party constitution (on SBP website) and to commence all steps to register this party with the Election Commission of India. That process has a window of 30 days, within which we must find 100 members with voter IDs.

One of the very surprising things discovered during this process is that a significant proportion of people in India haven't got their voter ID cards. Many people don't want to vote, or getting ID cards is too hard, or the address on their cards is outdated.

We need a good number of additional members to join SBP. To join you MUST have a valid voter ID. If you wish to join, please write to me at sabhlok@gmail.com. The process is very simple: you'll have to fill in a simple affidavit, get your voter ID attested, and send your papers along with Rs.100 lifetime membership fee to the Delhi office of the party.

PURPOSE OF THIS PARTY

This party is designed to be a PLATFORM. A vessel. A receptacle.

The party will try to convene a national convention (plenary session) in the next few months to determine whether the country wants to REALLY fight for its liberties or is full of petty egos and other confusions that lead only to victory for the corrupt.

I envisage such an event would have at least 1000 participants from all over India, with a clear challenge thrown at them: MERGE OR BE A LOSER FOR EVER!!!

Now, I will never ask anyone to merge unless the WHOLE merger has been worked out in advance. Piecemeal mergers are worse than no merger at all. They create further confusion. So it will have to be a TOTAL merger or none at all.

At the convention we could create a national executive of 75 people and state executives comprising many people in each state. EACH leader who merges will get a SIGNIFICANT role based on his/her demonstrated and/or potential strength. Membership to key positions will cost 50K to 1 lakh (according to the party constitution). Almost all positions will be open at that Convention (I've got one really superior intellectual in mind as Party President – but let's see if that materialises). We just need good people to come in and fill these roles. In fact there will be MORE positions than the sum total of all good groups in India today.

The convention should aim to run for at least four days. It should be held in a major city.

This party is NOT a normal party. Its sole purpose is to hammer ALL smallish efforts into one, on the basis of a common vision and agenda. Without such a platform, based on world-best practice, we are all wasting our time.

I invite all good groups in India, big and small, to write to me so we can set up an organising committee for this Convention.

Do India liberals and others have the capacity to come together and work on a single platform? Or do they want to ply their own journeys separately – journeys which are guaranteed to fail.

Do we want reform or are we keen to perenially remain on the fringe?

In the meanwhile we will continue to also run the Sone Ki Chidiya Total Reform movement in which I invite all good groups to join.  "Good" socialists may attend but with an open mind and willingness to learn.