This indologist seems to have arrived at very similar views to that of Sanjay Sonawani.

His other works include:Greater Magadha (2007; Indian reprint 2013), Buddhism in the Shadow of Brahmanism (2011; Indian reprint in preparation) and How the Brahmins Won (2016).

Worth finding time to read this scholar.

This is a placeholder post. Will add notes as I find time.

The spread of Sanskrit in Southeast Asia
by Johannes Bronkhorst http://t.co/RlI5csqhCe

Well Manusmriti includes land between seas and between Himalyas to Vindhyas as Aryavarta. As Johannes Bronkhorst says this shows that even Bengal was in aryan orbit by this time. Manusmriti is clearly pre Gupta.

Also, there is no definite proof for even the existence of historical Buddha/Siddhartha but these ppl are well aware of his dharma. Even if he had existed, acc to Johannes Bronkhorst, there was no Vedic influence in the region Buddhism sprouted & that makes Buddha indigenous.

END_OF_DOCUMENT_TOKEN_TO_BE_REPLACED

Parpola’s evidence along with latest DNA evidence is becoming persuasive.

Extract below from Parpola’s The Coming of The Ayrans to Iran and India:

1,51,5 With your wiles you blew away the wily ones, who, according to their own customs,
poured (their offering) “on the shoulder.”

You broke through the strongholds of Pipru, O you of manly mind; you helped Ṛjiśvan
through in the smashing of Dasyus.

With your foot you trampled down Arbuda, though he was great. Indeed, from long ago you
were born to smash Dasyus.

8 Distinguish between the Āryas and those who are Dasyus. Chastising those who follow no
commandment, make them subject to the man who provides ritual grass.

Become the potent inciter of the sacrificer. I take pleasure in all these (deeds) of yours at our
joint revelries.

1,103,3 He who by nature provides support, being trusted for his power, roved widely, splitting
apart the Dāsa strongholds.

As knowing one, O possessor of the mace, cast your missile at the Dasyu; strengthen Ārya
might and brilliance, O Indra.

2,12,4 By whom all these exploits have been done: who has put the Dāsa tribe below and hidden away,

who has taken the riches of the stranger, as a winning gambling champion does the wager— he, O peoples, is Indra.

10 Who has struck with his arrow those constantly creating for themselves great guilt, the unthinking ones;

who does not concede arrogance to the arrogant man; who is the smasher of the Dasyu— he, O peoples, is Indra.

11 Who in the fortieth autumn discovered Śambara dwelling in the mountains;

who smashed the serpent displaying its strength, the son of Dānu, (thereby) lying (dead)—he, O peoples, is Indra.

2,20, 6 The god famed as Indra by name, he the most wondrous, rose upright for Manu.

The able, independent one carried away the Dāsa Arśasāna’s very own head.

7 Smasher of Vṛtra, splitter of fortresses, Indra razed the Dāsa (fortresses) with their dark wombs.

He gave birth to the earth and the waters for Manu. In every way, he makes the sacrificer’s laud powerful.

4,16,10 Drive here to the home (of Uśanā Kāvya) with your Dasyu-smashing mind. In companionship with you, Kutsa will become eager.

Do you two, having the same form, sit down each in his own womb. She is trying to distinguish between you two—she is a woman who distinguishes the truth.

12 For Kutsa you laid low insatiable Śuṣṇa, who brings bad harvest, with his thousands, before the day’s first meal.

Immediately crush out the Dasyus with (the weapon) that is Kutsa, and then tear off the wheel of the Sun at the moment of encounter.

You scattered down the dark fifty thousand. You shredded their fortresses, like worn-out age a cloak—

5,34,6 Very energetic in the clash, affixing the wheel (to the chariot?), he is antagonistic to the non-presser, but strengthener of the presser.

Indra is the dominator of all, spreading fear; the Ārya leads the Dāsa as he wishes.

6,20,10 Might we win anew through your help, Indra. The Pūrus start up the praise with this (hymn) along with sacrifices.

When he split the seven autumnal strongholds, their shelter, he smote the Dāsa (clans), doing his best for Purukutsa.

6,26,5 You made that hymn (endowed) with might, Indra, so that you could tear out hundreds and thousands (of goods), o champion.

You struck the Dāsa Śambara down from the mountain and furthered Divodāsa with glittering help.

6,47,21 Day after day he drove off from their seat the other half, the black kindred all of the same appearance.

7,6,3 Down with those of no intelligence, those tying in knots, those of disdainful words: the Paṇis, not giving hospitality, not giving strength, not giving sacrifices.

Onward and onward Agni has pursued those Dasyus. The first has made the last to be without sacrifices.

7,19,2 Just you, O Indra, helped Kutsa, while seeking fame for yourself with your own body in the clash,

when for him you weakened the Dāsa Śuṣṇa bringing bad harvest, doing your best for Arjuna’s offspring.

4 You—whose mind is inclined towards men in their pursuit of the gods—along with men you smash many obstacles, you of the fallow bays;

5 Yours are these exploits, you with the mace in hand—that nine and ninety fortifications at once

along with the hundredth you worked to the end, in bringing them to rest [= collapse]. You smashed Vṛtra, and moreover Namuci you smashed.

8,70,10 You are the one who seeks the truth for us, Indra. You find no satisfaction in him who reviles you.

Gird yourself in between your thighs, O you of mighty manliness. Jab down the Dāsa with your blows.

11 The man who follows other commandments, who is no son of Manu, no sacrificer, no devotee of the gods—

him should your own comrade, the mountain, send tumbling down; the mountain (should send down) the Dasyu for easy smiting.

10,22,8 The Dasyu of non-deeds, of non-thought, the non-man whose commandments are other, is against us.

You smasher of non-allies, humble the weapon of this Dāsa.

10,138,3 The sun unhitched his chariot in the middle of heaven. The Ārya found a match for the Dāsa.

The firm fortifications of the crafty lord Pipru did Indra throw open, having acted together with Ṛjiśvan.

4 Defiant, he threw open the undefiable (fortifications); the unbridled one pulverized the ungodly treasure-houses.

Like the sun with the moon, he took for his own the goods found in the fortress. Being sung, he shattered his rivals with his flashing (weapon).

END_OF_DOCUMENT_TOKEN_TO_BE_REPLACED

Some recent notes on Dayanand Saraswati’s belligerent and bigoted Hinduism

For my record and reference – based on recent study. Of course, there are many other references to Dayanand on this blog over the years. 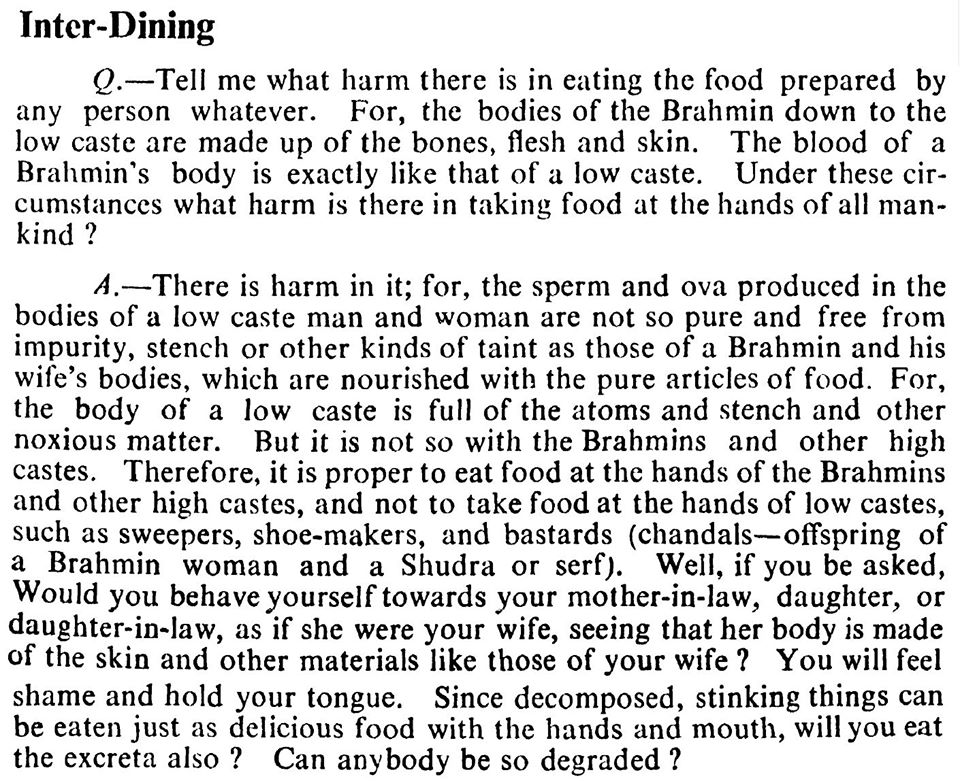 END_OF_DOCUMENT_TOKEN_TO_BE_REPLACED

My next TOI blog post: RSS is the greatest enemy of Hinduism 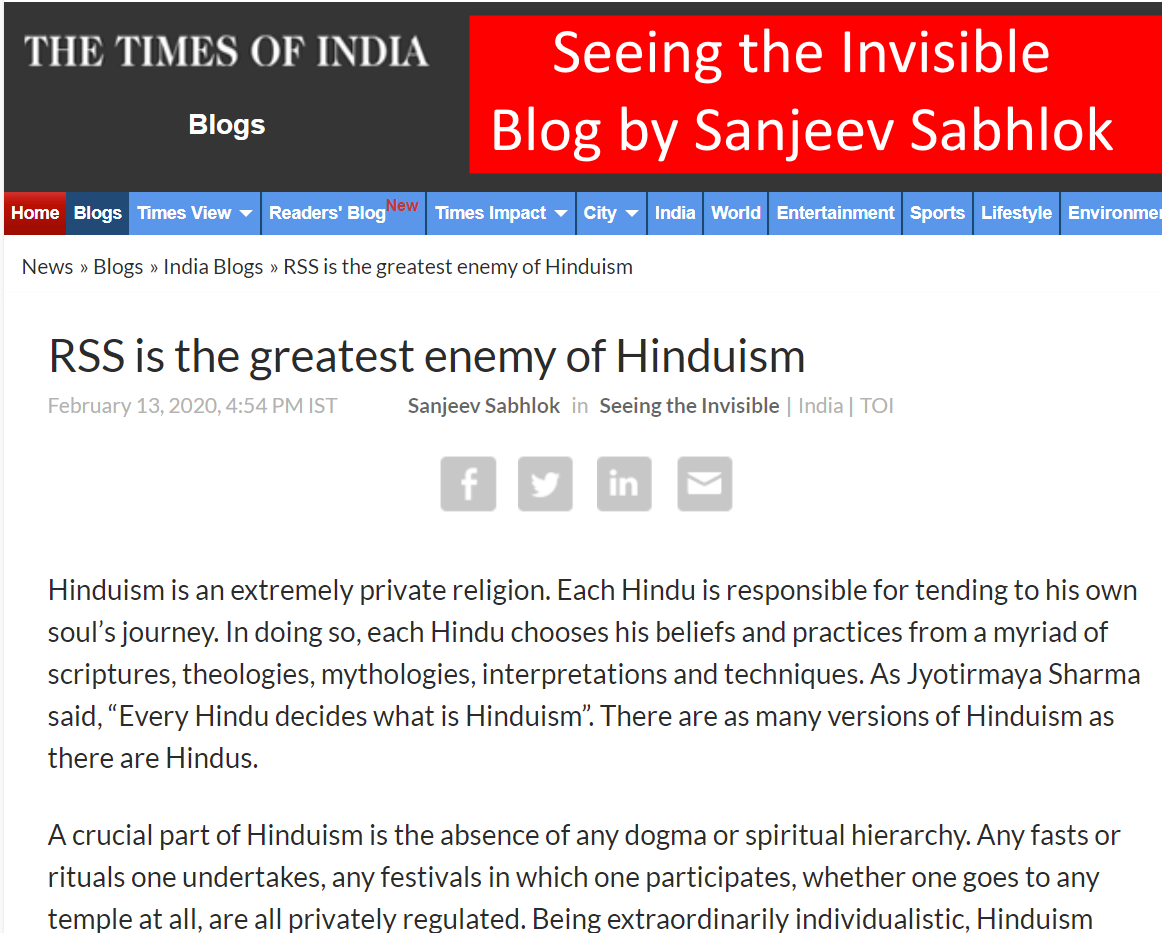