Vaccines are POSSIBLY a cause of the 6.7% decline in births in Sweden in the first half of 2022 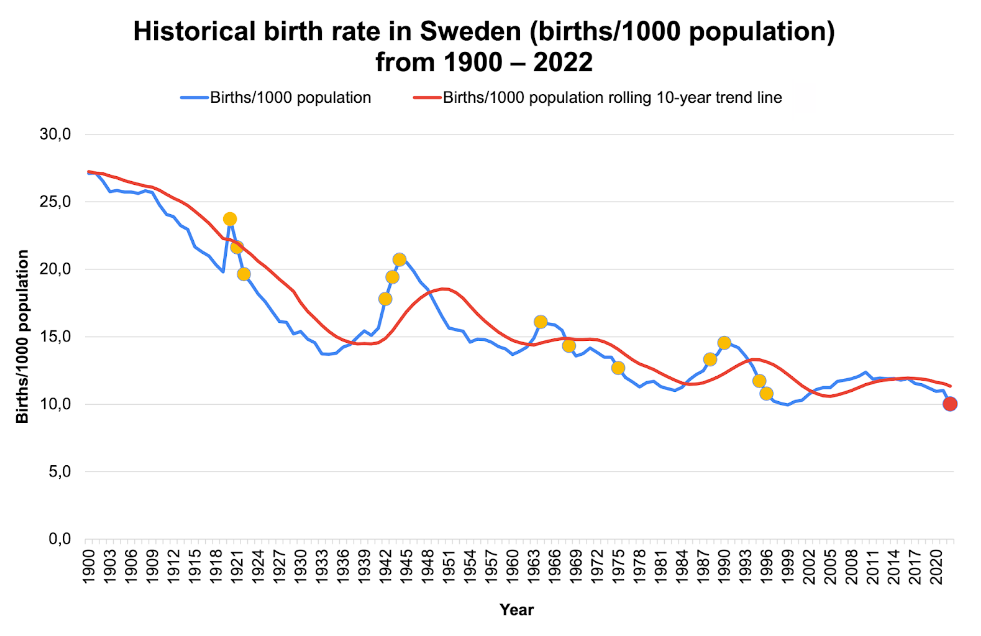 This chart confirms that birth rates have a LOT of natural variation. The cause of current decline in birth rates can be linked to vaccines ONLY by demonstrating that pregnant women had a lot of stillbirths. Simplistic correlations are not proof.
[TO READ: https://dailysceptic.org/2022/12/15/are-covid-vaccines-behind-the-drop-in-birth-rates-in-2022/
and https://twitter.com/boriquagato/status/1618248520892559360?t=CX4FElGw0PMtlL0xfgEMlQ&s=19

Sweden is a particularly important case for analysis both of lockdowns and covid vaccines, being the only control we have (since it had no lockdowns – I do not include voluntary social distancing measures by people as lockdowns).

As I have repeatedly shown, mortality data from Sweden rules out the possibility that people have died in large numbers from vaccines. Those who are making such claims about vaccine harms are conflating vaccine and lockdown harms.

However, there is a possibility that vaccines have harmed fetuses and reduced births. My preliminary analysis of Sweden’s data suggests that we need to keep a watch on this issue. I’ll return to it after maybe 6 months.

a) Lags in data collection?

Is it possible that the data for 2022 are under-reported in Sweden? That does not appear to be the case. Sweden’s birth reporting system seems to be quite good, since there is no change in the reported figure for 2020 even when we go back to the report for 2020 on archive.org.

b) What about the possibility of random variation in births in the two halves of the year?

In all three years, the bulk of the births occurred in the first half of the year, which significantly reduces the likelihood that births in the second half in 2022 in Sweden will “cover up” for the deficit in the first half. More likely, the trend we have seen in the first half will continue – but we’ll know for sure only after a few months.

(For Australia there seems to be a much simpler issue: the incompetence of the statistical system of Australia (which I’ve mentioned also in the Foster-Sabhlok CBA); see also this report in ABC) – but that does not seem to be an issue for Sweden.

Have young Swedish couples voluntarily chosen to reduce births in 2021 (leading up to the first half of 2022)?

The way population dynamics works, it is extremely hard to predict changes from year to year.

The chart below for Switzerland shows, however, that in some cases we do have some society-wide reasons for extreme changes.

The chart also shows that minor fluctuations (say, less than 5%) are relatively easy to explain as random variation/ noise, but not larger reductions (e.g. the reduction of 6.7% seen in Sweden).

So the change seen in the first half of 2022  in Sweden is unlikely to be the result purely of voluntary actions (i.e. random variation).

[The chart below, for Switzerland, is sourced from here]. 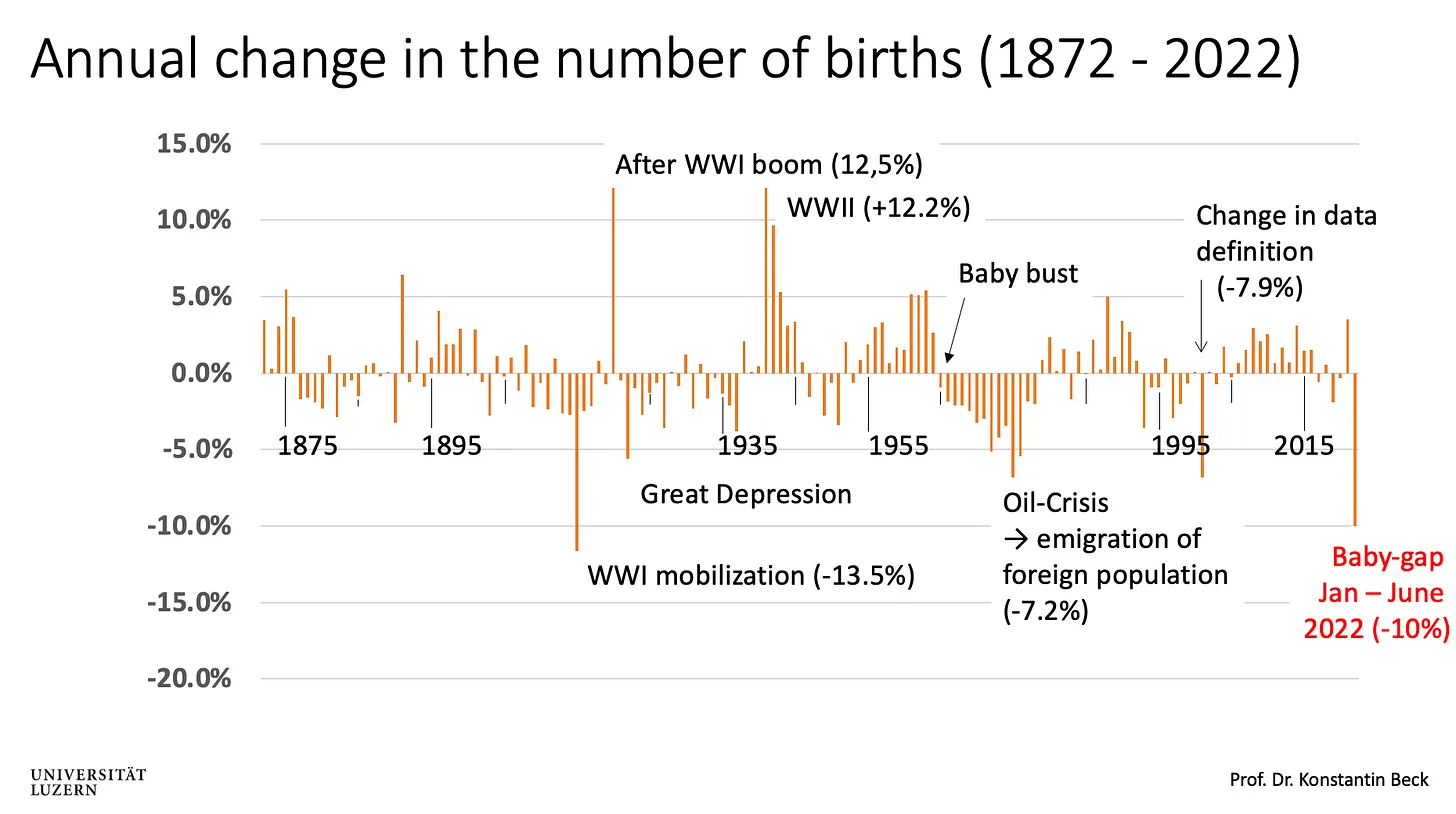 My initial analysis of births across the world during lockdowns (for the Foster-Sabhlok CBA) resulted in an unclear conclusion: Some arguments were for an increase in births [greater time together], others for a decrease in births [e.g. significant reduction in marriages]. Some observations were one way, others the other way. Overall, there’s been an increase in births in Australia in 2021 but it is hard to attribute this to lockdowns.

The BBC published a report on 14 October 2022 claiming that lockdowns reduced births – we know that China did experience a significant decline, but once again, I’m not convinced strongly either way about the net effect of lockdowns on births across the world.

For Sweden, however, the situation is much simpler. No lockdowns (only some voluntary social distancing and working from home), so lockdowns can be ruled out as the cause of reduced births in Sweden.

This leaves us with vaccines as a possible cause for Sweden.

We’d expect that if vaccines were killing fetuses, there would be reports about this matter. However, the current information I’ve gathered is unclear/incomplete.

See the following: Study Finds COVID-19 Vaccination During Pregnancy Does Not Increase Risk of Preterm Birth or Stillbirth

Also, this study (Fetal death after the introduction of COVID-19 mitigation measures in Sweden, Denmark and Norway: a registry-based study) is not of much help. It covers Sweden but notes that “We therefore had information on all registered pregnancies for Denmark and Norway, while we only had information on births for Sweden”, which is a shame. Further, its period of analysis ends in March 2021. All we can say is that the vaccines definitely did not impact the proportion of pregnancies ending in a miscarriage at least till March 2021 in Norway and Denmark.

So the signature of vaccines killing fetuses remains rather weak, even as there seems to be a rather steep decline in births in Sweden.

I remain open to the possibility that vaccines have caused some part of the decline in births in Sweden (and hence across the world). Note that Sweden’s case rules out lockdowns as a cause of decline in births (this applies worldwide).

Vaccines are therefore POSSIBLY a cause (not “the cause”, since there are significant long term trends at work) of a significant drop in births in Sweden in the first half of 2022. We will know more only when data for the rest of the year 2022 are published.

The problem is that variation of less than 5% is not something that is exceptional in births, so if the final numbers are in that range, we’ll be left with no particular conclusion either way.

We also need very strong evidence that the registered pregnancies/ births ratio has significant increased across the world after the vaccines, particularly in Sweden.

This is an extremely cogent thread re: excess mortality among children in Europe. During covid, fewer than normal children died because they were also protected from other disease. There’s now a rebound + also some potential vaccine deaths.