No, covid vaccines have NOT killed many people in Australia (or anywhere else in the world)

I’ve said this on many occasions, but here’s some stuff I sent out in an email communication with some excited and panicked people, a moment ago: 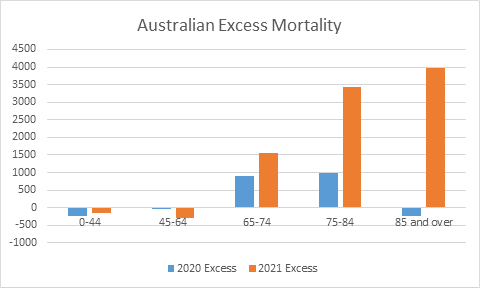 From the latest ABS all-cause mortality statistics, we have for Australia the following excess mortality by age cohorts:

In Australia, there were 1,366 excess deaths (relative to 2015-19 average) in 2020, when there was a lot of alarm and fear  to get people ready for the COVID injections.  In 2021, after mass injection, excess deaths increased by more than six-fold to 8,517.   What is worse is that the propaganda is to protect the vulnerable or elderly who had the first priority in getting the injections.  The result?   The numbers are raw data from the latest ABS release.  There was no pandemic in Australia in 2020, but the pandemic started by COVID injections in 2021.  The effect is persisting in 2022, with even greater death toll.  The average doses per Australian has already reached 2.23 doses.  The boosters (on top of two doses) have never been tested in clinical trials to be safe.  65% of Australians have already be third dosed.  Deaths continue to mount.

The claim is that this proves that vaccines are causing the excess deaths. Sadly, these people can’t read simple charts.

WHAT IS THE CHART SAYING?

We need precise ICDs of those who might die from vaccine. We have had a VAST increase in deaths from cancer/ diabetes/ dementia (all related to lockdowns) and a REDUCTION in deaths which could have been caused by vaccines. Age distribution is merely saying that those who died were from lockdowns. The vaccine affected would have been in 0-64. These groups have experienced VASTLY LOWER deaths in 2021. Nothing could be more conclusive than this. IN ADDITION TO MY OTHER ANALYSIS AT: https://t.me/sanjeevsabhlok/3762 and https://t.me/sanjeevsabhlok/3763.

Sorry but this is entirely and 100% wrong. There’s been a vast amount of UTTER NONSENSE produced by useless “researchers” who are panicked by vaccines. There is NO EVIDENCE in the excess deaths data of Sweden or Australia about any significant vaccine deaths. I’ve shown it again for Australia just a moment ago. I don’t care for projections and models, ONLY actual data. So should you.

This entry was posted in Uncategorized.