Have vaccines saved lives? Yes, billions of them.

I had assumed that everyone understood that vaccines are a crucial tooklit of public health and that they have saved vast numbers of lives. Looks I was wrong. My claim that vaccines have saved billions of lives was met with a lot of opposition. Some people shared charts from developed countries to “disprove” my claim.

Here I’ll summarise the logic behind my claim – those interested can research more.

CAUSES OF DECLINE IN CHILD MORTALITY
Even in the West, child mortality was around 500 out of 1000 till a few hundred years ago, and life expectancy was around 30 years. But due to the Enlightenment, things changed (see my book, Discovery of Freedom).

With the advent of the SCIENTIFIC METHOD, Western biological science has evolved dramatically over the past 400 years, and its innovations have gone into three key areas:

a) vaccinations (which came before any bacteria or virus was known)

The first of these two innovations came first which led to a significant drop in Western child mortality rates even before the 20th century. And yet, 165 per 1,000 in 1900 children died before age 1 in the USA  in 1900. 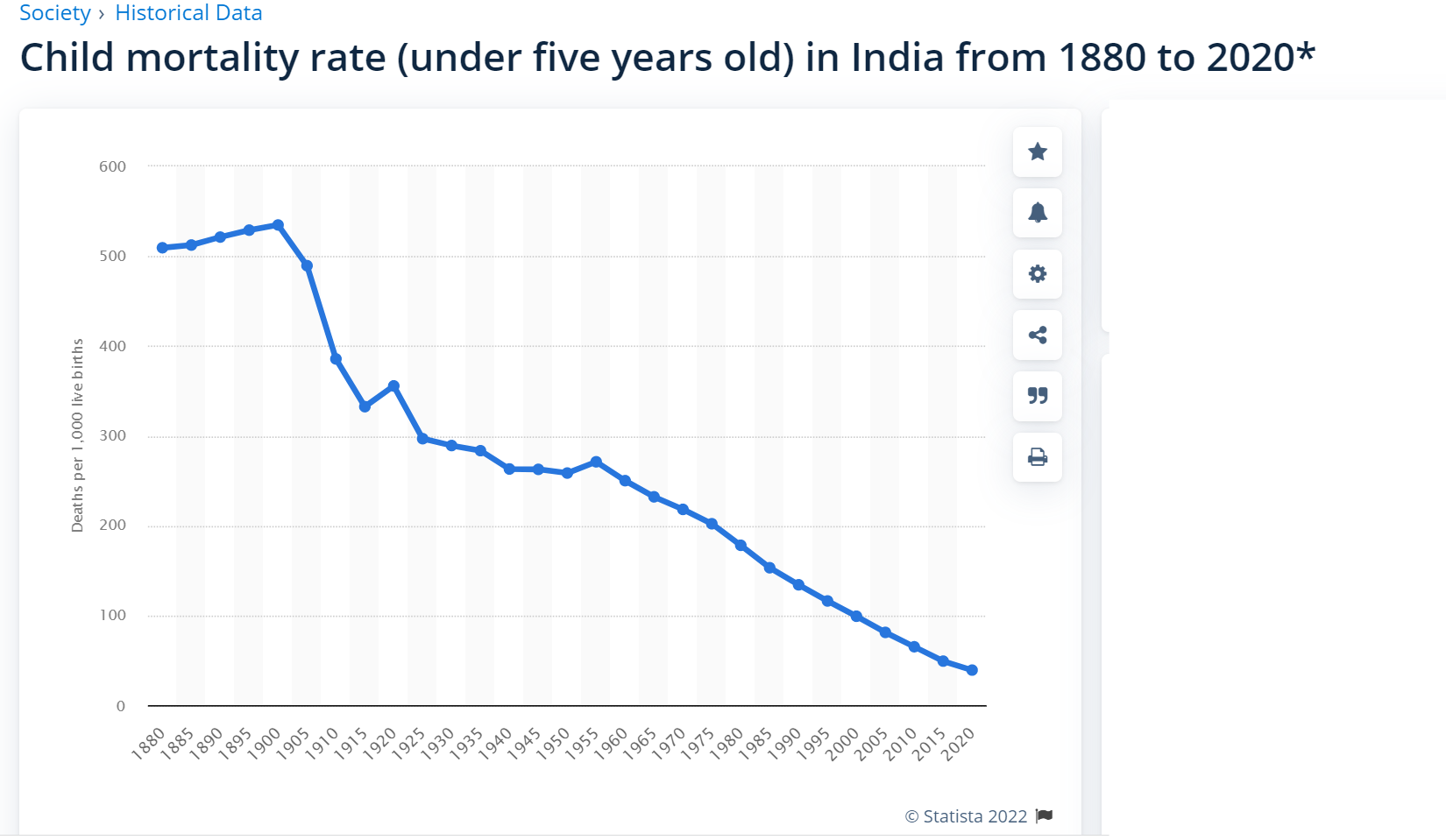 But the British government in India started public health efforts in earnest from around 1900 and education on public health as well as smallpox vaccines caused a steep decline in deaths of children from around that period. That meant that the average TFR (total fertility rate of 7) for the average woman was now starting to generate more than the desired number of children (in the past only 2 out of 7 survived into their parents’ old age).

It was hard for parents to re-adjust to this changing circumstance (takes 2-3 generations to do so), so ultra-large surviving families of 7+ children became very common in India among the middle classes by the 1920s and 1930s. Only since my father’s generation (and much later in the villages) have Indians re-adjusted their children downwards to 2-3.

By independence, India’s infant mortality rate was around 190 per 1000 (i.e. 2 out of 10 children were still dying before age 1). I have been alive for much of the period since then and I know how vaccines have placed a CRUCIAL role in bringing this rate down to the current 5 out of 1000. I have been an administrator in India and involved in the vaccine campaigns and programs that went (and still go) into interior villages to vaccinate millions of children. 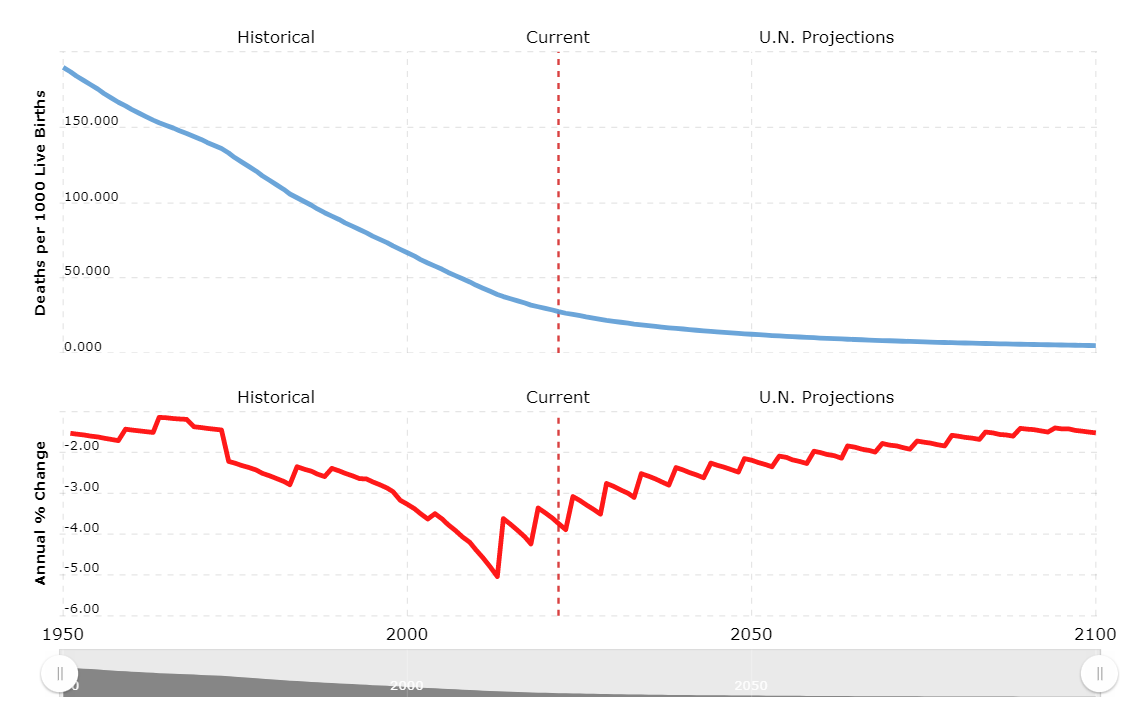 Yes, there were a few (rather corrupt and very shoddy) efforts made to ensure clean water for villagers. But clean water is a luxury that’s not yet available to all villages, even in cities like New Delhi. Till today there is virtually no sewerage in India. There are also almost no health facilities in remote villages: doctors rarely, if ever go there.  And the country is as filthy and dirty as ever before (probably more than ever in the cities which smell like garbage pits; and the rivers carry vast amounts of filth).

So while all the factors are involved in explaining India’s reduction in child mortality and increase in life expectancy, vaccines have played the most important role over the past 100 years or so in India.  Delivering vaccines is cheap: delivering water, sewerage and medicines is very costly.

India’s experience should be multiplied across the developing countries. Developed countries had only a tiny proportion of the world’s population in 1900. The total number of people who have lived during the last 100 years is in the range of 10-12 billion.  MANY of them, in the hundreds of millions if not in the billions, would never have lived without vaccines.

This is the broad assessment – detailed assessments will surely be there somewhere in the literature, but I can assure you that it is WRONG to extrapolate, globally, the impact of vaccines only on the basis of relatively recent data from developed countries.

The developed countries had a more prominent contribution from public health (water, sewerage) and modern medicine; vaccines have contributed most to developing countries.

WHAT ABOUT COVID VACCINES?

I have analysed the data and concluded that covid vaccines ALSO save lives – but VERY FEW, and their immunity wears out very quickly. That’s pretty much like flu vaccines – actually a bit worse.

I do not believe such vaccines (which also cause significant side effects) should be mandatory at all.

I wrote in my articles in 2020 in The Australian and in Times of India that covid vaccines may be considered by those over 75 and those with co-morbidities, etc. but that they must be ENTIRELY VOLUNTARY. No compulsion.

I have also called for a halt to the rollout of covid vaccines in Australia given their significant side effects.  And I have explained why I have taken covaxin covid vaccine in India that I might not have otherwise taken at this stage without compulsion in India and Australia.

No, lifespan in India has not reduced only because of nutrition. A vast proportion of children are still malnourished. 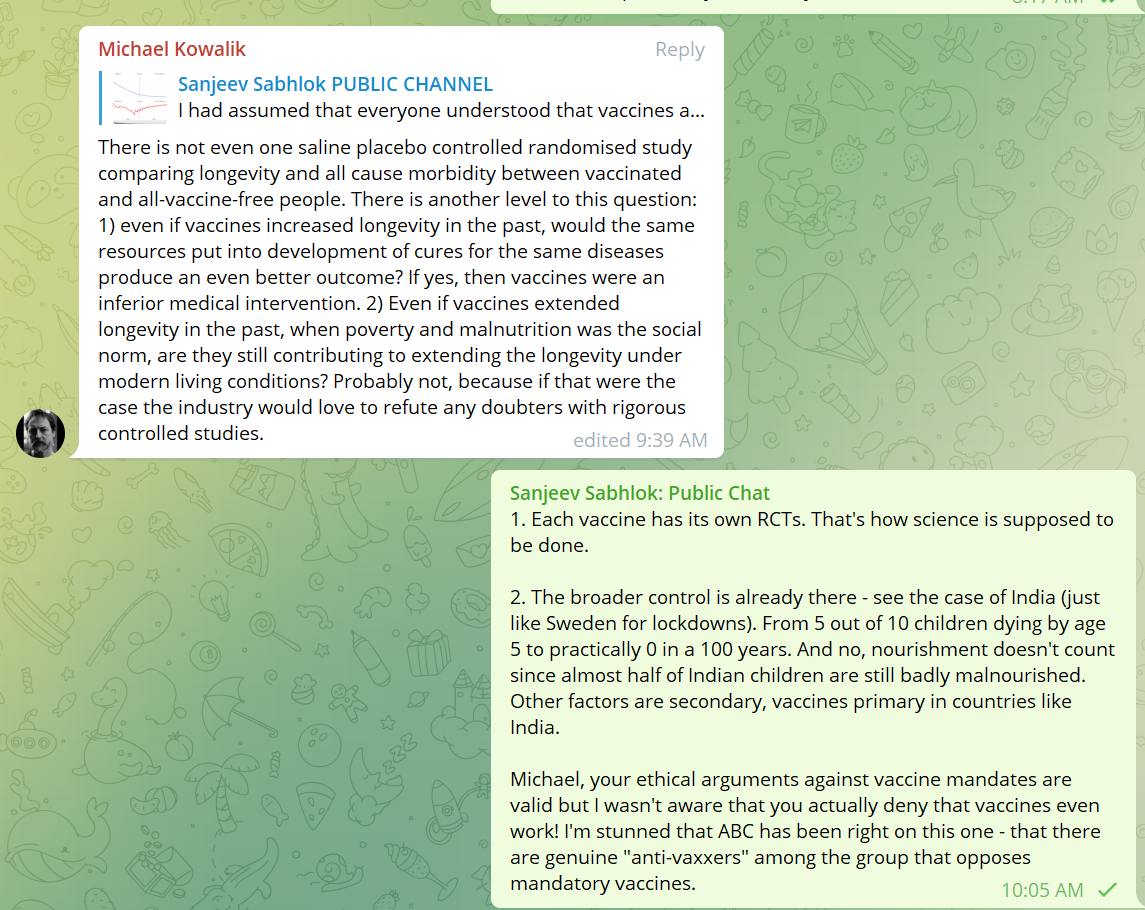 AND NO, IT IS NOT INDIA’S LOW MEDIAN AGE THAT EXPLAINS THIS:

« How Australians have responded to Djockovic: the Great Hysteria continues unabated.
Vandana Shiva’s involvement in Sri Lanka’s attempt to massacre its own people »
View more posts from this author

4 thoughts on “Have vaccines saved lives? Yes, billions of them.”