What about Israel? Does it show that vaccines don’t work? #1

“if you prioritize the most vulnerable people for vaccination — which is what you should do — then vaccinated people will be disproportionately drawn from the vulnerable population. That means more of them than you might otherwise expect will end up sick.”[Source]

People vaccinated in January had a 2.26 times greater risk for a breakthrough infection than those vaccinated in April. (Potential confounders include the fact that the very oldest Israelis, with the weakest immune systems, were vaccinated first.) [Source]

In real-life Israel, as of Aug. 15 — using Morris’s summary of official data — 301 fully vaccinated people had an illness severe enough to require hospitalization. They represented just 53 out of every million fully vaccinated Israelis. At the same time, 214 hospitalized people were not vaccinated. Those people made up a much bigger fraction of the smaller population of unvaccinated people: 164 out of every million. So an unvaccinated Israeli is about three times as likely to end up in the hospital as their vaccinated compatriot. [Source]

Ted Steele has co-authored this piece which considers many countries including Israel.

My analysis of Israel:

It is hard to conclude from the charts in Ted’s article that, on average, the vaccines have done anything meaningful. But this macro-approach is probably not the best suited to identify any marginal effect of vaccines, the uptake of which has been increasing over time even as total deaths have been declining.

Further, in the case of Israel these are the facts (of course, what is a covid case/death is badly doctored, but one hopes that all countries have equally falsified their data): 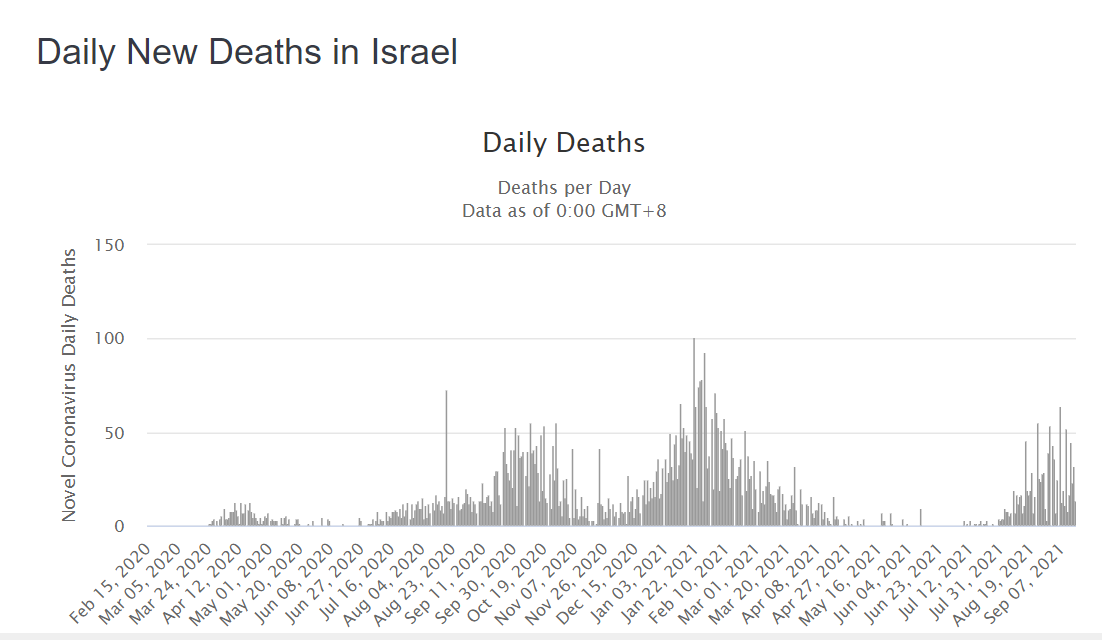 3. The chart for Israel in Ted’s paper suggests (although due to different Y axes, this deduction could be seriously flawed) that during March-July 2021 those with vaccines might have experienced a lower death rate than those without vaccines. 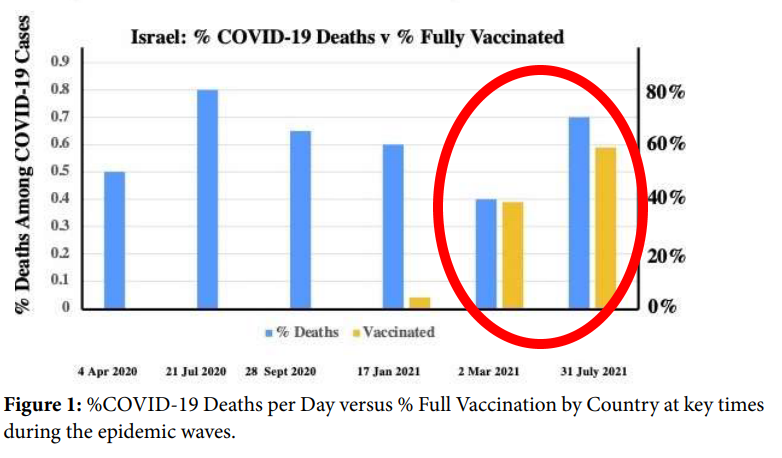 While these vaccines do not eliminate deaths, even if they help reduce deaths they can be considered to be a meaningful contribution to science.

What about “jab in the arm” theory?

According to this theory the present ‘jab in the arm’ vaccines cannot protect against infection (“on textbook first principles grounds, as they do not stimulate dimeric secretory IgA mucosal antibodies which are very protective”). Flu shots are a jab in the arm and I’ve taken these for many decades regularly – and flu is a respiratory virus. While flu shots are known not to be entirely effective, they do seem to have some positive effect at the margin. Therefore someone promoting this theory would need to show also why a coronavirus is so radically different to flu that its vaccines are fundamentally unviable.

ADE
I’m aware that ADE is a genuine problem with these vaccines but also note that mass-scale deaths among the elderly are not happening as they should if ADE was a major issue. In India most (if not all) of my elderly relatives have taken the vaccine (at least one dose) and none have been adversely impacted.

One thought on “What about Israel? Does it show that vaccines don’t work? #1”