One of the most plausible analyses of reality is undertaken by public choice theory.

I spoke yesterday with Geoffrey Brennan of ANU, who has been a public choice analyst and philosopher for many decades; one of the best in the world.

I asked him whether he had come across anything in economics that would explain the actions of the government in leaping into the lockdown abyss.

I was particularly interested in finding out why the officials of the Department of Treasury and Finance and in the Department of Premier and Cabinet in Victoria – two agencies deployed by the government to challenge public policy proposals received for Cabinet consideration – allowed the kind of policies implemented in March 2020. (I have elsewhere shown how DTF washed its hands off the pandemic policy and said that DHHS was solely responsible: I’ve never before seen such abrogation of responsibility by executives in the Treasury in my 15-year career).

While Geoff Brennan had not come across any specific article either on public choice theory that could explain the actions both of politicians and bureaucrats, he offered some extremely valuable insights. I’ve combined his thoughts with mine and summarise below what might have happened. (Some of this is already found in my book, The Great Hysteria and The Broken State).

POLITICS IS NECESSARILY DRIVEN MORE BY EMOTION THAN REASON

It is foundational principle of public choice theory that collective choice or politics is largely driven by emotion.

While each voter takes enormous care to select a car – even though cars are equally reliable these days – the voter is aware that his or her vote is of marginal significance in an election. Therefore, voters tends to remain rationally ignorant about the policies of political parties (Anthony Downs first provided this insight in his 1957 book, The Economics of Democracy). Voters therefore treat political contests more like sporting contests in which an attitude or perception matters more than the actual policies of the party. Politics is therefore vulnerable to emotional appeals and preferences. It is particularly vulnerable to panics.

THE SINGLE GOAL OF POLITICIANS: TO GET RE-ELECTED

The focus of politicians is purely one: to get re-elected. Nothing else matters to them. If they find that public opinion has shifted in favour of a particular position (no matter how irrational that position might be), they are necessarily driven to support it. That might seem to be irrational on the surface, but is rational and in their self-interest.

This becomes particularly important during hysterias. When people have become hyper-emotional it becomes impossible for a politician to remain balanced and reasonable.

The situation in March 2020 resembled what happened in the USA after 9/11. “Something had to be done”.

Mass hysteria followed the 9/11 attacks in the USA and continued for many years. For at least five years after the incident, more than half the people surveyed in the USA remained convinced that a further attack of the sort that took place on 9/11 was imminent.  The pressure on politicians to do “something: after 9/11 was so severe that any voice of reason at the White House would necessarily have been drowned out.

It was this public pressure that not only led to the attack on Afghanistan but to the subsequent attack on Iraq. In fact, throughout history, governments are known to undertake the most extreme actions when people become emotional.

Even if senior bureaucrats in the Victorian Treasury had actually provided frank and fearless advice (which I know they did not), politicians would not have listened.

A key lesson from history is that no politician or bureaucrat is ever penalised for taking excessive measures. Instead, they can be penalised for not taking strong measures. In March 2020, politicians would have been blamed by the people if something terrible had indeed happened.

And so, given the uncertainty and the demand for action from panicked people, politicians choose to do something drastic, rather than follow the official pandemic plans. Actions in the existing pandemic plans were unlikely to be perceived by the people as being significant preventative measures. There was an arms race on: who would invent the most extreme measures. Dan Andrews came up as the winner with the curfews. And most people were happier with lockdowns and curfews then they would have been without them. Andrews became their hero!

The “no regrets option” of extreme measures that people actually were happy with, was cheaper for politicians in terms of energy and effort than trying to explain the more voluntary measures of the pandemic plans. (Only a person of the calibre of Anders Tegnell can do that.)

Further, politicians have a natural tendency to deflect responsibility. They needed to make the pandemic policy somebody else’s problem. In the case of Australia they chose to make the pandemic a problem of public health “experts”.  We heard a lot about the politicians “following the science” and public health experts. They were effectively passing the buck so they could not be blamed if something went wrong. The one hand they were seen as doing something, and on they other, they made the “experts” the fall guys. If something went wrong, the experts could be blamed.

WHY THE EXPERTS CHOSE TO DENY THEIR PREVIOUS RECOMMENDATIONS

Public choice theory also explains why public health “experts” did what they did. They had been given, by the politicians, the onerous responsibility of saving lives. The politicians depended on them to do “something”. Therefore, even though many experts had earlier recommended mild measures (which are found in the pandemic plans) they suddenly became very aggressive. They were in the limelight and could not afford to “fail”.

Another reason for their extremism is that they suddenly found themselves in a position of extraordinary power, never before experienced in human history by any public health experts. They were given the job of minimising infections and they were given extreme power by the politicians. That was a recipe for total disaster. Power corrupts and absolute power corrupts absolutely.

These incentives mean that we soon had a self-reinforcing cycle. The panic in the community led politicians to respond with extreme actions so they would be seen to be doing something. In that process, to evade responsibility, they gave powers to health “experts” who, in turn, found themselves gravitating towards extreme measures to save their own skin. All eyes were watching them on a daily basis and they had to say something about stopping the infections. It was just a short distance under such circumstances for the experts to move from the well-known science (that they had once advocated and published) to the extreme actions that they then undertook. 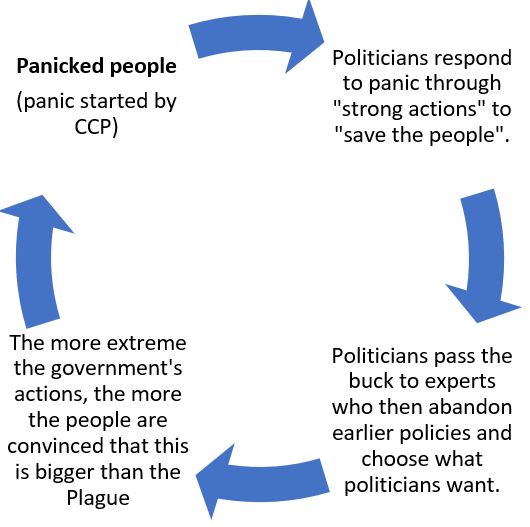 Now they are so badly locked into their positions that there is virtually no possible way to break this cycle.

OPTIONS TO FIX THIS MESS FOR THE FUTURE

I explained to Geoff Brennan three options that I have been considering in order to prevent such extreme policies in the future.

A bit of background on this third issue. The idea of a modern permanent civil service was created by East India Company and was then adopted by England which created its own civil service. That model was ten replicated in the colonies including in Australia. Australia later moved to contractual civil servants in the 1990s because of the influence of new public management.

Now, at one time I had thought that political appointments of senior officials is a good idea. I’m no longer confident that it is a good thing.

The failure of the Secretary of my former Department (Treasury) to be a diligent public servant has been so stark and problematic (and he continues in his job, unaccountable in any way), we need to redesign the entire system of bureaucracy. It is atrocious for people like the Secretary of the Treasury who earn over $700,000 a year to get away by not providing the most basic honest advice about the magnitude of the pandemic or the complete set of impacts on society of the pandemic. This amounts to, in my view, criminal negligence of duty.

The senior executives of the Treasury have been driven by greed to keep their mouth shut just because the politicians want crazy policies. These officials have kept their jobs and fat cat salary packages by not providing honest advice.

I am inclined to recommend a system in which both the politicians and a public service commission play a key role in senior appointments. Further, the appointments would not be possible to terminate at the whim of any politician but would require an independent body to be involved. This would make the new system a hybrid between a permanent civil service and a contractual one.

Anyway, these are just my current thoughts. I look forward to opinions and insights from others who may have thought about such matters.

This entry was posted in Current Affairs, Public policy.