A possible way forward to douse the covid hysteria

Extract from an email I sent to a few people a moment ago. Sharing:

Hi all, over the past month it has been great to interact personally with many of those who’re already “converted”. But the WA election result has made it clear that the voter continues to be a state of deep hysteria and panic and is seeking the comfort of the incumbent political parties to “survive this biggest calamity since mankind was invented”.

Over the past 6 months I’ve had conversations with at least 20 such hysterical people and it is clear they have a massive wall around their head (like around a nuclear power station) to block any ray of light from penetrating.

I’ve realised that it is not good enough to talk only to the converted – that will get us 4% of the vote (but that, too will inevitably splinter among 10-20 small parties and independents). Us, the “converted”, have a critical role to play as catalysts but we must start reaching out to the mainstream to break this brick wall.

This weekend I will make a renewed effort to convert the mainstream. The main tool for my experiments this weekend will be this chart (attached).

I will try to find out whether their frozen brain can be kickstarted by showing them this chart. I know that the Indians at the Point Cook gathering (that I’ll be attending) are highly qualified professionals. I hope that if they can be persuaded to look hard enough at this chart their brain will come back to life again.

I will ask – pretending to be a fool –

“Hey guys, I was hearing all of last year our governments claim that this is bigger than the Spanish flu. Then I looked at this chart which shows that all the models went crazily wrong in Sweden.

“The models said Sweden will have massive deaths without lockdowns (orange) but they actually had deaths lower than the 10 year average.

“I must be stupid (I only have a bachelors honours degree in Mathematics and a PhD in economics) but can you show me where is the Spanish flu?”

Btw, if you find (or know of) any better method to kickstart the frozen brain of 90% of Australians, let me know (at sabhlok@gmail.com) – we should share notes and learn from each other.

For those interested, the underlying source data for this chart (prepared by the brilliant Nick Huद्son of South Africa’s PANDA institute) is at: https://teamaustralia21.org/data-and-explanation-for-the-sweden-chart-from-panda/ 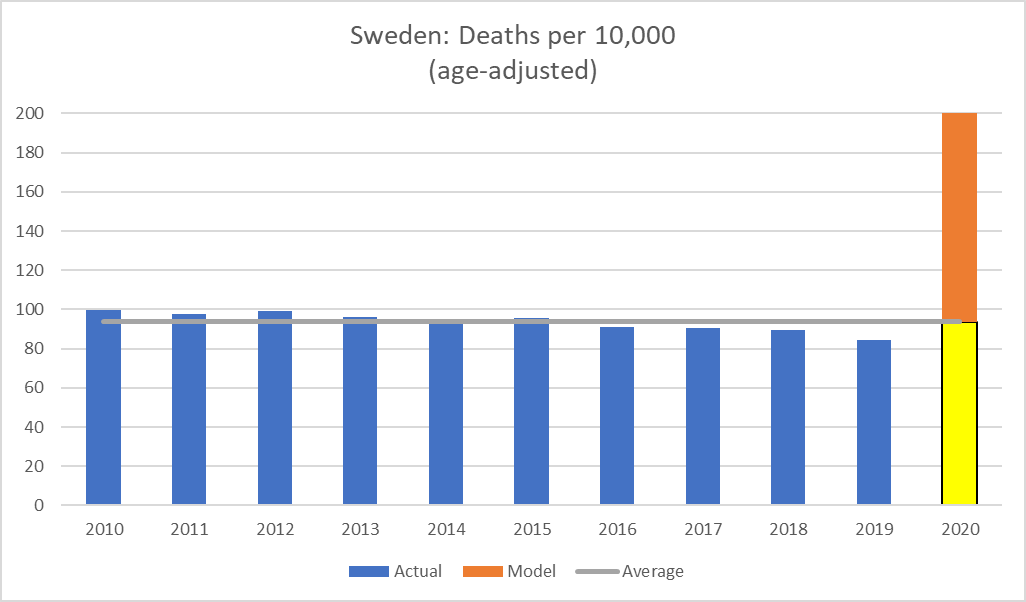 The proportion of people changed/ contacted will be helpful in assessing the viability of the political option.