A summary of Anders Tegnell’s views regarding lockdowns – an important, short video

I've spent over an hour to extract this relatively short video from five other videos – to summarise Anders Tegnell's view regarding the lockdowns.

He has spoken about many crucially important points over the year but my ICC complaint goes much further.https://t.co/7UZrDdLvPA

END_OF_DOCUMENT_TOKEN_TO_BE_REPLACED

Also see my article:  The covid vaccine is good but the people must decide

Official information provided by the UK

FIRST, THAT THE VIRUS HAS BARELY KILLED ANY ADDITIONAL PEOPLE IN SWEDEN

1/ Sweden's official death data as at 11 December 2020 are now available. I've updated my analysis to 96,200 annual deaths, around 3000 more than the trend based on population growth and previous years.

SECOND, THAT THE VACCINE MIGHT BE HELPFUL FOR THOSE OVER 75, BEING UNNECESSARY FOR MOST OF THE REST

THOSE OVER 75 CAN BENEFIT FROM THE PFIZER VACCINE

Since around 80 per cent of covid deaths in Sweden have occurred in those over 75, this age group in Australia can benefit from the Pfizer vaccine, even though only 4.3 per cent of participants in the study were from this group.

Adding this tweet to show why I'm comfortable with those over 75 choosing to take this vaccine.

When the elderly and frail die after receiving the COVID vaccine — Jon Rappoporthttps://t.co/ZOGSLppU7I pic.twitter.com/VDsQdyDenY

FEWER PEOPLE BELOW 64 HAVE DIED IN SWEDEN THIS YEAR THAN IN THE AVERAGE YEAR – THIS MEANS PEOPLE BELOW 75 MOSTLY DON’T NEED THE VACCINE.

THE SMOKING GUN IS NOW CLEAR ENOUGH: Look for excess deaths in ages below 64 and compare with Sweden. Sweden's had FEWER deaths among those <64.

A researcher thinks that those over 60 might also benefit although data that I’ve provided above doesn’t support such a view:

Thoughtful email from a researcher who has been part of #SARS-Cov-2 vaccine trials – he thinks 60 is a decent cutoff age to encourage people to get the vaccine, and compares the side effects to the shingles vaccine (which of course is not mandatory or particularly widely used). pic.twitter.com/LtGxlOlF0q

I don't really care for man-made stats like IFR whose denominator is iffy.

I'm looking purely at the Grim Reaper's report: 80% or more of covid deaths in Sweden were of people older than 75. That's a good cut-off from the risk perspective.https://t.co/Zco6g8aVx7

"Target vaccines to the most vulnerable, and don’t give them to people who have already been infected." pic.twitter.com/N6E4xs1zLB

That's exactly what I said in my 30 December article in The Australian.https://t.co/woVUFxLCJc https://t.co/DSv3NFAla8

.Children are PARTICULARLY immune to SARS-CoV2.

They must NOT be vaccinated.https://t.co/GtaL5GeOQe

This is odd, because the vast majority are at less risk from this virus than from flu.
Forcing vaccination on that majority is illegal & unnecessary for the health of anyone. https://t.co/NMrpjRnGoQ

THIRD, THOSE WHO HAVE HAD THE DISEASE DO NOT NEED THE VACCINE

Those who’ve had the disease have the best possible immunity. They don’t need it at all.

Basically any healthy person below 75 doesn't need it – their natural immunity will be sufficient.

I'll add a point about getting antibody + T-cells tested if one is over 75. I don't know whether doing so is easy or hard, just that those who've had covid don't need the vaccine.

A summary of my current view on the Pfizer vaccine.

Moreover, the vaccine doesn’t increase immunity for those who’ve already had the virus:

FOURTH, THAT THE GOVERNMENT HAS PROVIDED INDEMNITY TO COMPANIES FROM ANY LIABILITY

That's a really good point – it ought to form part of the information that is provided to the people.

Quite a mess – a vaccine for something that's barely killed many additional people; and with no liability for any potential harm.

FIFTH, THAT THERE ARE SOME IDENTIFIED SIDE EFFECTS BUT THESE ARE NOT VERY SERIOUS

There are two other pieces of info, potentially not so reliable, that also need to be addressed:
a) Open Letter to the Swedish Prime Minister and Swedish Public Health Director by Dr. Sanna Ehdin, 23 December 2020

b) Claims by Dr David Martin made in this video at 1 hour 42 minutes.

This chart shows that the side effects are relatively minor and disappear soon enough. But that they are relatively greater for the younger people – who don't need it anyway.

Let people be given all info and decide for themselves. https://t.co/4AQldlBaLQ

NOTE: Some people think these are excessive: French Expert Shocked By Number Of Adverse Reactions To COVID-19 Vaccine.

There are apparently issues with polyethylene glycol (PEG) that is found in the vaccines. Testing for allergy to PEG can reduce adverse reactions (Source).

No chance this is a safe vaccine

Hospital worker with no prior allergies in intensive care with severe reaction after Pfizer Covid vaccine – Metro https://t.co/pXfuwVruwT

LOL, yup, verified! She took the vacc and 20 minutes later she passes out! I expect the hospitals will soon be full from people taking the vax which will be called the "3rd wave" and then they impose martial law and mandatory vax pic.twitter.com/jmTJSxG3wx

SIXTH, THERE COULD BE LONG TERM HARMS BUT THESE ARE NOT YET KNOWN

WHAT ABOUT LONG TERM VACCINE HARMS?
– It is never possible to prove anything to be perfectly safe
– It is all about costs and benefits and trade-offs
– For those >75 (others don't need it), long-term is not very long
– Let people be provided all information and let them decide pic.twitter.com/EAFVSOYhUw

It is unclear why any effect will take 5 years to start. That's not how biology works. That would be similar to the fears of GM crop opponents that harms will start in 20 years.

Things will either go bad quickly or all will be fine.

Snopes, who claims to do fact checking, writes:

"No, mRNA COVID vaccines do not alter your DNA".

Snopes did not even begin to check the science facts.

SEVENTH, THERE ARE SOME REASONS TO SUGGEST A FLU VACCINE MIGHT INCREASE RISK OF COVID

Have you considered the cyclocline effect attributed to the flu vax? 2019 Military Study showed 36% increased risk of aquiring a Corona Virus after getting the flu vax. Many elderly and infirm are Vaxxed.

“BUT WE NEED TO PROTECT THE COMMUNITY”

That can be done by simply letting the virus "rip" – FEWER people <64 have died in Sweden this year than in the average year. No need for a vaccine. The virus is free.

All that's needed is to protect the elderly.

END_OF_DOCUMENT_TOKEN_TO_BE_REPLACED

On 10 October 2020 I had FOI’d some of my emails to senior management in DTF in which I had outlined an age-based risk management approach for the covid pandemic.

The FOI request has now been fulfilled and I can now publish the emails I have received. The emails confirm that I had strongly objected to any possibility of lockdowns and had recommended an age-based risk management approach (about which I published an article on 6 March 2020 in Times of India) – which I shared within the department among interested persons.

I may add that although the FOI process doesn’t disclose it, I had copied one of these emails to the head of the division. 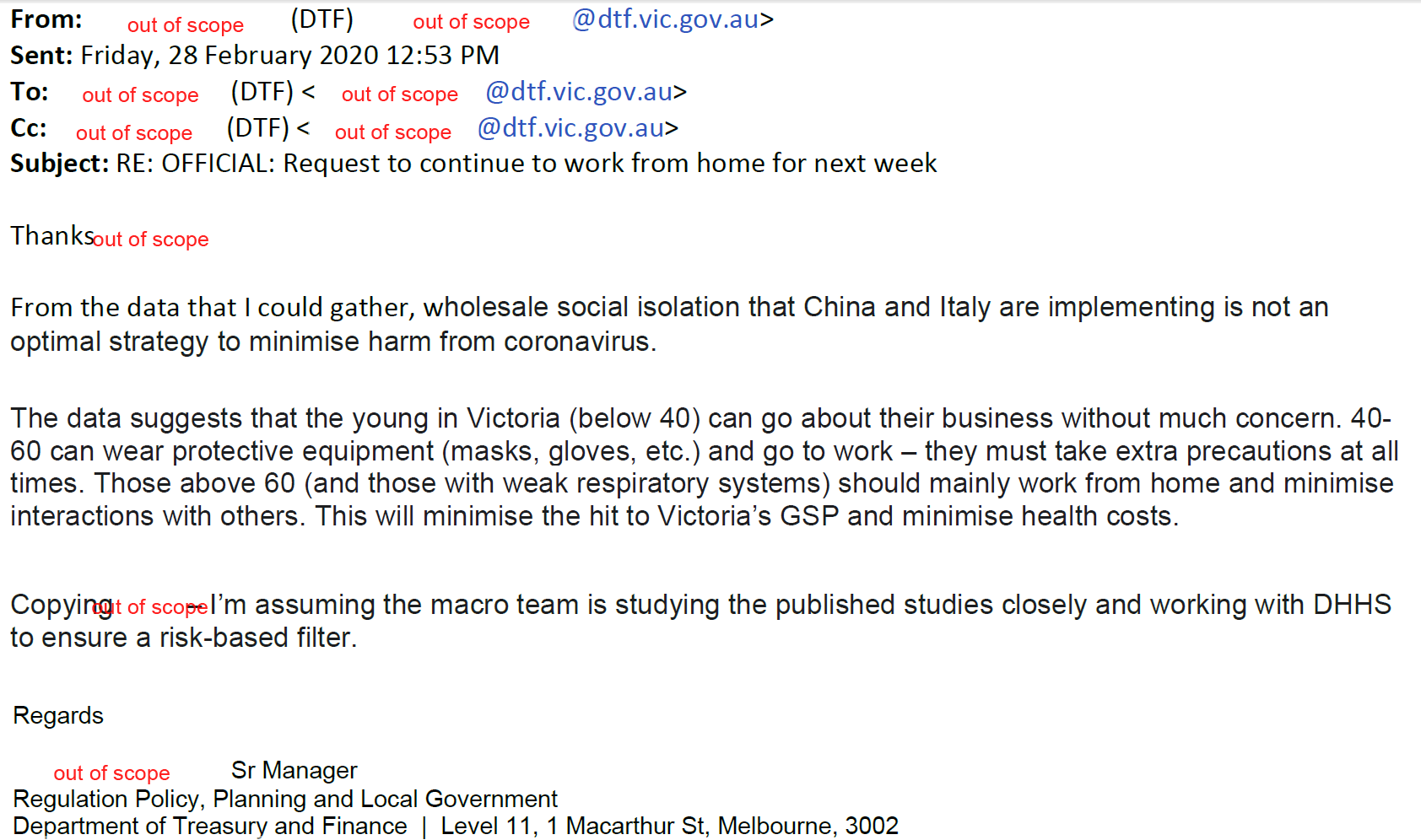 People and Culture refused to consider an age-based risk approach & were reluctant to let me work from home when it was warranted by the data.

A few weeks later they shut down the Treasury entirely – it remains closed to date. That is against my advice as well.

END_OF_DOCUMENT_TOKEN_TO_BE_REPLACED

My comments as a panelist at the Leadership Dialogue 2020

Sharing these two tweets which provide relevant links to fuller videos. I want to mention that Albert Dadon – who connected with me after my resignation and Fin Review article – is an extremely talented and intelligent person. It was a pleasure to have him as chair of these two panels.

I've extracted the most important 2 minutes from my opening remarks at today's panel discussion.

THIS IS MY MESSAGE TO AUSTRALIA AND THE WORLD.

A 2 minute extract from my opening remarks at last night's panel.

WE MUST OPEN UP VICTORIA AND AUSTRALIA FULLY – RIGHT NOW!

And I don’t know if I shared this – from late November:

A 2-minute summary of my Informer interview. @DanielAndrewsMP is LYING THROUGH HIS TEETH AND TAKING VICTORIANS FOR A BIG RIDE.

Share this snippet widely so Victorians can wake up.