I’ll continue studying the madness we are seeing around us (and also learn something useful on the way, re: PCR tests and all that), but this matter – which I’ve elaborated in my ICC complaint, needs to put down as a clear marker: that THERE IS NO PANDEMIC.

Data suggests that Sweden will have ~2,400 extra deaths this year compared with 2018.

A short video in which I explain the TOI article and some other updates:

Thanks to two readers for pointing out why Statista's data is not valid – I've deleted the previous tweet.

Revised analysis below. We now "see" a bit of the covid effect (around 2400 additional deaths) but still a very small: a "bad flu" year, definitely *NOT* A PANDEMIC. pic.twitter.com/yBXSBk7itV

Statista had not corrected for under-reported deaths in the few days days before 13 November.

A COMMENT MADE ON FACEBOOK IS RELEVANT:
“Also 2019 was relatively “low”. Ivor Cummins draws attention to several European countries where a milder than normal flu season last year has been followed by “more” deaths this year, compared to countries where a normal/bad season was experienced last year (fewer susceptible people)”

ANOTHER RELEVANT COMMENT:
“the 2 year average is on track for 90,583 and their population has grown 7.8% in the last 10 years – so the overall death rate down by a massive amount.” 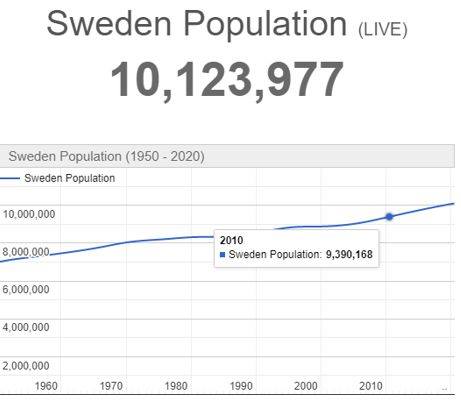 Furthermore, 2017/2018 was the desdliest flu season in 30 years. Great baseline for comparison 🤦‍♂️

Assuming your prediction is correct at 92,400, adjust for population growth and the death toll is less than previous years.

Canada is similar. See my tweet below from StasCan data.

Up until at least Sep 5th, 2020, There is no pandemic in Canada either. https://t.co/ysdObRebYf

Regardless of whether PCR tests are good or bad, this basic fact is absolutely clear.

I’ve done simple calculations to project Sweden’s final death toll this at appx. 90,600. That’s statistically indistinguishable from the average of the past 10 years and lower than for 2016, 2017 and 2018, so this virus is no worse than the ordinary flu.

ALSO SEE A LOT OF DATA HERE:  Historical data on Sweden’s death rates shows that COVID IS BARELY WORSE THAN THE FLU

ALSO, why are data from other countries irrelevant?

This is not the first time that epidemiologists have swindled the world. They have made it a habit of doing so. This time has been the worst, that’s all.

« Indian students who’ve paid millions in Australia are being tortured en-masse by keeping families and children separated
PCR testing – how many cycles are used in Australia? »
View more posts from this author