I’ve just discovered a vital piece of evidence of CRIMINAL INTENTION: that Daniel Andrews has been paying TAXPAYER MONEY to a company that SPECIALISES IN MANIPULATING PUBLIC OPINION.
A company more evil can barely be imagined. Its website says it all.

The Orwellian slogans that I’ve been commenting about for months are not a myth. HE ACTUALLY PAYS OUR MONEY TO GET ADVICE ON HOW TO MANIPUTATE US!!!! AND HE REFUSES TO RELEASE THE ADVICE HE HAS RECEIVED. PURE CRIMINALITY. A ROYAL COMMISSION WILL NEED TO EXTRACT IT OUT OF HIM. 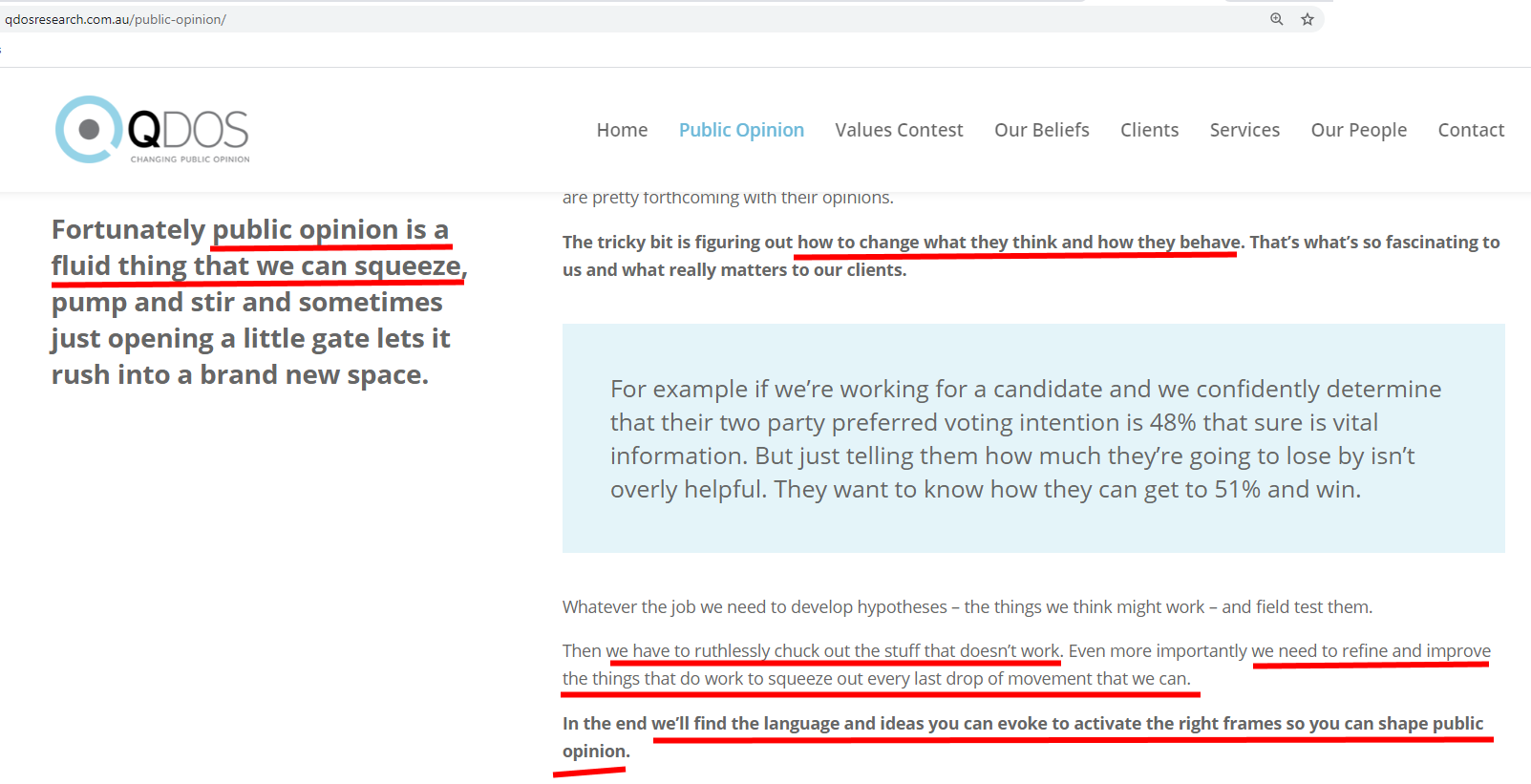 A Labor strategist who boasts that “public opinion is a fluid thing that we can squeeze, pump and stir” has been paid almost $2m by Daniel Andrews’ own department to run a secretive project to monitor the views of Victorians.

Despite Victorians bankrolling the confidential activity charting public sentiment and ­reaction to policies, the research will remain under wraps, with the Department of Premier and Cabinet refusing to release it.

In December last year, QDOS Research was handed a $1.1m contract, without a competitive tender process. The deal expires in October 2022, just days before the government enters caretaker mode ahead of the November state election.

QDOS, owned and operated by veteran Labor pollster and strategist John Armitage, promotes itself on its website as a Labor strategy firm, trading on its ability to shape public opinion, change public behaviour, win elections and develop “persuasive” language for clients.

In a section headlined QDOS Values, the firm’s website states: “Fortunately public opinion is a fluid thing that we can squeeze, pump and stir, and sometimes just opening a little gate lets it rush into a brand new space.

Mr Andrews is keeping the ­research, advice and reports compiled by QDOS secret from Victorians.

Mr Armitage, 51, did not ­respond to questions via phone messages, text and email.

Labor figures said it was possible QDOS had been involved in helping craft Mr Andrews’ public messaging during the corona­virus pandemic.

They believe one of the key roles QDOS has performed for Mr Andrews over the past four years has been helping him craft his communications with the public. The QDOS website states: “We develop communications strategy to help you run campaigns and win hearts and minds.”

Victorian Liberal Upper House leader David Davis has called on the government to ­release all QDOS research and reports provided to the DPC. “This specialist polling advice should be made available to the parliament and community that is paying for it,” he said.

Mr Davis claimed Mr Armitage would have been working on the government’s coronavirus ­response.

“Andrews’ pollsters are working overtime during COVID-19 — one of the few growth industries — to feed him the lines for his daily press conferences and distract from the government’s failings, including the deaths of 800 people and the massive ­destruction of businesses and jobs,” he said.

QDOS admits to using a “ruthless” approach to its ­research.

“Whatever the job we need to develop hypotheses — the things we think might work — and field test them. Then we have to ruthlessly chuck out the stuff that doesn’t work.

“Even more importantly, we need to refine and improve the things that do work to squeeze out every last drop of movement that we can. In the end we’ll find the language and ideas you can evoke to activate the right frames so you can shape public opinion.”

“The other side may well have some compelling values in their arsenal and you’ll be in big trouble if you battle within their frames,” it says. “Thankfully, the other side of that coin is that if they’re ­battling on your values you’ve ­already won.”

« OPEN LETTER BY Alexander Cooney, Senior Constable, NSW against the Police State across Australia
Complaint by Danielle Burnie to the TGA of Australia re PCR tests »
View more posts from this author