The 2006 email that changed India (or, rather, will change India in the coming years)

In 2005 I had completely ended my India political project. Just finishing up a book, later to be called BFN.

Given his insistence on having a liberal party and my experience that the greatest shortage is of leaders to kickstart the work, I resumed India-related (Freedom Team of India) to support Anil and find others like him.

We were able to find some superb leaders – like Dipinder Sekhon, Rahul Pandit and Kamal Sharma (and Ram Atri, who has, however, quit political work subsequently), as a result of which SBP was formed through a rather circuitous route that went via Baba Ramdev.

There were others who were initially part of the FTI journey but who fell by the wayside for their personal (e.g. health) reasons, like Supratim Basu, or who decided that short-term methods (like joining AAP, which a few like Somnath Bharti and Shantanu Bhagwat tried; others like LK Kandpal went on to support BJP) can work.

But by now, SBP is firmly established and is not going anywhere. And after its establishment, many outstanding leaders like Sanjay Sonawani, Sanjay Garg and Pankaj Das have joined. And superb young leaders like Rabi Kant Bharti and Mahesh Maurya have come up. There are tens of others, as well – all over the country, supporting this work in some way or other (you’ll excuse me if I don’t name all of them in this brief post).

The party is now on a roll. It is going nowhere. It is here to change India. 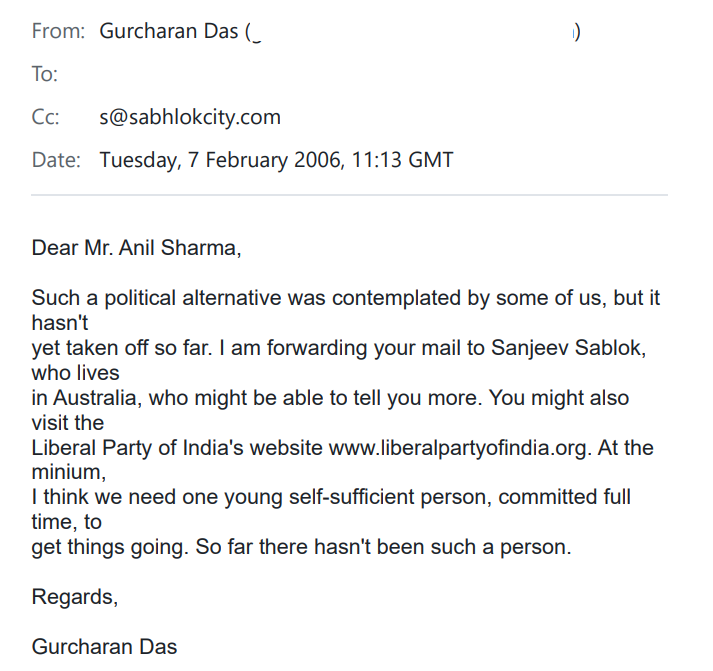 I let the Liberal Party website lapse (can’t keep paying for so many websites). The page in 2005 looked like this: https://liberalpartyofindia.sabhlokcity.com/old-homepage.html

This entry was posted in Swarna Bharat Party.

« One day I’ll say some more about this (re: Gurcharan’s legacy)
Minutes of my first attempt to form a liberal party in India – January 2000 »
View more posts from this author