Tweet
Email that I’ve sent out to a few people:
This chart below is the final nail on the covid panic (and yet, this is a serious disease – I don’t mean to downplay its seriousness – see my text below). 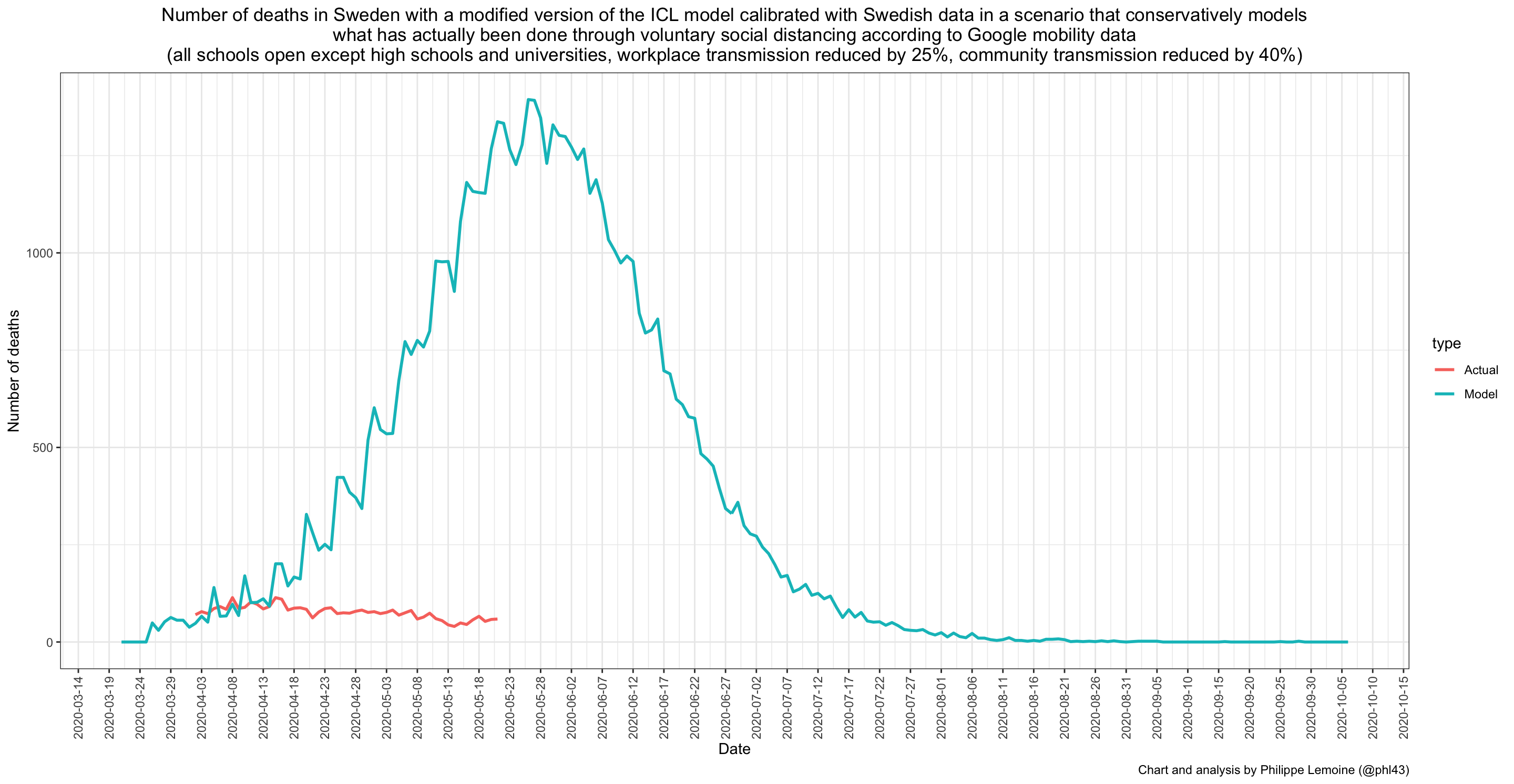 This chart was created by someone who used Neil Ferguson’s model, applied it to Sweden, and then plotted actual deaths (see tweet).

And btw, my research (a couple of hours of googling) confirms that for the world as a whole, there’s been virtually no virus that has ever infected more than 25% per cent of the population. Spanish flu infected only 25% or so (see my tweet thread) – that that was without any vaccination; H1N1 (2009) infected 24%, As a general rule, pandemic influenzas only infect a quarter of the people (see New York government’s website).

This confirms the validity of Anne Marie Knott’s analysis. Not more than 20-30% persons in the average country are likely to get this coronavirus, no matter how hard they try. This proportion is also called the attack rate by some epidemiologsts (e.g. Encyclopedia Britannica), but other epidemiologists use a different meaning for attack rate (the number of persons one infected person can infect), so let’s just call this the infection rate.

What explains this huge gap – why don’t the other 70-80% of the people get infected? The innate immunity issue is very significant here (and it varies for each virus), and the viral load factor. Viral loads are low in most adult interactions and probably highest in pre-school centres, but children seem to have innate immunity for this virus (something for future researchers to explain). In elders innate immunity decays rapidly – therefore two-thirds of Kirkland Life Care Center nursing home’s residents caught the infection. The 25% infection rate is only an average.

Now coming to Sunetra Gupta’s analysis that there will be no second wave in some places.

From the Spanish flu example (for which there was no vaccine), we see that herd immunity for such viruses is generally around 25%. The estimate of 60% bandied about by “experts” is absurd, to say the least. For COVID, HI levels should be in the same range, i.e. 20-30%.

Antibody figures in parts of UK and Sweden are close to 20% (or slightly more). And we know that the actual extent is likely to be higher since not everyone produces measurable antibodies. This confirms that the further spread of this virus in these countries is going to be extremely slow – close to non-existent. Therefore Sunetra Gupta is correct.

The basic point is that the initial modelling was absolutely off the charts. Neil Ferguson (copied into this email) might wish to publish a public statement withdrawing his extreme estimates.

I’ll do so some further work and write about it in next TOI blog post over the next few days. Happy to have any thoughts/ inputs to this analysis, so that I don’t make fundamental mistakes!

« Next TOI blog post and comments: Why less than 25% of the world’s population is likely to get Covid-19
URGENT: Herd immunity for COVID-19 could be as low as 15% »
View more posts from this author