My response to Aruna Rodrigues’s email

This is my preliminary response. I’ll also get this vetted by reputed scientists and update it if necessary.

As usual my comments are in blue.

For starters, Organic and GMOs – Vandana is not only right, but quite right. The latter eliminates the former, because co-existence (between GMO and Non-GMO) in not possible. GMOs in their technological avatar of BT and HT Crops are indeed pesticidal crops and Bt crops internalise Cry Toxins and HT crops absorb significant quantities of the herbicide they are designed to withstand and designed to absorb.


Sanjeev: Aruna doesn’t seem to have got my point. 1) Cry “toxins” are organic proteins, not inorganic chemicals. 2) They are digested by the human body since we don’t have receptors for them. In fact, by Bt brinjals not having pesticide residues on them, they are much more organic than most (i.e. fake) organic foodstuff sold in markets. Also, many US farms grow organic and conventional/GM crops on the same land holdings. Coexistence is only an issue if one is trying to keep variety-protected seed, and it isn’t about GMOs anyway. Finally, if Bt was so poisonous, why is there no agitation to ban organic farmers from using Bt as a spray? Because Bt is ABSOLUTELY SAFE.

Further, Aruna needs to know that Bt Crops are referred to as Bio-Pesticidal and not Pesticidals which typically refers to the nasty pesticide sprays.

“I have a lot of friends who are organic farmers. They use Bt spray formulations. I am at a loss to understand how this woman who vetoed science benefiting farmers conclude that Bt gene in the seed is harmful and the Bt Spray by the organic farmers is safe?
“I am not averse to ‘ Organic Farming’. Happy that my friends sell their organic food at a high premium and make good profits by exploiting the niche market. But I am worried about the consumers of organic food as I know what substances the organic farmers spray on the fruits, vegetables, and greens. They use Cattle urine, cow dung, fermented herbs. The consumers are not aware of the contaminants of Organic Food. Why not subject it to regulatory and prove that such foods are e Coli bacteria-free before taking it to the market.”

There are serious, very serious  questions of biosafety connected with both. The outstanding issue is one of  irreversible contamination

Sanjeev: These are organic proteins that are broken down and digested. NO RESIDUE REMAINS inside our body (unlike from paints or Ayurvedic medicines that contain gold, silver and other metals).

I have checked that Aruna means by “irreversible contamination” that the pollen carrying a new gene escapes into nature and will be unable to bring it back. Well, that may well occur in a few cases, but note that:

a) this is a beneficial gene going into nature.

b) it is unlikely to generate new hybrids because the many wild type relatives have huge differences in ploidy and thus will be fertilization incompatible.

c) if a given gene is not useful for the plant to survive, that gene fades away.

and in so far as brinjal is concerned, we are the richest source of brinjal genetic diversity (germplasm) in the world with 2500 varieties and wild species.

In August 2008, the Bt. Brinjal Biosafety-Dossier having remained unpublished for sixteen months despite a Supreme Court order, was eventually released into the public domain when the Regulators were forced to comply with its full publication (with the raw data), which then revealed its fraudulence when examined and appraised by independent scientists of international stature —  studies said to be done were not done, as many as 36 of 37 environmental studies, leaving aside other risk assessment protocols.


Bt and related technologies can be introduced into any variety or hybrid, just like the Intel chip can go into any laptop or PC. So if a variety or a hybrid of brinjal was not being actively used by farmers previously because of its susceptibility to stem borers, with Bt it can be revived because it may have other beneficial traits. Therefore more varieties and hybrids of brinjal can be produced, giving farmers and consumers a diversity of choice.

If Aruna or anti-GMO people think that Bt Brinjal is a single type of GM crop and will dominate 2500 varieties and hybrids, then they are wrong. In fact, Bt technology can be infused into any of the above 2500 varieties and hybrids and bring many of them out from oblivion into cultivation. Bt is a technology that can be inserted into various species (hybrids) and is NOT a crop per se. Will be good if Aruna learns some biology.

Many traditional varieties have been actually lost due to minor adverse traits, such as their inability to fight BLB, Bacterial Sheath Blight, Tungro virus, blast or those susceptible to pests or had high lodging characterstics. Genetic engineering can breed out these weaknesses, allowing many forgotten varieties to be revived.  In addition, overall ecological biodiversity is enhanced through intense farming which increases productivity and reduces the need to cut down of forests that would otherwise convert into agriculture. In this regard see Chapter III on Biodiversity. This means that biological control agents (parasitoids and predators) are also diversified and can play an enhanced role in pest control (especially sucking pests) due to drastic reduction in spraying chemical insecticides. Several scientific references are available on the role of Bt crops in promoting biocontrol and integrated pest management.

For instance, prior to Bt cotton, there were only a handful of cotton hybrids. Now, there are 1065 Bt cotton varieties provided by 65 seed companies. Due to reduced pesticide usage, there is now much greater biodiversity even of natural predators.

Farmers’ direct experience: Ravichandran Vanchinathan, a farmer of Bt cotton has reported this: “In the non Bt cotton era, I used to spray chemicals at least twice a week, including to control boll worms. The pesticide industry were monetarily rewarded by boll worms while farmers harvested frustration. These chemicals eradicated all insect predators like lady bird beetle, spiders, dragon fly, crysopa. Honeybees were also eliminated. Now I spray just twice, that too to control the sucking pest. As a result, today I see lot of honeybees humming and ladybird beetle fluttering in my field. Thus I’m satisfied that by growing Bt cotton I am able to maintain the biodiversity in my field.” And see another farmer’s perspective, here (farmer GS Mann).

As for metabolism – Are you saying you understand it? All the major medical research institutions in the world are still getting to grips with its still unknown depths. Indeed Monsanto has made hay for decades saying that the Bt gene is only lethal to alkaline gut systems ie worms. The myth was promoted with the help of both the US Regulators and quickly adopted by our own. Now we find this is not the case.

Sanjeev: I’m happy enough to accept the explanation by the Environmental Protection Agency of the USA, here.

“The EPA believes that protein instability in digestive fluids and the lack of adverse effects using the maximum-hazard dose approach eliminate, in general, the need for longer-term testing of Bt protein plant incorporated protectants”.

And I’m very comfortable with findings that NO HARM has been caused to any human to date. 23 years is a long time to have consumed GM foods and still not be affected. No one has been harmed. And studies show that animals have benefited. Bangladeshis have eaten Bt brinjal in tonnes and no one has been harmed. I have asked for A SINGLE study that proves harm to any human. None has yet been produced to me. Instead, the benefits of the technology are huge, in terms of increased productivity. I understand Aruna is a kind of economist, then she ought to do a cost-benefit test.

And we also find that Bt cotton has failed from the govt.’s  own admission and data. But that is another story

Sanjeev: What is this business about “failing”? No idea what Aruna is talking about. Bt cotton has been a HUGE success. See also CS Prakash’s recent tweets (which I’ll presently put out on a separate blog post) 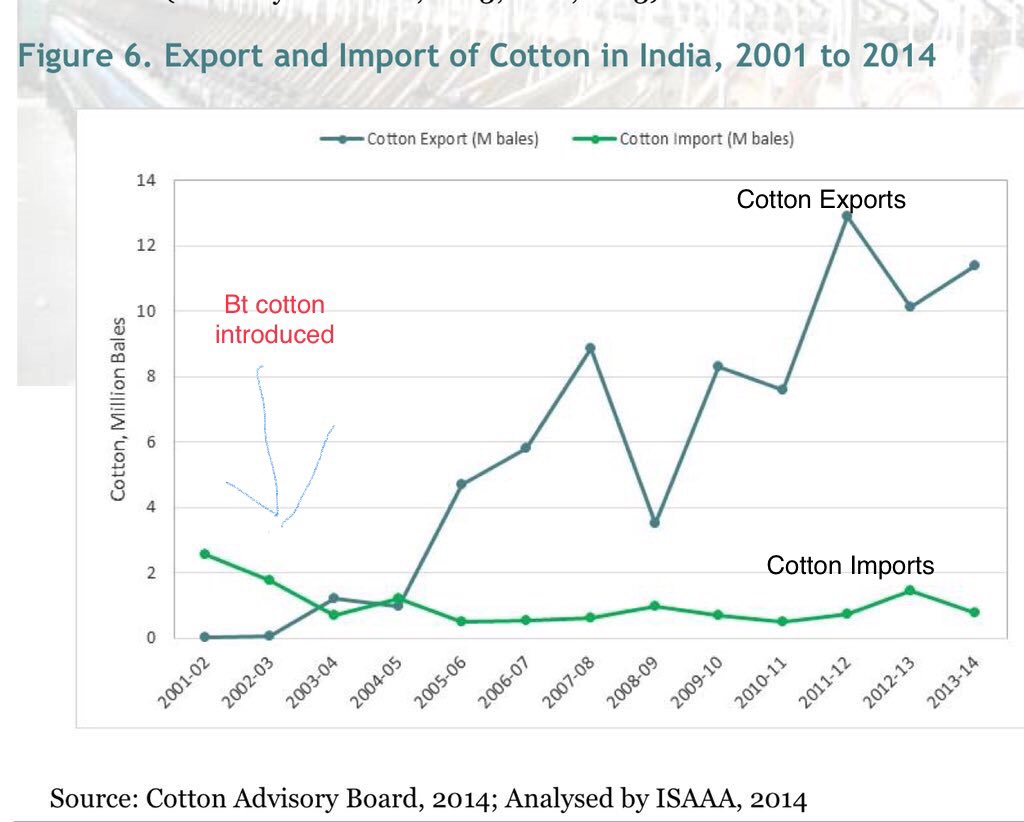 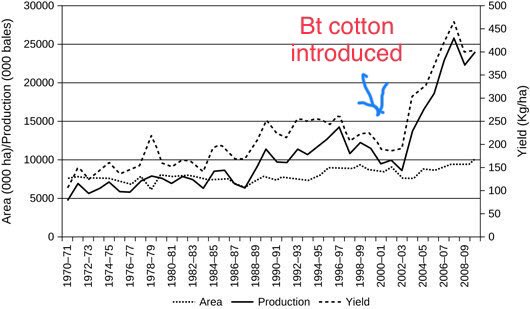 “—-Convinced that these developments are not merely slippages due to oversight or human error but indicative of collusion of a worst kind, they have recommended a thorough probe into the Bt. Brinjal, matter from the beginning up to the imposing of moratorium on its commercialisation by the then Minister of Environment and Forests (l/C) on g February, 2010 by a team of independent scientists and environmentalists” (Recommendation – Para No. 2.79

Sanjeev: I don’t believe the Indian parliament contains the expertise of its scientists and the world’s scientists. This is not a political matter but a scientific one.

A GENERAL POINT FOR ARUNA

Note that many of these are the same points I dealt with in Kavitha Kuruganti’s TOI blog post already and elsewhere.

There is an underlying ideology that drives these “alarms”. You will invariably find socialists and statists on the side of the “precautionary principle” and “global panics”. The Club of Rome alarm, the Ice Age alarm of the 1970s, the Global Warming alarm today, the anti-GM alarm, are all enablers of socialist control.

Anti-GM- alarm in the face of overwhelming evidence of net benefits is a sign of MARXISM, not of reason.

Also note that I’m an environmental freak and want massive changes to the policies in India which are causing havoc to the environment and human health. These are far more serious than any “harm” from GM (noting that I’ve no found any, yet). Things like hazardous waste, Ayurveda, plastic waste, etc. We need to actively work on those issues first.

Consider this, for instance. Is this something you want to work on? Then you need to join Swarna Bharat Party and help change India’s socialist policies.

2 thoughts on “My response to Aruna Rodrigues’s email”