I don’t have time to keep track, but will update here as and when I find time. I’m mostly posting on twitter under #KisanSatyagraha

There have been many other events since then. I’m counting the events with the 10 June as #1. 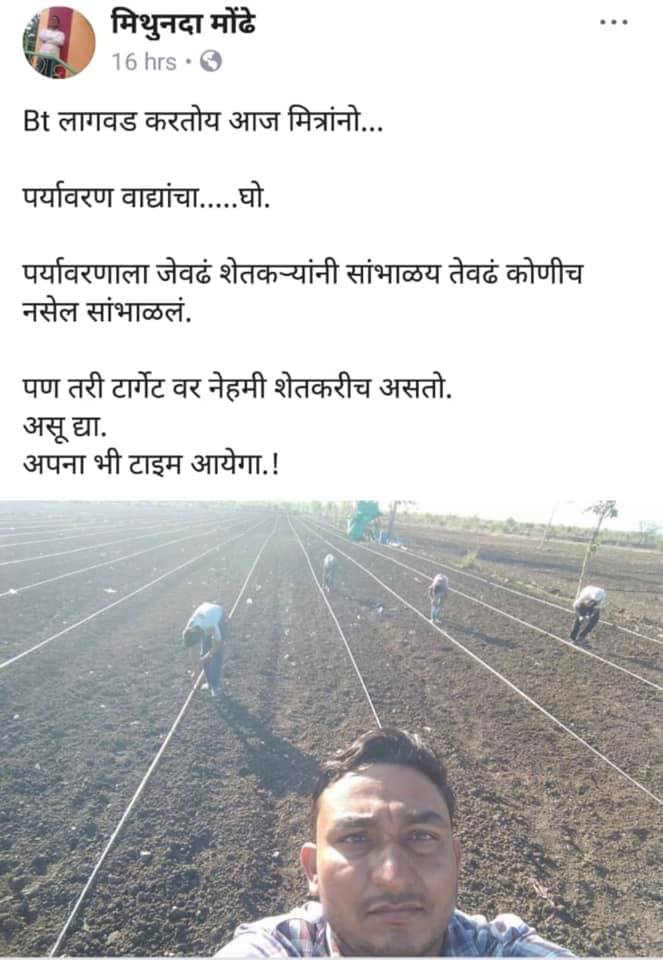 Video of civil disobedience in favour of GM crops by Shetkari Sanghatna on 16 June 2019 – a slightly longer version at https://t.co/zuE8x6j0Dc

This was yesterday: Pramod Talmale from Plugao, Wardha district sowed HT BT cotton seeds in 3 acres of land owned by him. He says, he knows he is breaking the law. He won't abide by a law which hampers his progress and restricts his freedom.

Nilesh Nemade, a farmer from trlhara taluka, Akola dist. Maharashra. openly planted htbt cotton seed in one acre of land. Around 200 farmers were present on the field. Agriculture office team and police were present on the agitation site. #KisanSatyagraha

Maybe a photo or other evidence later.

Swapnil Raut, a farmer of Hiverkheda village, Tal. Telhara, Dist- Akola sowing HTBT cotton in his field today 30 June. This was a selfie he shared.

Sachin Dafe in Wardha, Ready to sow HT Bt cotton. Looks like one of the many solo actions that have occurred over the last few weeks.#KisanSatyagraha pic.twitter.com/qhgX3qQy1m

Today gap filling operation was conducted with public reporting through this selfie.

Civil disobedience in India to fight for GM crops:

HT Bt cotton being planted in the farm of Chiranjilal Bishnoi of Sarangpur village of Hisar district.

Civil disobedience by public disclosure of his breaking the law for FIVE YEARS.

This entry was posted in Swarna Bharat Party.

« Translation of a German article on the recent civil disobedience by farmers
Do the greens have a plan to wipe out human population? »
View more posts from this author