Today I received a “copyright strike” from Rajiv Malhotra’s Infinity Foundation.  Youtube is also forcing me to take a “copyright school”. This is pretty shocking. I wasn’t aware that it is so easy to game Youtube. I’ll keep a copy of any of all my Youtube videos for the future. This video was also circulated by theprint.in here.

As far as I know the video had received over 13,000 hits – and was attracting a large number of comments each day.

SOURCE: I got the video through this tweet from Richard Fox. However, the link he provided is also no longer working. Clearly the Malhotra magic has worked to wipe out even that record. [Note: the image below is not a working video, just an image]

From what I can deduce, the video was NOT Rajiv Malhotra’s (or Infinity Foundations!) own property. It was made at a Nityananda’s event. The copyright claim should have come from Nityananda – if at all he had any claim – noting that his videos are widely available on the internet and being a “guru” it is in his interest to circulate his videos widely.

2. AFRAID OF WHAT HE HIMSELF SAID?

That video which he got Youtube to remove merely showed he is an utter fool. Now he is seen also to be a scoundrel, afraid of what he said becoming public.

The “great man” is a petty coward. He has used a fake “copyright” notice to take down his video. Such mortal fear the man has of what he himself said becoming known to the rest of the world.

Even if the video is copyright by Infinity Foundation, the tiny extract that was on my channel would have been covered under the fair use policy. If I had time and money and inclination, I’d have taken this matter to court. That would have made this video and the man’s folly even more well know. But the man is a nobody so I’ll move on, except for publishing his video once I find it.

Now that Rajiv Malhotra is occupying a formal role in a government funded institute (JNU) it is crucial that students and faculty alike all over the world are aware of his antics. It is crucial that this video be made widely available in the public interest.

THE SCOUNDREL MUST NOT BE SO EASILY ABLE TO HIDE FROM WHAT HE SAID!!  If  anyone has a copy of that video, please send it to me and I’ll upload directly on my blog. 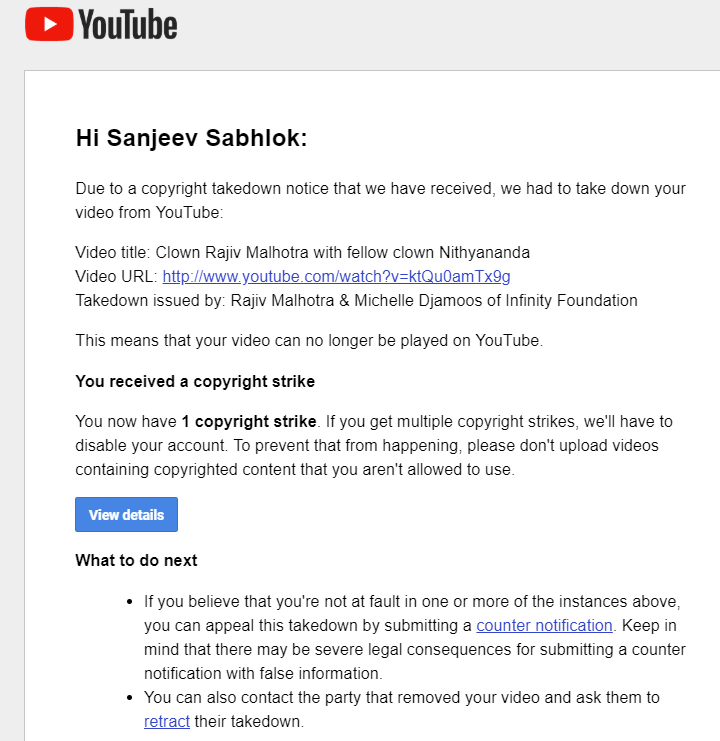 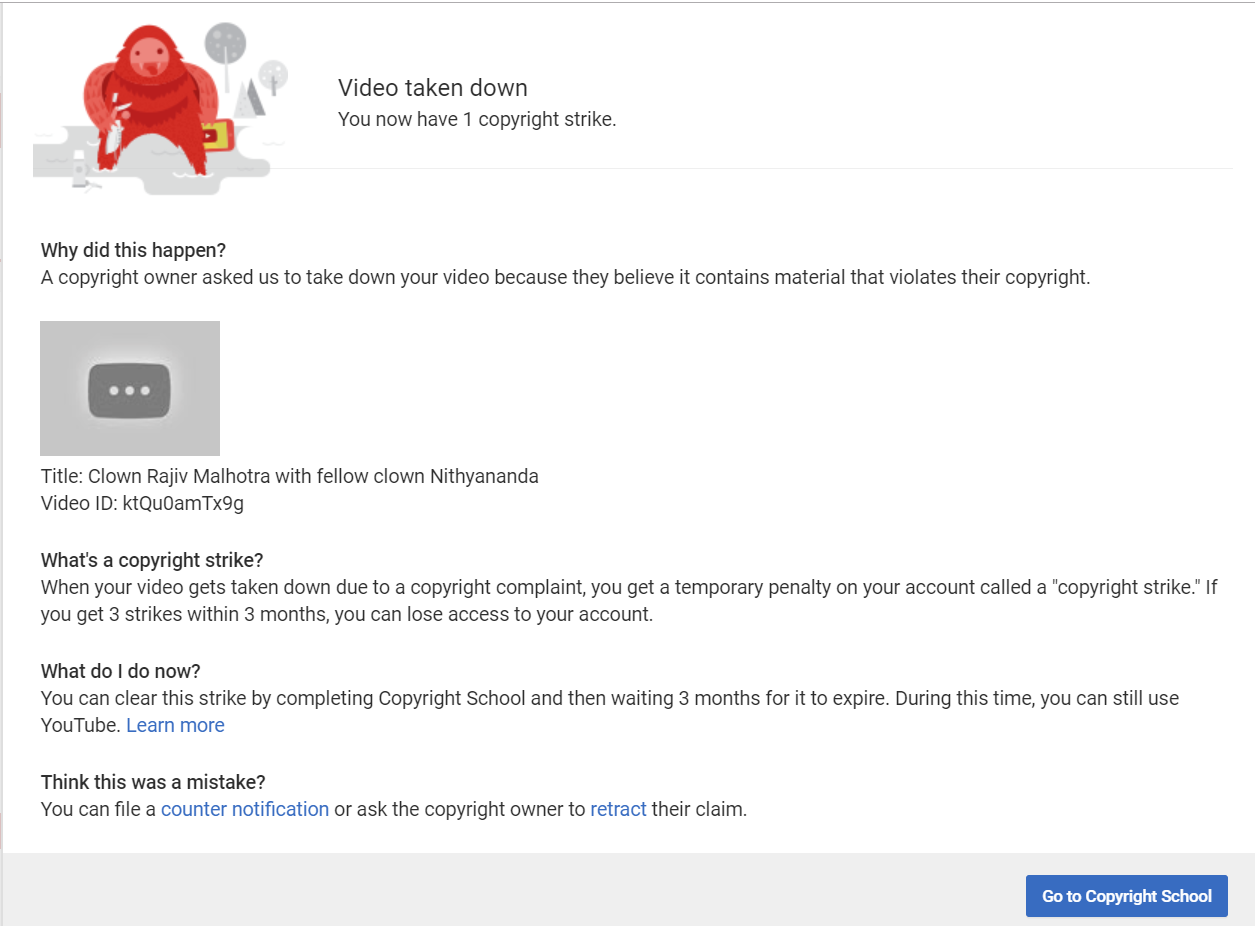 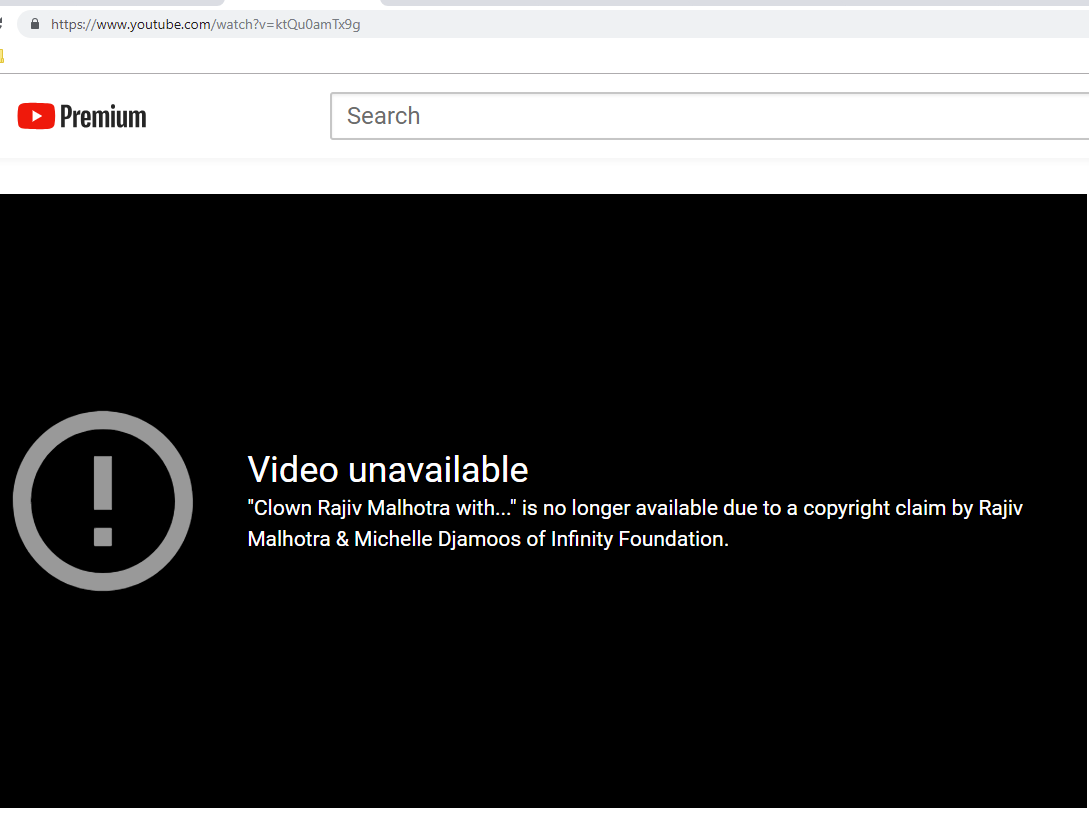 This entry was posted in Bad ideas!, India.