When Ambedkar called for burning India’s Constitution and called Nehru and his gang rakshasas, “Asuras”

But by 1951 he had formed irrevocable differences with Nehru and resigned.

He was given a seat in the Rajya Sabha in 1952 and in that capacity chastised Nehru and the Congress government for its extreme transgressions against the fundamental structure and principles of the Constitution.

When I go back to Melbourne I’ll OCR and publish the relevant sections of Ambedkar’s comments in the Rajya Sabha, but at the moment I’m just publishing the PDF and a relevant image. Thanks to Makarand Doijad for providing me this document, about whose existence I was unaware. It is ASTONISHING how Ambedkar and Rajaji desperately cautioned Nehru against going down the path of destruction of fundamental rights but the socialist that he was, Nehru was INTENT on destroying India. 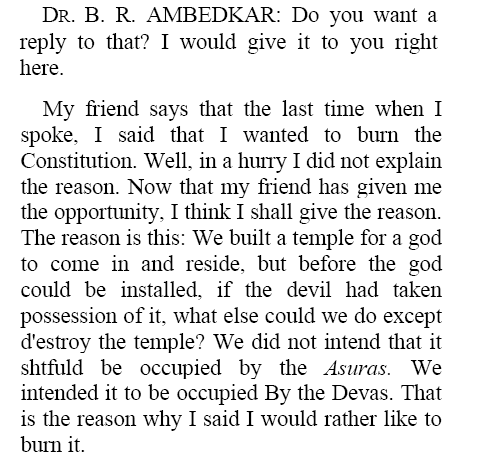 More on Ambedkar’s call to burn the Constitution: my FB post.

I was reviewing google for Ambedkar and “burn the constitution” and found this.

This is EXACTLY why Ambedkar himself asked in 1953 and 1955 in the Rajya Sabha that the constitution be burnt – for the Congress had by his time badly destroyed fundamental rights.

It must be a fundamental right to burn the Constitution and the flag – and anything else including religious books.

Non-violent protest which involves burning a paper or cloth is not a crime but part of freedom of expression – the reason Ambedkar wrote the fundamental rights.

The constitution was also burnt recently in Delhi. And in Haryana.

« Why I vigorously oppose Deepak Lal and Jagadish Bhagawati
My 3 October talk at Pune’s Entrepreneurs International Club: Why India’s petrol price is so high »
View more posts from this author