An urgent need to re-assess Ambedkar’s ideology, given his 1955 statement that “I am not a socialist”

I’ve never read Ambedkar in detail – just very cursorily. So many were his contributions and commentary that it is literally impossible to know all of them unless one undertakes a serious four year PhD to study him thoroughly.

In 2011 I was delighted with research by Balakrishnan Chandrasekaran , which seemed to confirm that Ambedkar was a free market economist almost on the lines of the Austrian school. Ambedkar made strong comments against government management, comments in favour of free banking and in favour of decentralisation.

But in 2017 something prompted me to do my own research. I went through a few journal articles and concluded that Ambedkar was actually a supporter of socialism. After reading those analyses I formed a dim view of Ambedkar as an economist.

Now, in October 2018, Makarand Doijad has provided me evidence to argue that Ambedkar was not a socialist.

This is the most prominent Exhibit: 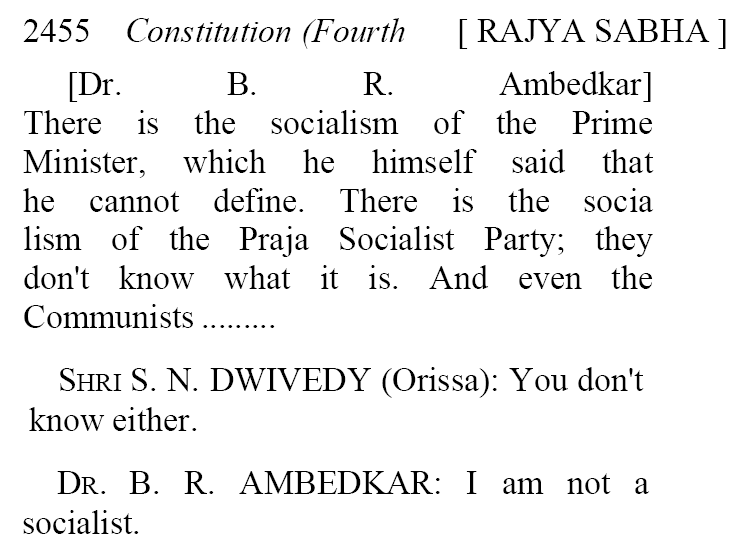 So what’s going on? Why are some writers telling us that Ambedkar was a socialist, even thought he himself said he is not?

According to Makarand Doijad: “Dr. B R Ambedkar never supported Agricultural land Ceiling Act. He opposed anti farmer laws to include in ninth schedule during 4th Constitution Amendment in 1955. He opposed to include socialist word in Preamble in Constituent Assembly. He himself said in Rajyasabha that he is not a socialist on record.”

Things are getting a bit complicated. I’ll write to Balakrishnan Chandrasekaran to get his views. I’m desperately short of time at the moment, but this is a crucial issue for Indian liberalism. We need to resolve it through research.

« Please join me to fight the Indian system which not only kills innocents but makes beggars of their families: the case of Ramji Misra of Gopiganj
All the socialist IITs of India together can’t build a SINGLE footpath or storm water drain »
View more posts from this author