The “Brahmin” hero, Parag Chakraborty – my, my, what a great man!

A man committed to trumpeting own greatness – as a “Brahmin” – by name of Parag Chakraborty, came to one of my blog posts the other day and put out some of the most amazing comments I’ve received on my blog:

In USA Bengali Brahmins have 5000 population and from that population we have 1200+ patents which is best stat in the world.In USA we have also won 14 grammy awards(Ravishankar and his daughter Nora Jones),2 Pulitzer winners and one of the greatest microbiologist dr Anandamohan Chakraborty.

So don’t comment about your superior MASTER Bengali Brahmin and stay under our feet.

Google this name:Inventor Arpan Chakraborty.At age of 32 he(my cousin) has 190 patents.He will go down one of the greatest inventor of all time.My uncle inventor Amit Chakraborty has 113 patents and I have 48 patents at age of 26.

Read this blog-Indian/Chinese IQ puzzle(comments 949-981).I wrote about it there and since then whole world follow us on twitter.

We are not third rate Brahmin as you first class idiot have commented,but we are best in the world.Now be jealous of your superior MASTER.

He then took my bait [see this] and provided some of his details. I now have a bit of a profile about him.

Worth discussing briefly, and placing this on the public record.

I do so not out of malice, but out of pity. For him. For his pathetically weak sense of self-worth, for his need to have his “accomplishments” praised, for his need to attribute his accomplishments to “Brahminhood”, and for his comprehensive failure to analyse society or economy or to even understand what I wrote on my blog post.

A sad case, to be much pitied.

FIRST, WHO IS HE?

His nickname is Sampan. A graduate of Pune University, he currently lives in Sunnyvale [probably one of these places].

This is the screenshot: 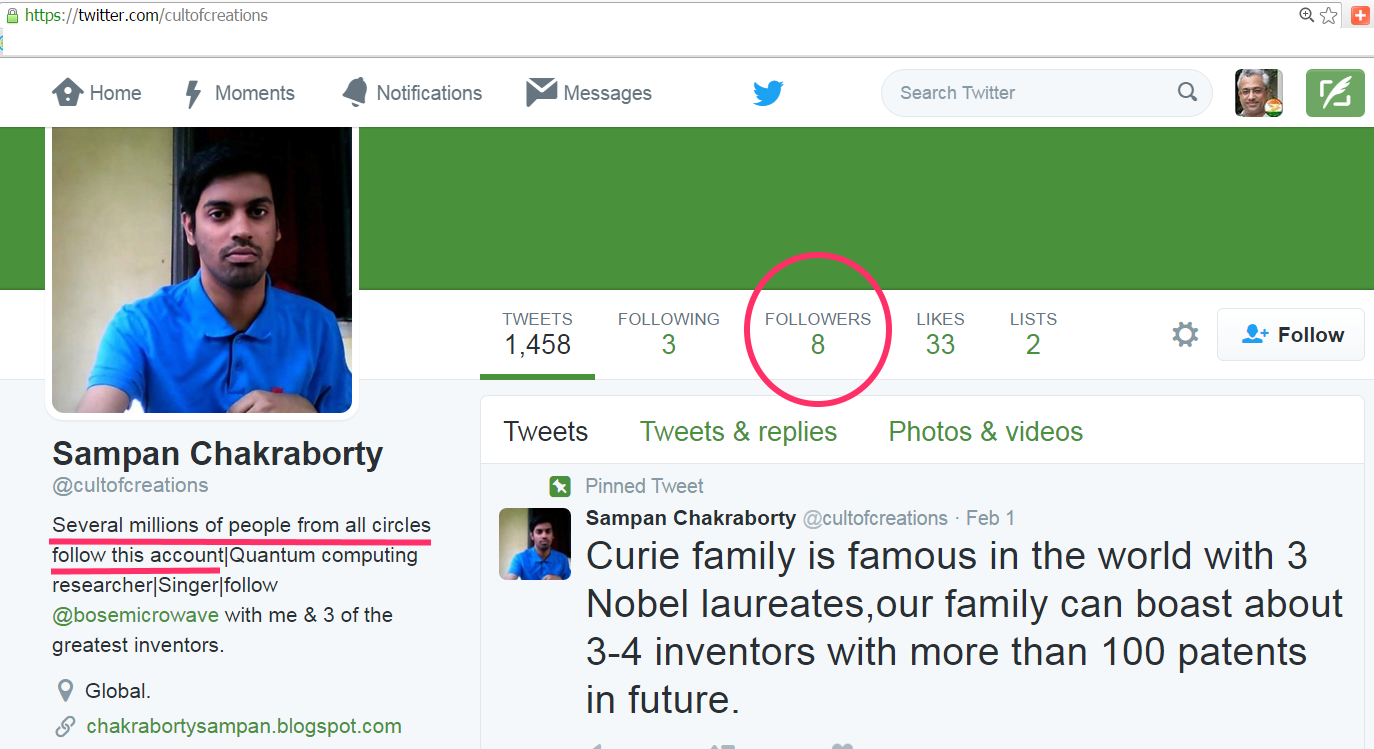 I’m sure there is some convoluted argument by which 8 (eight) followers translate into “several” millions.

But that’s not the point. The point to note is that someone cares so much that a large number of people “follow” him, that he makes that the key qualifier of his profile.

I have a suspicion the man failed to compete with his peers in standard, well-regarded approaches in his field (e.g. IIT entrance exam?) and has made it his life’s mission to chrun out petty patents on every topic under the sun, and to boast about his being “Brahmin”, in order to prove his “greatness”.

A man much to be pitied.

I encourage him to not feel so inferior. He has tried to rise from the pathetic socialist education system of India and has moved to the USA where anyone who puts in some effort can do well.

I wish him well in his future endeavours.

In particular, I recommend he try to understand basic economics and political philosophy (and biology). Doing so will show him why some countries succeed, and others don’t. America doesn’t have “Brahmins”, but the average American has produced wonderful stuff, including innovations in every field of life.

What matters, dear Sampan, is FREEDOM. When you’ve understood that, your fever about your greatness, or the greatness of “Brahmins” will disappear.

In relation to “Brahmins”, I hereby anoint all Dalits as Brahmins. And I challenge anyone to oppose me. These ignorant fool “Brahmins” have made India the socialist hell hole it is. The filthtiest place in the world. The poorest place in the world. These fools don’t understood the basics of economics or governance and flee to live in the West, since they can’t do anythign about their own country.

The only Indian in pre-Independence India who understood economics was Ambedkar, the man they oppressed and ridiculed.

And they try to tell others they are “superior”. Such fools are to be deeply pitied. They know not, AND CAN’T KNOW what they don’t know.

I encourage Sampan to abandon religion, which is the most false and spurious idea ever invented. Sampan, if you understand even the BASICS of science, you’ll give up the nonsense of religion. The fact that you don’t, says it all.

Unfortunately, some people may be fundamentally ill-equipped to understand. Understanding economics, political philosophy and biology is not for everyone.

But I encourage you to do whatever little you can, with the equipment you have been born with.

This offensive fool Parag has now started using vulgar gutter language that suits his low IQ. I have a rule I don’t publish such rubbish, but in this case I’m retaining an image file of his comment for the record.

This entry was posted in Bad ideas!, Religion, Science.

« Agriculture must be liberated so our farmers can flourish, says SBP President, Vishal Singh
A civilisation that has no regard for truth and freedom will become irrelevant »
View more posts from this author