I chanced upon Yadu Singh a number of years ago, probably through his blog, first, then Facebook. Then we met in Melbourne.

I thought he was a bit confused about many things, but that’s typical of professional Indians abroad who have no clue about public policy.

Over the years, I’ve had a number of differences with him – mainly regarding his interpretation of freedom of speech (he is a full-fledged anti-free speech bigot) and his repeated generalisations against all Muslims, but left these issues unresolved, in the interest of time.

Now, however, things have come to a head.

I’ll post a series of blog posts to discuss this man. I would normally have merely unfriended him and that would be it. But this man purports to represent Indians living in Sydney. He is part of what is called Federation of Indian Associations of NSW Inc. I’m sure these people (and others like them) will be keen to know about the exploits of someone who purports to represent them. He also keeps engaging with politicians from Australia and speaks “for Indians” in the local media.

Such a bigot cannot claim to represent the Indian community. We must take this man’s utterings seriously and hold him to account.

“Hindus” like him (who know NOTHING about Hinduism and bring great shame to the liberal tradition of Hinduism) are a danger to Western societies, apart from being an threat to societies like India. They are all anti-free speech, divisive, and determined to generalise about other people merely because of their religious or other attributes.

Let’s start with what set me off into a detailed discussion with Yadu. This will take time. One by one.

Beef eating is the way for Islamists in India to humiliate Hindus who have religious reverence for Cows. #UnitedHindus should speak up! 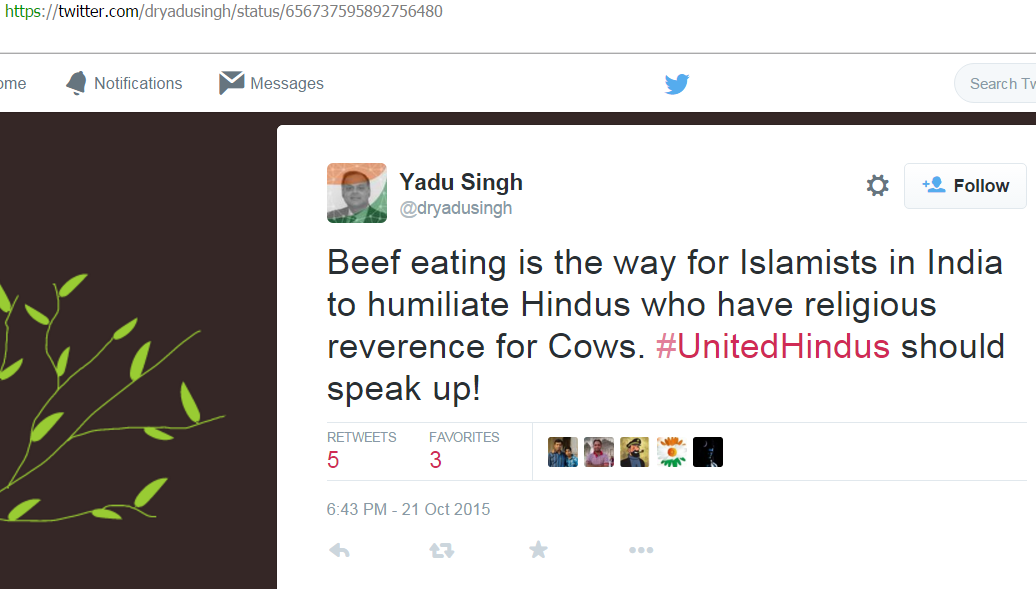 If “Hindus” were a majority in Australia, Mullah Yadu Singh would force ALL Australians to give up beef

Dr Yadu Singh patients should be aware of his deep hatred for beef eaters. Are you a beef eater?

Dr Yadu Singh thinks India is a Hindu nation like Pakistan is an Islamic nation.

Comments by others re: Yadu Singh’s incitement of Indians to bigotry/violence

In closing, I ask Yadu Singh to promote LIBERTY and peace, not bigotry and violence

This entry was posted in Current Affairs, India, Liberty.

« Analysis of Yadu Singh’s extreme hatred of beef eaters and strong allegation that beef eaters are violent killers (“Islamists”)
My advice to Australians: Boycott India till it commits to human rights and basic human liberties »
View more posts from this author