Swarajya magazine is a disaster because its editorial director, Sandipan Deb, is a socialist Modi bhakt

﻿At one time there was this thing called centreright.in. I recall reading a few articles on that website from time to time. I notice that Harsh Vora, FTI member, contributed some articles to it.

In the meanwhile, centreright become Swarajya.

I was delighted when I first heard that someone was taking forward Rajaji's legacy. I widely circulated news about Swarajya to everyone I knew. Maybe to 5000-10000 people.

I was anticipating something really good.

Since it has come out, I've not read all of Swarjya, but two of the articles I've come across have totally put me off.

1) No Country for Other Ideologies?

I've commented on these here: Swarajya magazine has MUZZLED Rajaji’s voice. It is nothing but the voice of RSS and I can have nothing to do with it. – and on Facebook.

Today I decided to spend time to identify and review the owners/managers of this magazine. Here is what I found:

OWNERS
UNKNOWN: "Reluctant to divulge the ownership pattern of the magazine but state that Swarajya is backed by like-minded professional venture capital and angel investors with expertise in nurturing start-ups." [Source]

I know Bibek Roy very well and Surjit Bhalla well enough. Both are excellent economists and liberals. Jerry Rao is modestly liberal – nowhere in the league of Bibek Roy or Surjit Bhalla. Swapan Dasgupta is simply not in the same league. Extremely pro-BJP, hardly liberal.

Now to Sandipan Deb. I checked that he runs this blog. I then read this article Sandipan wrote last year: http://www.sandipanonline.com/modis-first-i-day-speech/. A more fawning view of Modi can hardly be imagined. And he ends his write-up with this:

for me, the most important point he made (other than the removal of that bullet-proof shield) is that he would ask every MP to create a “model village” within his constituency. This is a specific goal, its success easily verifiable, and in one stroke, puts pressure on the MP to deliver to his people. This simple scheme can have extraordinary ripple effects, and no extra government expenditure is needed. Every MP anyway has funds allocated for development of his constituency. It’s just that now, part of what he does with those funds has been formally delineated.

This will force every MP sing for his supper, empower the people, generate competition and pride, and is truly one of those simple ideas that makes you wonder why no one thought of it before.

This is deeply illiberal, 100 PER CENT SOCIALIST. It displays no understanding of governance systems, no understanding that villages don't become "model" villages through MPs' charity. To put it mildly, this is an absolutely idiotic view, typically shared by most "intellectuals" of India who have never spent five minutes to understand governance, incentives or liberty.

With such a confused Modi bhakt as its editorial director, is it a surprise that we are getting utter socialist gibberish from this magazine?

And who exactly are its owners? These are people who have chosen to hide their names. Why? Are they are backed by BJP/RSS/Modi? All very suspicious. I don't trust those who claim to be liberal but hide their identity.

But why do I even care about Swarajya – to spend time commenting on it? Had it continued as centreright.in I would have ignored these articles as being of one piece – the standard confused repertoire that comes from typical Indian "intellectuals".

But this is supposed to be SWARAJYA! That's a highly respected name. Deb even harked back to Rajaji in his interview that I've cited above. I had every right to imagine that this was going to be a genuine classical liberal magazine. It is not. That's what's bothering me.

Also that its owners are FLUSH WITH MONEY. They have paid off CCS to create indianliberals.in website which contains a link to this magazine (but not to the Sone Ki Chidiya agenda!!!). So now should CCS be deemed to be part of the Sangha parivar?

The term Swarajya has been hijacked by illiberal Modi bhakts who have little or no clue about liberalism. They definitely have no clue about Rajaji's work, and little understanding of painstaking further work on liberalism in India since Rajaji's death.

I will share this post with Bibek Roy and Surajit Bhalla for their information. Either they should get themselves a genuine classical liberal editor for Swarajya, or they should resign from the editorial board, lest their reputation is tarnished by some of the articles being published. 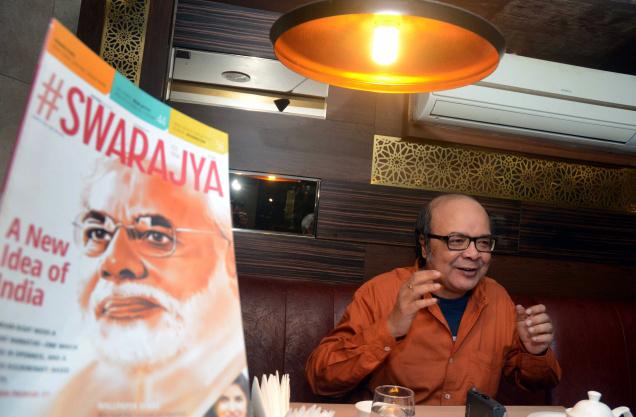 If further proof of Swarajya's BJP/RSS origins is needed, here it is – in open sight (and I'm excluding Rupa's strong defence of Adani):

"India Foundation, a think tank based in Delhi with ties to the Bharatiya Janata Party (BJP) and the Rashtriya Swayamsevak Sangh (RSS), organised a three day event at the Park Hyatt in Goa, 19-21, December 2014, at which there were some 350 delegates, both from India and abroad, and encompassing all walks of life.

Indeed, what was striking to me was just how accessible many of the senior politicians present were with only a discreet and not overbearing security presence. Ministers like Suresh Prabhu and Nirmala Seetharaman and Jayant Sinha were mingling freely among the crowd in an entirely unpretentious manner…

All told, the first India Ideas Conclave represents a hugely important first step in the creation of a non-left, non-politically correct, center right ecosystem which is still in its infancy and is yet to dislodge the mainstream establishment’s grip on a hegemonic narrative. That hegemony was built in no small measure by an ethos in which intellectual, political and other thought leaders of the left would frequently meet and share views in a convivial atmosphere. It was a refreshing change to experience that ambience in this alternative space that is slowly taking shape in India."

Know the real Narendra Modi -The making of a leader

And there is this article that BLINDLY AND SHODDILY exonerates Modi for his crimes.

Swarajya states "We will not be politically partisan". Well, there is ONLY one side that is being defended/ supported, and that is BJP/RSS.

Extract from an email from a 100 per cent reliable source: "the CEO, the Chief Financial Officer and the Publisher and Chief Digital Officer  of Swarajya are staunch BJP loyalists".

MY COMMENT IN AN EMAIL TO SOMEONE:
It is not that the magazine is blatantly anti-market. But it is deeply confused.

a) Instead of asking why we still have Doordarshan, it defended its right to publicise RSS's annual event, live.

c) Instead of calling for privatisating of nationalised banks, it defended the massive loan given by SBI to Adani.

d) Instead of asking for deregulated agriculture and end to subsidies, it supported the development of "model villages" that are funded by MP's discretionary grants.

And so on. What is missing is a clear principles-based approach even towards markets.

A FB friend conducted some research on Swarajya and identified Kovai Media Private Limited as the company that produces this magazine. The directors paid a pitiable amount to create the company (Rs.1 lakh). There is some major funding coming from elsewhere. Unclear who is actually investing in this, or (most likely) subsidising it.

Based on this I did some more google searching and came out with this PDF (which I've uploaded on my server, for safekeeping).

Deb did not divulge the amount of money being invested in the business but claimed the second round of funding has been lined up for March 2015. “The investors have a profit motive and they are also ideologically aligned with the product. However, no political party is an investor in this venture,” he said. [Source]

SOMEONE IS FUNDING THIS EFFORT IN A BIG WAY.

I have now found out that Aravindan Neelakandan – a co-author of Breaking India by that obnoxious and illiberal Rajiv Malhotra – is a PROMINENT columnist for Swarajya. In his articles, he has been rabidly fighting in favour of BJP.

How can such hardcore RSS types be part of a "liberal" magazine?

Rajaji's legacy has been badly hijacked.

« The brilliant Ajit Varadaraj Pai. How I wish we had even one such forthright person in India.
Swarajya magazine has MUZZLED Rajaji’s voice. It is nothing but the voice of RSS and I can have nothing to do with it. »
View more posts from this author

18 thoughts on “Swarajya magazine is a disaster because its editorial director, Sandipan Deb, is a socialist Modi bhakt”