Hats off to the woman who dared take on Pachauri, the predator 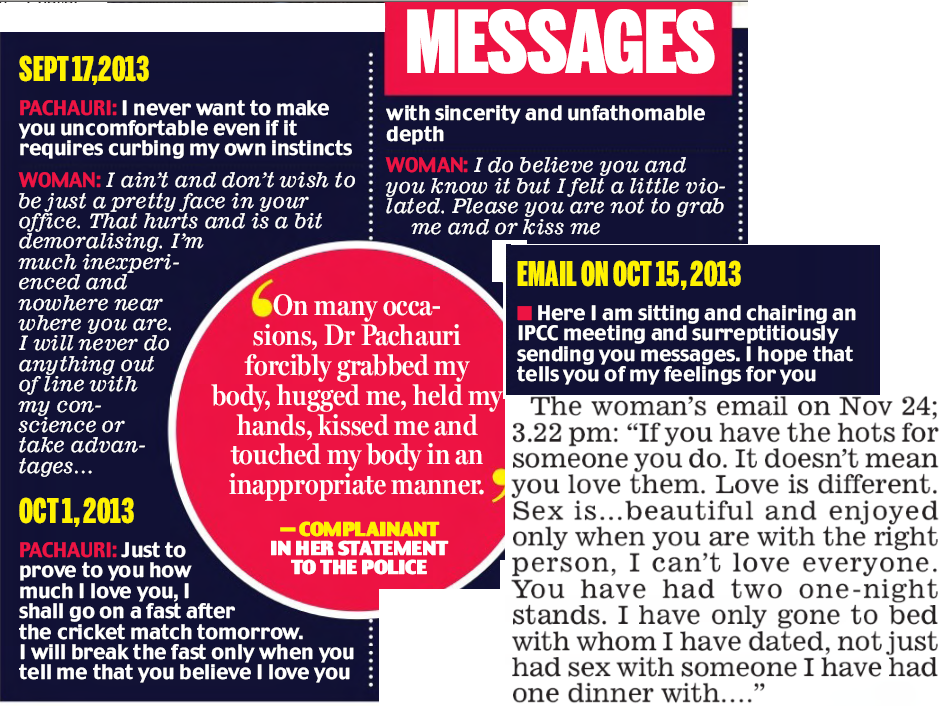 The case is open and shut. Pachauri took advantage of his official position to harass the woman.

One can only commend the woman who has dared take on this predator.

The consequences to the woman of such public reporting are now potentially less than they were some time ago. Mores are rapidly changing in the age of social media, particularly for highly educated women. It is almost as if a tsunami of change is occurring, particularly with the Kiss of Love movement, this year's Valentine's Day protests by modern Indian women, etc. I also suspect that cases such as the rape of a 25 year old in a Uber car in Delhi (with a civil case against Uber lodged in a San Francisco court, apart from criminal proceedings in Delhi) could have contributed to emboldening this woman to lodge the complaint. (http://www.bbc.com/news/world-asia-india-31052849)

Nevertheless, it remains a brave decision for the woman to go public and I commend her commitment to hold people in high places to account. It is time for Indian women to stand up for themselves and fight the (chronic) sexual harassment they face at work. Many Indian men in powerful places – for whom this kind of behaviour, or worse, is nothing unusual – need to brought to heel and made to realise that they can't bamboozle women with "the risk of social consequences" to get away with outraging their modesty. Particularly in this day and age of electronic devices, their time of philandering outside their marriage is now over. I'm glad this change is starting.

I suspect Pachauri's is a serial case (although I have no proof). He may have gotten away with may such cases in the past. I hope that other women (if any) he has sexually harassed will now find courage to speak up.

It is time for change in India. Women's freedom, dignity and rights matter. They are individuals and can't any longer be treated as chattel by men in powerful places. I hope other Indian women will come out in support for this women – who has dared to take on one of India's most powerful men.

Given the published data, the case against Pachauri is open-and-shut. In any other part of the world, he would locked up.

NO WOMAN SHOULD HAVE TO GO TO WORK TO BE HARASSED.

THE MAN SHOULD STEP DOWN IMMEDIATELY. WHY IS HE STILL HOLDING CHARGE OF TERI?

Minutes after I published this, I notice that other women have started speaking out against this predator. [Also in The Telegraph]

The man is a BIG LIAR. My comment on FB: THE MAN IS A LIAR. AS I HAD ANTICIPATED, HE IS A SERIAL PREDATOR. ANOTHER WOMAN HAS ALREADY COME OUT AGAINST HIM. AND THERE IS NO WAY HIS PHONE COULD HAVE BEEN HACKED FOR SO MANY MONTHS. ABSURD LIES. JUST LIKE HIS LIES IN IPCC – MERELY TO PAD HIS POCKETS WITH PILES OF MONEY.