The BARBARIC vegetarians of India and their brutal (criminal) treatment of “cow mothers”, “bull fathers” and “calf brothers”

This article: "Dark and dairy: The sorry tale of the milch animals" is an eye-opener – that cattle bred for meat is far more likely to live a humane life than its milk-producing counterparts. Also see this: The Dairy Industry: Sanctioned Rape.

Things never add up in India. On the one hand we have a culture of "masculinity" with extreme barbarity against women – e.g. against the female child (mass killings of infants by the "Hindus" are rife), and massive levels of violence against women. On the other hand, we make claims to be "non-violent" and oppose "cow slaughter". We also claim that the cow is our "mother" (and therefore the bull our "father" and male calves our "brothers").

The article raises a fundamental question: Which is better? To kill an adult animal that has led a good life in the open painlessly for meat or to cut short that animal's life itself when very young, to prevent that animal from living?

The answer, I'm sure would be simple: FAR BETTER to be allowed to live a natural life and to be painlessly killed for meat when old, than to be prevented from living altogether.

These are the kinds of crimes against animals committed in India – which has one of the world's worst records regarding animal rights and protection.

1) Killing male calves: preventing them even from living a life.

2) Preventing young calves from drinking THEIR OWN MOTHER'S milk

Calves, male and female, are separated or significantly restricted from accessing their mothers three to four days after birth. This separation is traumatic for both mother and calf, but leads to a 15-30 per cent increase in milk availability for humans. Following separation, calves are mainly fed on milk substitutes and are allowed only limited suckling. The mother’s milk is instead diverted for human consumption. 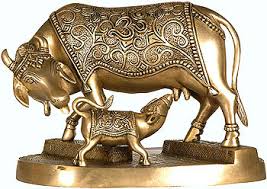 The above idol is purely mythical and this NEVER happens in India. No calf (including female) is allowed to drink its mother's milk. As usual, there is HUGE deception, chicanery and hypocrisy among the barbaric vegetarians.

We call the cow our "mother" but displace the cow's ACTUAL role of mother.

3) Forcing shut the mouths of starving male calves, who try to cry plaintively for their mother

Like human mothers, cows produce milk to nourish their babies. In the dairy industry, calves are stolen from their mothers immediately after they are born so that the milk meant for them can be consumed by humans. Their mothers cry out in vain, calling to their lost young ones. During PETA’s investigation of the Indian dairy industry, we found male calves whose mouths were tied shut with ropes so that they couldn’t cry out when they were hungry. These babies are then left to die a slow, agonising death in a corner. Once or twice a week, a haath gaadi wala comes by and picks up the dead bodies and sometimes dying calves and takes them to be skinned for calf leather. Some are used as draught animals where they are subject to castration without anaesthesia, nose-roping, whipping and hard labour [pulling massive weights] until they are old and weak. At that point, they are sent for slaughter or abandoned.

(Note the bull being forcibly laid on the ground with people sitting on top of it. The machine used is surely painful enough:

5) Abandoning to eat plastic and garbage

The following are abandoned to eat plastic/garbage:

– unproductive cows whether young or old

There is also HUGE environmental harm caused by the dairy industry, but I won't go into that here.

I won't go here into the brutal ways by which these animals are transported and slaughtered. ALL THESE ACTIONS WOULD BE CRIMINAL in any civilised society, but in India this is business as usual.

And these "holier-than-thou" vegetarians preach to the rest of the world about how "holy" is their "mother cow".

Forsooth! Have SOME shame.

10 thoughts on “The BARBARIC vegetarians of India and their brutal (criminal) treatment of “cow mothers”, “bull fathers” and “calf brothers””