Hindus agree that the buffalo is not sacred. Let there be a “EAT BUFFALO FOR HEALTH” movement in India.

I've discovered an interesting fact – that even the most fanatic supporters of the "sacred cow" hypothesis (it is a false hypothesis, but that's a different point) have nothing to say about the buffalo.

The buffalo is not "sacred"in India, or is just as "sacred" as a chicken. [Also this]

As a blog notes, "all the northern states have buffaloes now. Farmers have accept it because of clear increase in demand for buffalo milk and meat. There is no sentimental attachment to a buffalo" [Source]

Not only is the buffalo not considered sacred, it is sacrificed EVEN TODAY in many temples in Hindu India, like a chicken or goat may be sacrificed. (In the past even barren cows and bulls were so sacrificed, but that's not relevant to the point I have to make.) 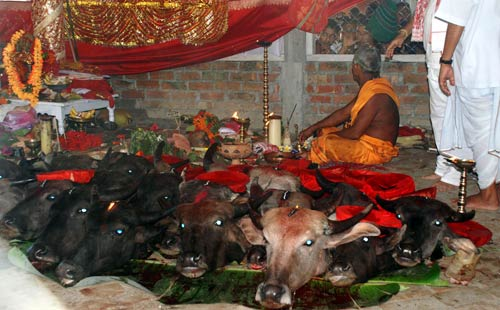 Kamakhya temple has buffalo sacrifice (Youtube). “Almost three to four  buffaloes are sacrificed at Kamakhya every month and dozens of them are slaughtered during Durga Puja festivities.” [Source]

There are regular sacrifices of buffaloes in some temples in Kerala, and there is massive consumption of buffalo/ cattle meat in Kerala.

The point I wish to make

I have no interest in people's personal food choices but it is clear that:

a) Regardless of the veneration (or otherwise) of the cow in India, the buffalo is NOT so venerated TODAY. (In the past only the MILCH COW was so "venerated", not barren/bull).

c) India is forced to export its buffalo beef to the rest of the world since domestic consumption is very sporadic and poor.

d) India has THE highest rate of malnutrition among children in the world. There is massive protein deficiency.

I also don't like the idea of animal sacrifice (although I don't wish to dabble in people's religious beliefs). I prefer humane slaughter in proper abattoirs. Animals must be treated humanely. There is no excuse to treat them badly – even as food.

Solution: Let there be a EAT BUFFALO FOR HEALTH MOVEMENT in India which will lead to a new industry, improve the buffalo stock, and improve the nutritional status of our children.

A win-win for everyone. Without firing up the mad Hindutva fanatics who are determined to make India as backward as they possibly can.

WE ARE MAKING CHINA HEALTHIER WITH OUR BUFFALO MEAT

“There has been a huge demand for Indian buffalo meat in China" [Source]. What's the point of this – when our own children are badly nourished, we are making China healther?

This entry was posted in India, Public policy, Religion.

32 thoughts on “Hindus agree that the buffalo is not sacred. Let there be a “EAT BUFFALO FOR HEALTH” movement in India.”