Ramesh Umarane has a theory that consciousness came first, then space time, then energy ["there can be no energy without space"]. That is a derivative of Advaita, an otherwise plausible theory if it is considered to be a form of pantheism.

The actual sequence, however, is the following (note there is much more complexity, but for that you'll have to go to a proper book on the subject).

From the singularity (a concept currently contested under multiverse theories) came a "dense" soup of energy at unimaginable 'temperature'. This blew "out" (inflation) instantaneously, creating space-time as it went along.

"The universe began, scientists believe, with every speck of its energy jammed into a very tiny point. This extremely dense point exploded with unimaginable force, creating matter and propelling it outward. the Big Bang flung energy in all directions at the speed of light (300,000,000 meters per second, a million times faster than the H-bomb) and estimate that the temperature of the entire universe was 1000 trillion degrees Celsius at just a tiny fraction of a second after the explosion. The Big Bang did not expand through anything. That's because there was no space to expand through at the beginning of time. Rather, physicists believe the Big Bang created and stretched space itself, expanding the universe. " [Source]

In my view (not the standard theory! so beware!) energy travelling faster than the speed of light created its own 'gravitational' field (sub-atomic) and distorted space. It kept travelling in a straight line but space had by now been created and what appeared to be a straight line was a tiny particle. Any light slower than that (a general minimum speed being c – although light can travel slower than that), became a 'photon' and kept travelling (and continues travelling today) at the speed of light. Now there are things like the Higgs bosons, etc. and they are probably right to imagine that there is a "particle" that constitutes matter, but I prefer my 'theory' of the smallest particles being nothing but energy "travelling" faster than light that has created and distorted space to such an extent that it appears to have mass.

But ignoring my "theory" for a moment (I bring not the slightest rigour to prove this idea, so it is best ignored), the fact remains that it took THREE SECONDS for proper atoms to form after the commencement of the universe. "Proper" space and matter took time to form. And as the matter expanded, space expanded along with it, and also time.

So the sequence is ENERGY > MATTER + SPACE + TIME.

Then, 14 billion years (appx.) later comes human consciousness. So the sequence is:

A sequence that imagines that consciousness came first is plain wrong. 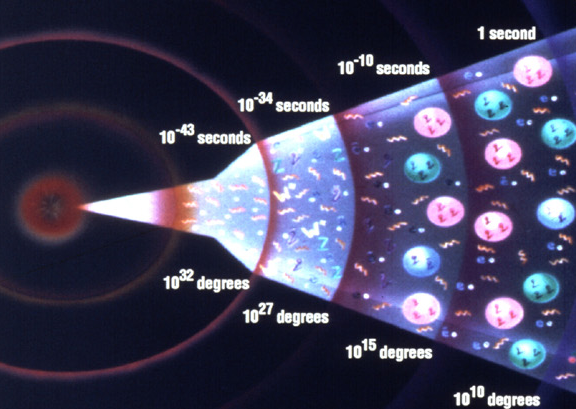 This entry was posted in Religion, Science.

« The case for water privatisation
The economic value of culture: India’s culture of filth vs. Japanese culture of cleanliness. »
View more posts from this author