I do hope you didn’t lie to me, Somnath Bharti. You should now resign from AAP.

A few days ago I was surprised to find that Somnath Bharti was quoted in an interview in Economic Times that AAP would subsidise Delhi if needed, to provide 50 per cent reduction in electricity.

This is what he is quoted to have said:

"Fulfilling the promises made by our party is on top of every leader's agenda.

"Our first priority is to reduce the power tariff. If needed, we will give subsidy to the people."

Well. Given the fact that Somnath Bharti was once member of FTI (and remains a good friend) – a group of leaders that demand liberty and small government – I asked him about this on Facebook. He vigorously DENIED the subsidy suggestion and informed me that the journalist had misquoted him. 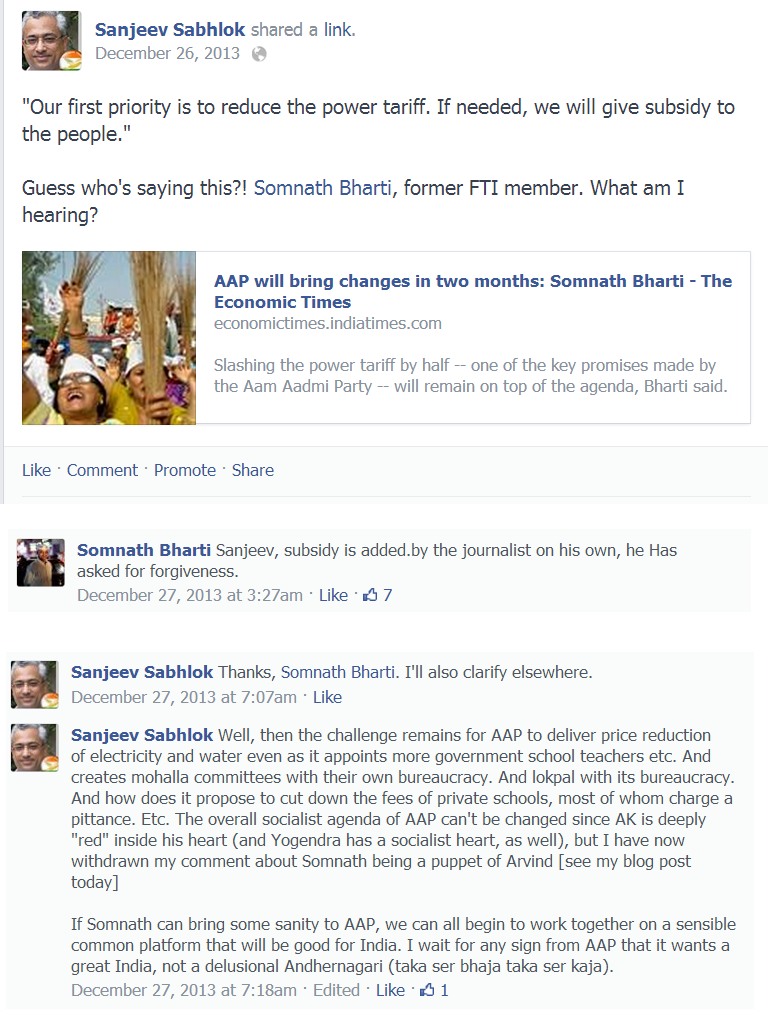 But now Surajit Dasgupta has drawn my attention to this news. 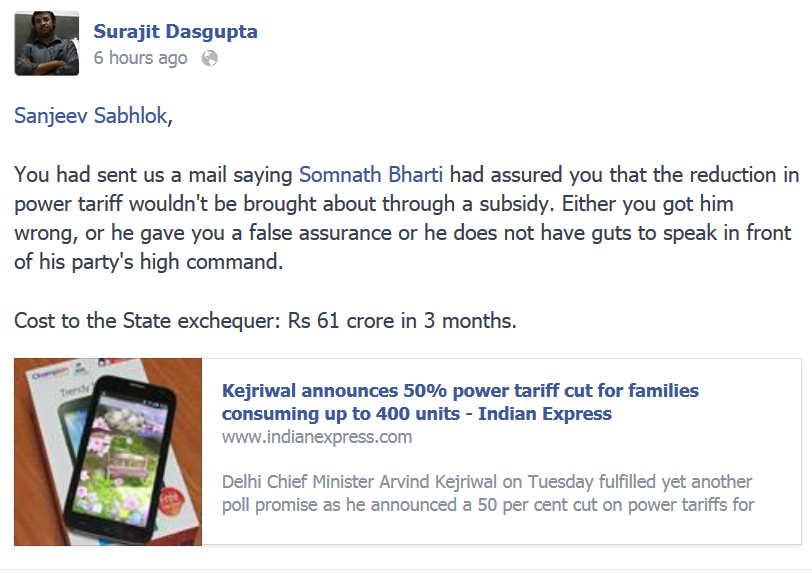 So well, there are two scenarios:

1. Somnath Bharti spoke the truth to the Economic Times reporter but lied to me.

2. Somnath Bharti spoke the truth to me but was over-ruled by Arvind's Cabinet.

I'd like to believe that Somnath is not a liar. I respect Somnath too much to expect him to lie to me. He was therefore misquoted by the journalist and he spoke the truth to me.

However, in that case Somnath has been overruled by the Arvind Cabinet.

The decision to subsidise power tariff, which will involve a cash outgo of Rs 61 crores in the next three months, was announced by Chief Minister Arvind Kejriwal after a meeting of the cabinet.

Somnath is a voice of reason in the wilderness of AAP. So he has to ask: Does he want to associate his name to the destruction of Delhi?

Somnath joined AAP late last year with my complete consent, after detailed discussion with me. But the aim of having him join AAP was to influence AAP's policy. That didn't happen. AAP kept making socialist announcements.

So finally I called upon FTI to resolve to remove any FTI member who joins AAP. The resolution was passed by FTI sometime in the first half of this year. Somnath had therefore to leave FTI. Similarly, Shantanu Bhagwat has had to leave FTI because of this resolution.

Now, my question to Somnath is: Is he comfortable with such a position in the Cabinet: where the socialist agenda is BLATANTLY visible?

Somnath told me in April in Delhi that Arvind says he is not a believer in any ideology. But what else is this but DEEP SOCIALISM? The most irresponsible policy making process? A process that will harm India even further.

I have always told Somnath that good intentions don't matter in the end. Knowledge does. And his voice and knowledge is clearly not heard in Arvind's Cabinet.

I ask Somnath to resign from AAP.

« “मुझे चाहिए पूरी आज़ादी”. Arvind, FREE is not the same as FREEDOM.
An open wager with Arvind Kejriwal: Remove corruption and get true value declared in Delhi real estate and I’ll pay you Rs. 1 lakh »
View more posts from this author

One thought on “I do hope you didn’t lie to me, Somnath Bharti. You should now resign from AAP.”