Modi magical rickshaw: this man is pulling wool over an entire country’s eyes, and the country doesn’t want to ask questions.

The Godhra judgement is one of the most mysterious that one can come across.

I've already pointed out the HUGE GAPS IN THE SCENARIO PRESENTED BY MODI'S STOOGES:

The rickshaw is one of the most fascinating fabrications of the human imagination:

"Distance between the station and A cabin is about 3/4 kmt. and ordinarily it takes about 3 to 4 minutes for a train to cover that distance." [Nanawati Commission]

Now, presumably ISI had all this prepared in advance:

a) The train would be late

b) There would be a number of altercations

d) An angry crowd would emerge (after all, the Muslims lived just outside the station).

g) The rickshaw would rush like a bullet to reach Cabin A in four minutes (after the loading, which presumably BEGAN after the train arrived)

h) 140 litres of petrol (weighing 102.3 kilos) was lugged up a VERY STEEP INCLINE FROM THE ROAD (Despite Modi's wishes, I assume his rickshaw can only disappear, not fly) by superman Muslims in BROAD DAYLIGHT. No lapse of time occurred in this process. Instantaneous.

i) These supermen, with SEVEN cans of 20 litres each of petrol snuck in INVISIBLY to the vestibule. They cut it but NEVER LEFT ANY CUT MARK BEHIND.

j) Despite the officers of the Railways watching the scene clearly, no one noticed them. All passengers were blind. The 250 karsevaks in bogie S6 were entirely numb with fear. Or maybe then never saw anything.

This is from the court judgement.

The petrol Cans which were stored at Aman Guest House were taken in a loading rickshaw, near the “A” Cabin.

OK. Let's assume this actually happened. Now, the police rehearsed the rickshaw story by taking water for a distance of 750 metres:

PW-200/Exh.1013 Karansinh Ranjitsinh Jhala (panch witness):
Rehearsal of taking loading Rickshaw putting nine Carboys of 20 litres water from Aman Guest House to open space near ‘Ali Masjid’ came to be done in presence of panchas and other seven police officials and in that rehearsal within four minutes that distance of 750 meters came to be passed.

Very nice. So there is now proof that a rickshaw can travel 750 metres in 4 minutes, carrying 180 litres of water.

the ‘A’ Cabin where the alleged incident was occurred, is situated at the distance of approximately one k.m. on the western side (on Vadodara side) from the Godhra Railway Station platform No.1.

The building of said ‘A’ Cabin is two storied i.e. ground floor and first floor and the same is on the southern side (on Signal Faliya Side) of the Railway tracks. The first floor is being used by Railway staff, for the purpose of signal etc and there are glass windows, in the all the walls of the first floor, so that the Trains, Tracks, Signals etc can be seen easily by the Railway staff, from inside the ‘A’ Cabin.

Now, let me provide snapshots of the scene near this Cabin A: 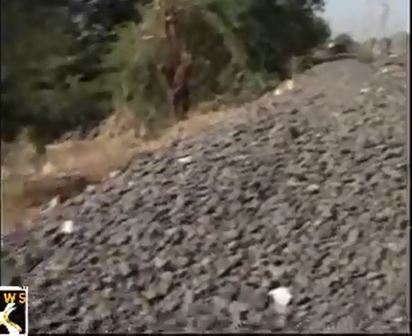 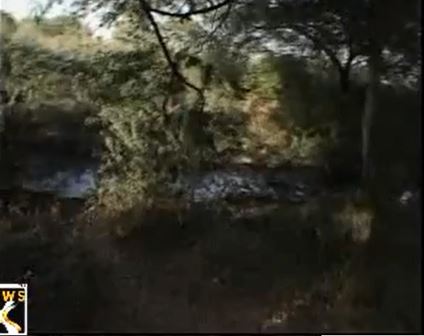 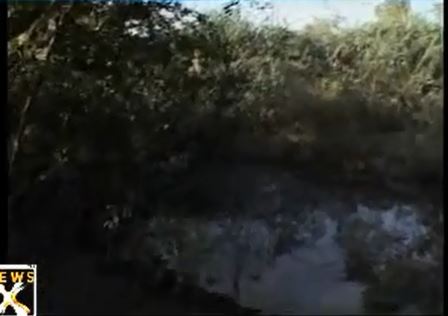 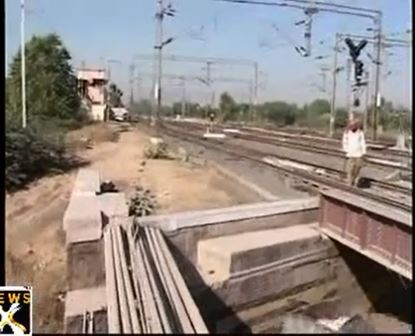 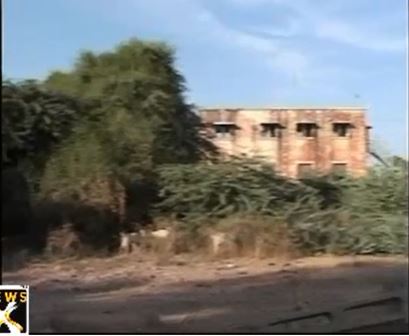 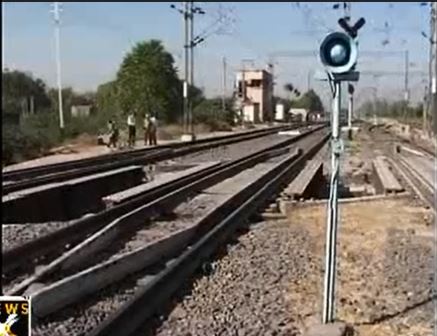 Please watch this from 8 minutes and 55 seconds:

Now back to the rickshaw.

So we see CLEARLY that there was no road leading directly to coach S6. That means the rickshaw actually stopped somewhere, unless it was able to fly. The MOST LIKELY PLACE where such a (hypothetical) rickshaw could stop was below the bridge. The super-Muslims would then have to LUG 100 KILOS OF PETROL IN SEVEN CANS a good distance to coach S-6 (which came to a halt VERY CLOSE to Cabin A and was in full view of the Asst. Station Master).

The process of carrying these cans had to be done very quickly (the argument that these "planners" cut the air hose is FALSE. There is simply no proof of that. The only sensible reason is that of the four or more chains pulled, one of these hoses was not properly fitted. There is no evidence of any cut hose. The train did move after the first chain pulling and it is almost certain that the loose fitting of one of the hoses forced it to a further halt. No "planning" involved here).

These cans HAD TO BE CARRIED IN COMPLETE OPEN DAYLIGHT WITH HUNDREDS OF TRAIN PASSENGERS WATCHING. There is no other way to do that.

I'm afraid I'm getting a bit tired of this ridiculous story. What is astonishing is that the Indian media has sat like a stunned mullet lapping up this GARBAGE. And so have people like Madhu Kishwar.

Have people lost their mind? Aren't they able to ask QUESTIONS?

The man who challenges this (Sehgal) is a senior forensic leader of India and a member of Interpol. He is basically saying that this story is impossible. And no one in India is bothered?

Has Modi cast a spell and LOCKED UP our mind?

1. Why is the truth about how Coach S6 got burnt in Godhra so important to the case against Modi?

2. This is how the train MIGHT HAVE gotten burnt. In any event, no evidence exists of any prior intent to kill.

« Why are Indian courts permitted to UNCONSTUTIONALLY allow God to own property and to litigate?
OK, burning brides is not a Hindu custom alone. Muslims are pretty good at it, as well. »
View more posts from this author

8 thoughts on “Modi magical rickshaw: this man is pulling wool over an entire country’s eyes, and the country doesn’t want to ask questions.”