This short video (must watch) affirms that a government can take away private property only for public use (and that must explicitly be public, not benefit any private individual or restricted group of individuals).

Benthmite utilitarianism is useful, but only up to a point. The moment its conclusions encroach on liberty, utilitarianism is dangerous. FTI's policy framework explicitly gives cost-benefit analysis a lower level of power in decision making than liberty. It becomes relevant only after liberty has been protected.

This video also affirms that majorities quickly tend to become tyrannies unless strongly restrained by a constitution. It affirms that Constitutions must be SHORT, CRISP AND TO THE POINT: and firmly prevent government encroachments on liberty. No qualifications. No ifs and buts. No "subject to the law". The law MUST NOT violate liberty. Period.

(The Indian Constitution, by the way, is a total mess – but I don't hear people like Shailesh Saraf/ Arvind Kejriwal/ Anna Hazare, etc. talking about the destruction of liberties in our Constitution. For these people democracy is the main goal of a government. For me liberty is.)

The day democracy is seen as a tool for decision-making within the confines of a strong constitution, we'll stop unnecessary fights regarding "FPTP/PR/presidential" etc. systems. The way we elect representatives is far less important than what the constitution says and the way our courts defend liberty.

To most people, government seems to be about power. Therefore they want "people's power" or democracy. But that is mistaken. Government is designed SOLELY for the defence of liberty. It is not about power. If a democratic government goes outside this strict bound, then democracy itself must be shunned. It must be reformed. Even overthrown violently, and replaced by a stronger constitutional restriction on the majority.

In this video, Professor Munger reminds us of the difference between democracy and majority rule. Democratic constitutions establish not only the process by which decisions will be made, but also the limits on kind of things can be voted on. This prevents the majority from deciding everything. He warns, however, that these limits on what can be decided democratically have been slowly eroded in American courts of law.

One example of a weakening of limitations on democracy is the Supreme Court ruling in the 2005 case Kelo v. New London. When Miss Kelo refused a private real estate developer’s offer to buy her house in New London, Connecticut, the developer convinced the city council that its citizens would be better off if her house were torn down and condos built in its place. The majority of citizens preferred the greater tax revenue, and the council voted in favor of the developer. After taking the case all the way to the Supreme Court and losing, Miss Kelo lost her property.

According to Professor Munger, the United States Constitution was designed to prevent individuals and their property from falling prey to the “tyranny of the majority,” by defining the domain in which the majority can make decisions. By confusing majority rule with a democratic system, we endanger the freedom of all individuals. 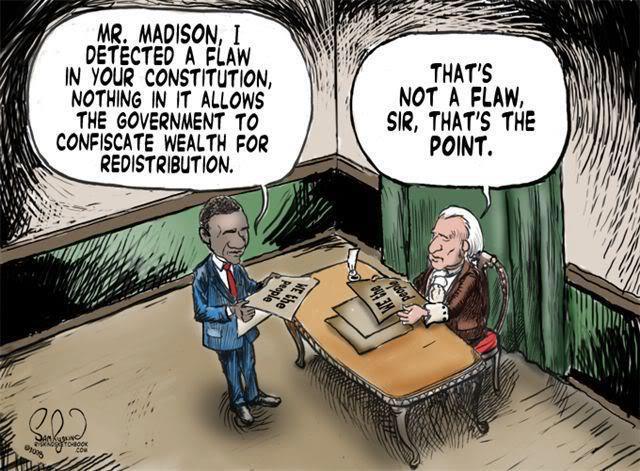 This entry was posted in Liberty, Public policy and tagged in Democracy, Proportional representation, Rule of law.

« In support of Aseem Trivedi, now being tried in India for sedition for drawing cartoons
Response to question: “Where do atheists or agnostics derive their morals and ethics from?” »
View more posts from this author