Rondo Cameron's textbook, Concise Economic History of the World is considered by most "economists" to be the greatest introductory textbook on world economic history.

Since about 1995 I have in my possession this book's 1993 edition (it was a prescribed textbook during my doctoral studies) and have skimmed through it casually in the past.

It is enormously detailed (not concise!) as far as European (and American) economies are concerned. But is is BEYOND PATHETIC in terms of coverage of India and Asia.

As I continue to discover some wonderful (and intriguing!) things about Hindu capitalism, I'm overcome with a sense of DISGUST, even ANGER at the fools in the West who pretend to write histories of "the world", when all they are writing about is a measly 1/10th of the world. I would have no problem if they said they were writing about Western economic history, but to arrogate themselves as experts in global economic history when their knowledge is little more than a kindergarten kid's as far as 9/10th of world history is concerned, is a bit rich!

And whatever little Cameron has written about India is so full of platitudes and nonsense that it would have been better not to write it at all. Let me extract below what he has written. It is best that such useless NONSENSE is not taught in the West (or anywhere for that matter!).

If Indian economists don't start challenging these FOOLS, expect the world to continue to pretend that the GREATEST region of the past 5000 years – India! – was a small little blip in world history.

The winners get to write history.

But this is PATHETIC. DEPLORABLE.

It should go back to the drawing board.

Or maybe I should write a 400 page book of world history with 2 pages devoted to England and USA – that too full of inaccuracies?

The Indian subcontinent, including modern Pakistan, Bangladesh, and Sri Lanka, is roughly the same size as Europe west of the former Soviet Union (Fig. 4-4). Its population is even more diverse than that of Europe in terms of ethnic origin and language. The terrain and climate are equally varied, from tropical monsoon forest to burning desert and glacial mountains. Throughout its history, from the first civilization on the Indus River in the third millennium B.C. to the present, principalities, kingdoms, and empires have risen and fallen in bewildering array. For the most part this succession of political states has mattered little to common men and women, the peasants whose labor supported the rulers, except that some of those rulers were more ruthless and efficient than others in extracting a surplus of tribute and taxation. 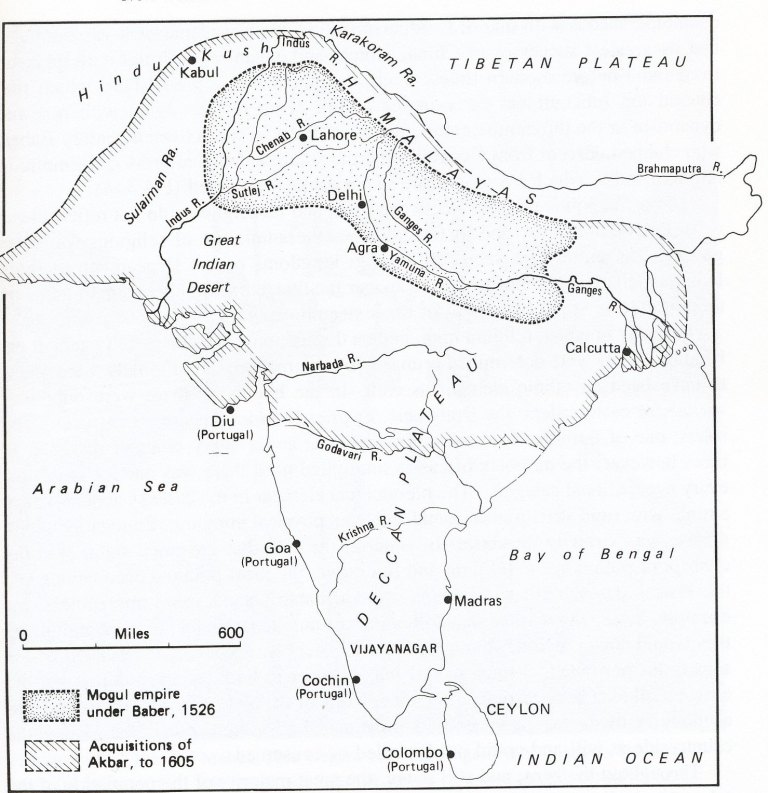 The aboriginal population of the subcontinent may have been related to that of Australia. Over the centuries and millennia, however, it was reinforced—or over-whelmed—by waves of migrants and invaders Most of the newcomers—Bactrian Greeks, Scythians, Parthians, and Mongols, among others—came from the north-west by way of Persia or Afghanistan, but some also came from the northeast from Tibet and Burma. Eventually, with one major exception, the Muslims, these newcomers adopted native ways and local culture, including religion.

Religion had a greater impact on the economy than government, but the complexities of that subject defy succinct explanation. The primitive [Sanjeev: This man Cameron is an IDIOT. He has simply no clue about ancient Indian philosophy or religion. Such an adjective gives away his total ignorance of the topic at hand. I am not a Hindu or a religious man, but I can say without any doubt that there was greater depth of philosophy and logic (and maths!) in ancient India than found anywhere else in the world, possibly till very recently.] original religion was Hinduism, which developed with many variants and heterodox sects, including the Jains and Sikhs, who are still active today. Buddhism, whose origin was roughly contemporaneous with that of Confucianism in China, was one such variant; but it had its greatest successes in China, Korea, and Japan, and virtually disappeared from India before modern times. Such was not the case with Islam, which first entered the subcontinent early in the eighth century, then again with renewed dynamism in the thirteenth century and later. Early in the sixteenth century Babar, who claimed descent from Genghis Khan, created the Mughal or Mogul Empire in northern India, which his grandson, Akbar, greatly enlarged (Fig.4-4).

Today the political borders between India and its neighbors do not reflect clear-cut religious divisions, and in former times the admixture of religions was even greater. The enmity between the Muslim kingdoms of the Deccan, in southern India, and the Hindu empire of Vijayanagar facilitated the establishment of bases by the Portuguese at the beginning of the sixteenth century.

One way in which religion impinged on the economy was the caste system of the Hindus. Castes were determined primarily by occupation, but originally there seems to have been an ethnic element as well. In the beginning there were only four varnas, or caste orders: the Brahmans, or priestly order; an order of warriors and rulers; one of farmers, artisans, and merchants; and a lowly order of servants. In time, however, the numbers of castes multiplied until there was one (or more) for every occupational category. The hierarchical element in the caste system was very strong, with rigid strictures on social and even physical mingling. Endogamy within a caste was virtually universal. In general, the rule that governed status was the concept of pollution, both literal and figurative: the most polluted occupations had the lowest status, with some being "untouchable" and even "unseeable" (for example, those who washed the clothing of the untouchables had to work at night so they would not be seen). Although the caste system was probably not as rigid as it is sometimes portrayed, it must have been a barrier to both social mobility and the efficient allocation of resources. Another element of the Hindu religion inimical to economic growth was the veneration of cattle—the "sacred cows" that roamed the countryside at will and could not be killed or consumed.

Throughout the ages, and still today, the great majority of the population of the subcontinent lived in villages and engaged primarily in low-productivity, near-subsistence agriculture. Even in relatively recent times, people living in heavily forested areas used a slash-and-burn farming technique, as practiced in northern Europe before the advent of sedentary communities. Elsewhere agricultural techniques, and the crops grown, depended on the characteristics of soil and climate. In the monsoon area the staple crop has been rice, initially obtained from Indochina. In drier lands the staple was wheat or barley, which came from the Middle East, or millet from China or perhaps western Asia. India's authentic native crop was cotton, which is mentioned in the Rig Veda, the Hindu holy book.

Although the majority of the population devoted its time and energy to agriculture, India did not lack skilled craftsmen. Intricate works of art, statuary, and monumental architecture (the Taj Mahal [Fig. 4-51, for example), all of which bear comparison with the best of Greek and Roman art, are the evidence. These craftsmen, however, worked for the rich and powerful; the masses had no purchasing power, and there was no middle class worth mentioning. [Sanjeev: This is absurd. If the caste system and other barriers of Hinduism didn't allow economic growth, then how did these rich arise? That's what an economic historian is supposed to find out! Cameron FAILS. An "F".] The little commerce that existed was in the hands of foreigners, mainly Arabs.  [Sanjeev: This is ABSURD NONSENSE! Another FAIL.] 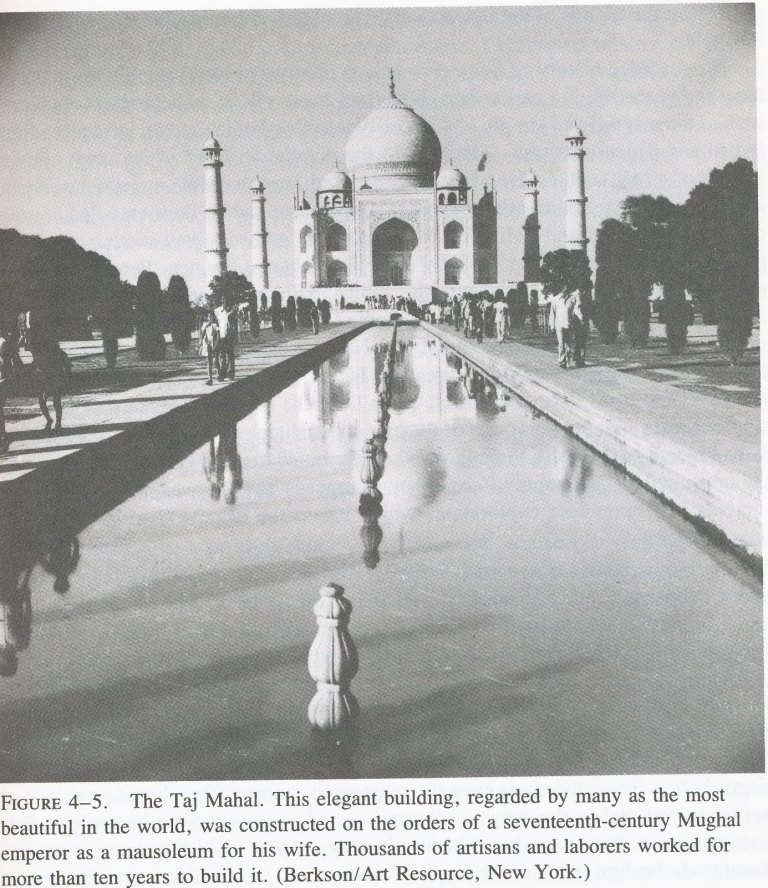 [Then he goes on..] Southeast Asia, from Burma in the northwest to Vietnam in the east and the Malay peninsula in the south, is also known as Indochina because its culture is a blend of Chinese and Indian cultural traditions. … BLAH BLAH