I'm reproducing below the ACTUAL text from IPCC's first assessment that can be downloaded from here.

Go on! Download and SEE FOR YOURSELF.  Don't be scared. The truth won't bite you!

John Quiggin, if you are listening, please do so as well. All other Australian Climate Change Taskforce members are also invited to the TRUTH.

Even BLATANT LIARS like Rajendra Pachauri might benefit from some exposure to the truth, although that is perhaps asking for too much from the POWER HUNGRY.

There is growing evidence that worldwide temperatures were higher than at present during the mid-Holocene (especially 5 000-6 000 BP), at least in summer, though carbon dioxide levels appear to have been quite similar to those of the pre-Industrial era at this time (Section 1). Thus parts of western Europe China, Japan, the eastern USA were a few degrees warmer in July during the mid-Holocene than in recent decades (Yoshino and Urushibara, 1978, Webb et al 1987, Huntley and Prentice, 1988, Zhang and Wang 1990). Parts of Australasia and Chile were also warmer

The late tenth to early thirteenth centuries (about AD 950-1250) appear to have been exceptionally warm in western Europe, Iceland and Greenland (Alexandre 1987, Lamb, 1988) This period is known as the Medieval Climatic Optimum. China was, however, cold at this time (mainly in winter) but South Japan was warm (Yoshino, 1978) This period of widespread warmth is notable in that there is no evidence that it was accompanied by an increase of greenhouse gases. [p.202]

This explanation is accompanied by the following LONG TERM graphs. The data speaks for itself (click for larger image): 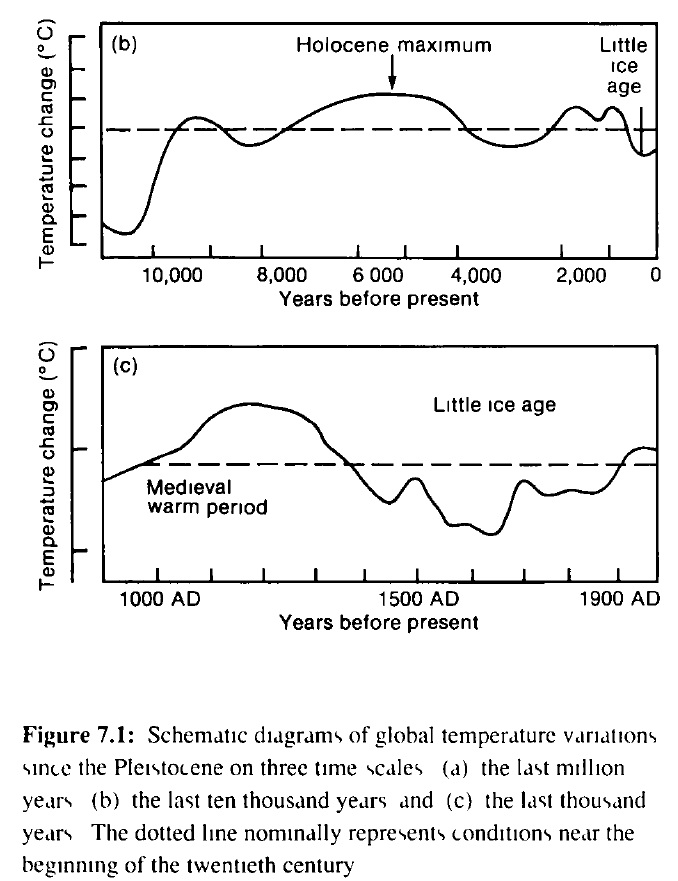 « So what do long term (2000 year) climate data STILL say?
Why having long term data is crucial before arriving at ANY conclusion about climate change »
View more posts from this author