Dirty politics seem to be in the BLOOD of this two penny "leader" Rahul Gandhi.

Not only has he keenly clung on to the BILLIONS of dollars of corrupt money that his grandmother, father and mother accumulated, he is bringing his so-called "caste" into play.

From the (current) traditional Hindu perspective, there is SIMPLY NO DOUBT that Rahul Gandhi is NOT a Brahmin.

His grandmother [corrigendum: I had written “mother”] lost her (father-transmitted) "Brahminhood" the moment she married Feroze Gandhi, a Parsi (Zoroastrian). In (traditional) Hinduism, no "Hindu" ceremony can allow a Parsi to become Hindu. Like the Jews (and Hindus), Zoroastrians can never change their religion – unless they renounce it specifically. But most problematicallly for Rahul Gandhi's delusions of "Brahminism", (traditional) Hinduism does not have ANY mechanism to accept someone from another religion. Thus, his grandmother lost her Hindu roots immediately upon marrying a Parsi.

Not only that, in traditional Hinduism the woman gets the "caste" of her husband – in this case casteless (thankfully) Parsi.

In other words, Rajeev Gandhi was a Parsi, Zoroastrian (regardless of his belief, if any).

And Rahul Gandhi is CLEARLY Parsi (regardless of his mother being Christian). Rahul Gandhi CAN NEVER be accepted into Hinduism under traditional rules.

This, in any event, is the traditional Hindu story.

So Rahul Gandhi is LYING.

But I'm an opponent of the caste system and this stream of thought (howsoever interesting to some) is irrelevant.

What may be relevant is the original meaning of the word "Brahmin" that was pointed out by Sureshan on this blog the other day:

Story of Maithreya is very important . Here explains what is the real meaning of Brahmin- a person of high thoughts and high knowledge can be Brahmin. Since Maithreya was born to a domestic servant he did not know who was his father. After attaining knowledge he was became Brahmin. So the basis for identification of four different sects was their duties and nothing more. By birth no body entitled to claim any caste  [Source].

Assuming this meaning to be true, only someone of high knowledge and high thoughts can be considered Brahmin.

Thus Nehru was a genuine Brahmin (I hold him in high esteem as a thinker, despite vehement difference with his ideology). And Ambedkar was a Brahmin.

He must be joking. 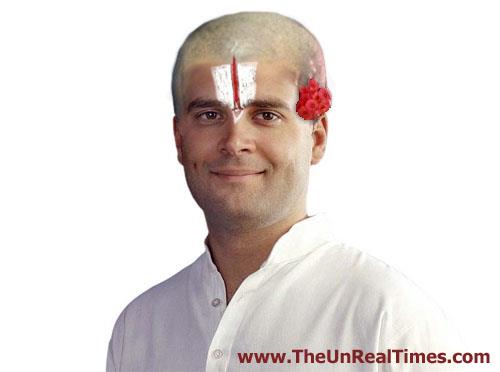 This entry was posted in India, Politics and tagged in Rahul Gandhi.

« This video may end the livelihood of thousands of doctors and save millions of pain sufferers
Vikram Buddhi punished for no crime. Shahrukh Khan detained twice for no crime. »
View more posts from this author