Arrest me if you dare, you miserable incompetent corrupt dictator, Mamata Banerjee

This is beyond obnoxious. We know that Zimbabwe, Bangladesh and China do such things – the SCUM of THE Third World., the nincompoops whom none can redeem unless their leaders are removed by their people.

police woke up to a complaint filed by a Trinamool Congress worker and put Ambikesh Mahapatra, the 50-year-old head of physical chemistry and kinetics, and his 75-year-old neighbour, Subratra Sengupta, a cardiac patient, behind bars late Thursday. Sengupta was apparently arrested simply because he was present when Mahapatra sent the mail. Earlier, Mahapatra alleged, they were beaten by party goons. [Source]

They were booked under IPC Sections 509 (word, gesture or act insulting the modesty of a woman), Section 500 (defamation) and Section 114 (abettor present when offence is committed) and Section 66 A(b) of the IT Act (causing offence using a computer) [Source].

We knew that totalitarianism was coming to India ever since Kapil Sibal threatened such things to protect his goddess Sonia Gandhi. But politicians  are now starting to do this WITHOUT SEEKING PARLIAMENTARY AUTHORISATION. That is totally unacceptable.

Change the Constitution to remove ANY REFERENCE TO Freedom of Speech. Else be prepared to be pummelled at the hustings.

You fools who govern India, DO NOT ATTACK FREEDOM OF SPEECH. That's the only thing India now has. If that too is removed, expect MASS REVOLUTION.

Here's the cartoon, below. Please widely circulation this. I can read the Bengali script and understand some of it, but I couldn't (at a glance) figure out what is going on in this cartoon. Nevertheless, spread it AS WIDELY AS POSSIBLE.

I dare Mamata to issue an arrest warrant for me. Get me extradited to India for WIDELY circulating this on Facebook, and publishing on my blog. I take responsibility for this CRIME of freedom of speech. 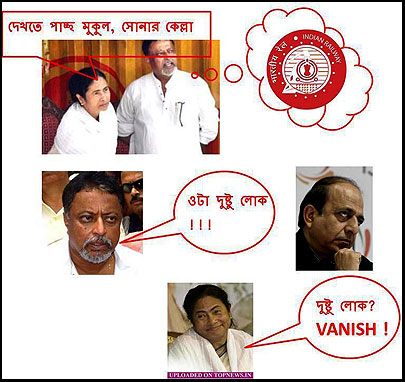 If we don't fight for freedom of speech in India, the lights of all freedoms may be permanently snuffed out.

For 60 years we did not fight.

Now this is the last chance.

If we don't fight now, expect the government to take this as a signal that Indians just don't care for their liberty.

Unite. Speak up and be counted. Do whatever you can to fight this oppression. Show the government of India that YOU count. 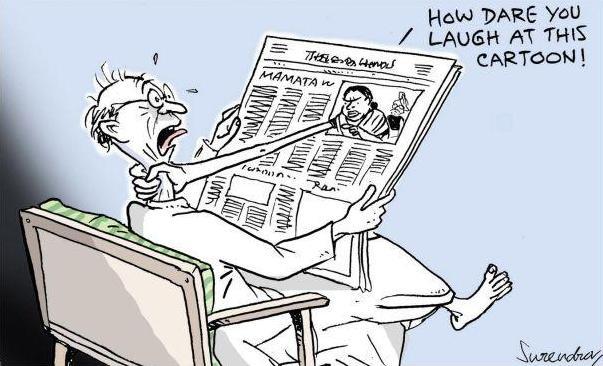 This entry was posted in India, Liberty, Politics.

« Vikram Buddhi punished for no crime. Shahrukh Khan detained twice for no crime.
Man is the ONLY form of intelligence in the universe »
View more posts from this author

2 thoughts on “Arrest me if you dare, you miserable incompetent corrupt dictator, Mamata Banerjee”