Want good policy? Do a cost-benefit test first, then test for freedom

In BFN I've cautioned against the blind use of economic (or cost benefit) analysis, thus:

While endorsing most of the standard literature of economics and economic reforms, I would like to suggest a few words of caution:

And in the Online notes to BFN (these will, I hope, one day be re-combined with the main book, according to the original design):

If conclusive evidence cannot be adduced to prove beyond doubt that the government can, on balance, deliver better outcomes than citizens acting on their own behalf, then that activity will revert back to the citizens. It is preferable that citizens solve a Problem imperfectly in complete freedom, than for them to pay a government to do it equally or more imperfectly at much greater cost.

Without first qualifying the hurdle of a cost-benefit test, however, we can't even come close to assessing the second (and key question) does this policy pass the test of freedom? There are areas of government policy that must be off-limits REGARDLESS OF COSTS AND BENEFITS. That is what I've written about in BFN through the three-tier classification of the roles for government:

FIRST ORDER: A good government needs to deliver high quality outputs in at least three ‘first-order’ core areas, of defence, police and justice. These functions must be carried out outstandingly well and, if necessary, to the detriment of all other functions. If funds run short, a government can always provide incentives to citizens to take up relatively secondary things like infrastructure through a range of innovative ways by transferring property rights over roads, airports, or railways.

SECOND ORDER: After performing these first-order core functions outstandingly well, a government must focus on providing infrastructure and equality of opportunity. Appropriate funds need to be deployed to deliver second-order core functions well. Given space constraints, I do not discuss infrastructure provision here. All I note is that where goods are excludable, i.e. wherever boundaries can be drawn around an infrastructure and therefore user-pays ticketing is feasible, such infrastructure will be sold in a systematic manner to the private sector. Where partial ownership or property can be given to the private sector, such as through toll-based highways or other public–private partnerships, that option will be explored. Finally, where it is not feasible to privatize infrastructure because of non-excludability, the government will directly provide the service wherever possible, outsourcing it and acting as an auditor rather than manager.
THIRD ORDER: There are some non-core functions that a government can also perform, if funds so permit. (I only gave the example of environmental sustainability in BFN, but a few others, e.g. support for the preservation of "heritage" might come in this category).

The Freedom Team of India has, after nearly three years of debate, adapted this approach to categorisation of public policy (I encourage you to consider FTI's draft approach, which is quite good).

The diagram below summarises this: 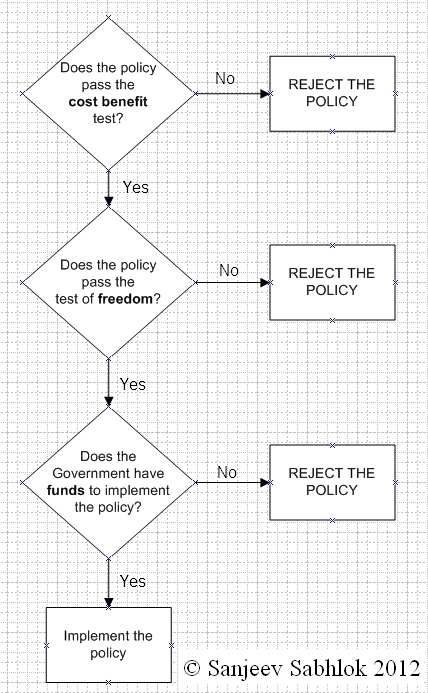 This is revolutionary stuff!

But note that this way of thinking is quite revolutionary! For instance, in India, NO policy is ever determined through a cost benefit test (leave alone a test of freedom). I'll leave you here with an extract from a recent conversation on FB with Harsh Vora:

Harsh Vora: Legalizing drugs is indeed a delicate issue. Here, Friedman makes fairly strong points in its support by explaining the 'negative' effects of banning drugs. I guess the question is whether the costs outweigh the benefits!  {Reference: this youtube video}

Sanjeev Sabhlok: The idea that cost/benefit analysis should be undertaken for public policy is totally revolutionary. Most moralists will not accept it. It is also difficult (in a moral sense) to quantify the value of the loss of innocents' lives. Moralists don't see both sides of the picture: only one (i.e. that taking drugs is wrong). I suspect on a pure economic cost benefit test, legalisation of drugs (with good regulatory frameworks) will significantly overwhelm the policy of prohibition.

Cost-benefit analysis is a utilitarian (a branch of classical liberalism) concept that gives all costs and all benefits equal weight, which is a weakness in its design (for after all, the rich man cares less for a loss of Rs.100 than a poor man). It also does not factor in the loss of freedom. However, in the absence of other techniques, it is the best available method, and if used carefully, can get us towards good policy. I think I briefly wrote about it in BFN. In India there is NO concept of cost-benefit analysis but only whims of policy makers (or moralistic preachers who claim to tell us what we should do).

This entry was posted in Economics, Liberty, Philosophy, Public policy and tagged in Cost-benefit analysis.