This must be true. From a speech given yesterday in Samrala, Panjab. I've not located the source on the internet, yet, but there is significant evidence, which I discuss below.  [Addendum. I've been provided the source: http://epaper.indianexpress.com/c/46596] 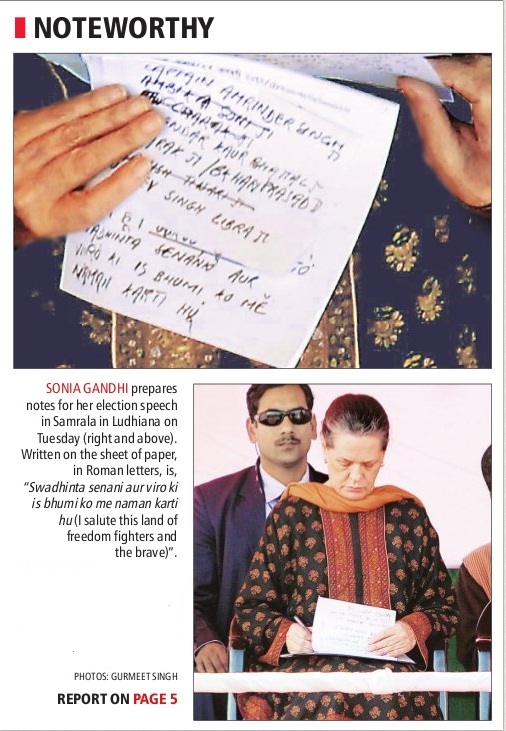 Evidence of the veracity of these "notes":

a) "Clad in a salwar kameez and donning a mustard duppata". (Tribune) The notes clearly have the salwar as background. The salwar kameez matches the picture in The Hindu.

b) "The UPA chairman was presented a siropa and a shawl by PCC chief Capt Amarinder Singh, MP Partap Bajwa and AICC incharge GS Charak." Amarinder Singh is clearly mentioned in the notes.

c) The bodyguard depicted above matches the one in the picture here, in The Hindu.

d) I've cropped and turned upside down a small section of the picture of Sonia sitting on the chair. It looks like this:

This little snapshot is difficult to read but had this picture been taken with a powerful digital SLR (as it almost certainly was), then it it likely would have, if blown up, matched the image above (which shows the detailed text).

e) While Indians are smart, it is rare for a picture to be "doctored" so quickly and so genuinely. I therefore rule out doctoring of this picture. This is a genuine article. It is also very rare for someone to be smart enough to strike out words, and generally create such a powerful impression of authenticity.

Ideally I'd like to see the original high density 4-6 MB picture from which the "notes" were identified. Nevertheless:

I'm almost 99 per cent convinced about the authenticity of the above picture of Sonia Gandhi's "notes".

If true, it is a sign of EXTREME SHAME for India, that we couldn't find ONE PERSON who knows an Indian language, to govern India.

An Italian who had learnt a Indian language (and taken Indian citizenship) might have been tolerated as the head of India's ruling party. But this is intolerable. A foreigner effectively ruling independent India.

And we have the shameful picture of a Sikh "honoring" this "Indian" foreigner with a sword. The entire Sikh religion is besmirched by such actions.

This is as authentic as it gets: http://epaper.indianexpress.com/c/46596

« Many happy returns of the day to the Republic. Let’s remember Ambedkar today.
Yet another example of “reason” without empiricism: climate “science” »
View more posts from this author