Info for the Occupy Wall St. movement: Entrepreneurs get only 2 per cent of the wealth they produce

A wave of SOCIALIST envy is sweeping USA – and now Melbourne.

Chris Breen, an activist from the socialist group Solidarity, told Green left Weekly: “We are in a world racked by inequality, where there is always far too much at the top; the CEO of the company I work for just got a 53 per cent pay rise up to $2.9m and in contrast up to a million people are going to starve in Africa.

“There is starting to be a movement around the world of people challenging that inequality, perhaps the most dramatic examples of this would be in Tunisia and Egypt — where the dictators in those countries have been toppled. Occupy Wall Street took its inspiration from Egypt and the movement in Spain.

“I am hoping this will become something more, but it is just the beginning so who knows. It’s important to support this event because we are all trying to change the world.”

Socialist Alternative activist Declan Murphy told GLW: “The global occupy movement is a very important movement as it is explicitly about reclaiming our democracy from corporate influence and from corporate power.

“I think it is telling that this movement has arisen globally in the circumstance of a crisis in the capitalist system. We have millions upon millions of people being plunged in to despair, declining living standards worldwide; austerity measures being brought in by governments.” [Source]

The ignorance of most people about how markets work is beyond dismal. They don't seem to know anything about what has made them wealthy in the first place. We need to give them a liberty primer, with articles such as I Pencil.

These people don't realise that 98% of the wealth that entrepreneurs create goes to the PEOPLE, and only 2% goes to them:

A discussion paper published in 2004 by the economist William Nordhaus attempts to establish exactly how thin that slice is. Nordhaus reckons that innovators capture a “minuscule” 2.2 per cent of the total social benefit of their innovations. The other 97.8 per cent goes to consumers, partly because competitors soon catch on, and partly because no company, even a monopolist, can charge each consumer a price reflecting her individual willingness to pay.

Professor Nordhaus’s estimate can be regarded as, at best, an educated guess, partly because Nordhaus is only able to focus on innovations which lead to lower production costs and thus lower prices. If that’s the metric, developments such as the world wide web or penicillin barely register. Still, I think it’s safe to say that both Tim Berners-Lee (the web) and Alexander Fleming (penicillin) reaped far less than 2.2 per cent of the total value to society of their insights. [Source]

Why would anyone in his right mind be jealous of people who GIVE AWAY 98 per cent of the wealth they produce?

Of course, this 2 per cent of the wealth these people produce is a FABULOUS amount. They therefore become fabulously rich. But it is only 2 per cent. Don't forget that. 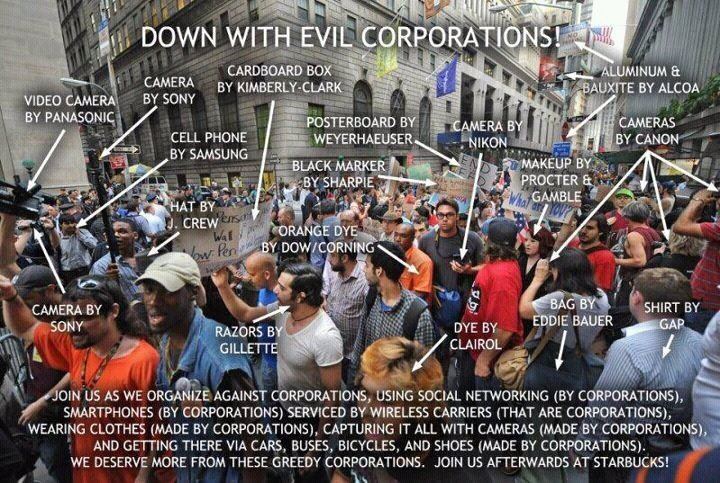 This entry was posted in Current Affairs, Economics.

« And now Joseph Stiglitz adds to the irrelevance of macroeconomics
Valid prediction is the only test of true knowledge. “Modern” macroeconomics fails ALL predictive tests »
View more posts from this author

54 thoughts on “Info for the Occupy Wall St. movement: Entrepreneurs get only 2 per cent of the wealth they produce”