Inconvenient truth: “corruption has crossed its limits in Gujarat”

Thanks to a FB friend for sharing this very important article.

I have always claimed that it is IMPOSSIBLE for Narendra Modi to be running an honest government under the current system.

He might be personally "not corrupt" but that is as pointless as saying that MMS is not personally corrupt. It doesn't matter if you are "honest" but you SUPPORT the corruption around you, and (in a position as senior as Prime Minister or Chief Minister) do not set up systems to punish the corrupt. (In Modi's case the problem is also the likely implication in the murder of hundreds of people.)

Here is what appears at first sight to be INCONTROVERTIBLE PROOF about corruption under Narendra Modi. (If this article is a fake or this person is lying, then these facts might not be true. But there is no reason that a father, whose son has been KILLED, should lie.)

Why is Modi refusing to appoint a Lokayukta?

"Once lokayukta is in place, believe me, several ministers will be behind bars."

"Yesterday (August 18) there was a government function at Khambha in Amreli – Chalo Taluka Sarkar. It was followed by lunch for the villagers. Only 500 people ate at the function, but the government claimed that 120,000 people had lunch. Now officials will also claim that money was spent on this extravaganza! It is taxpayer’s money. "

"Corruption in Gujarat is different. Gujarat has traditionally been very progressive and rich. Right now corruption that exists in Gujarat is not only different from that in other states but dangerous. We are a border state. Still our government is sheltering and doling out land to industrialists who have been sent to jail for extortion or custom evasion.

"My son was fighting to stop illegal limestone quarries. He had openly named BJP MP Dinu Bogha Solanki. He had proof. Still what happened? My son was murdered. Haren Pandya deposed before a people’s tribunal about Narendra Modi’s complicity in the genocide, that he was responsible for the death of hundreds of innocent people in 2002 riots. What happened? Modi became number one and Harenbhai was killed. This is Gujarat.

It is sad that in Gandhi’s Gujarat we blindly support Anna but are ignoring corrupt and criminal politicians. These politicians in partnership with select industrialists are plundering the state. The government allots land to industrial houses at throwaway prices. Look at Adani and his growth story. Adani Industries is the biggest beneficiary of our state government’s generosity. What is happening in the name of land acquisition? The Modi government is misusing the Land Acquisition Act."

"BJP which is ruling Gujarat is supporting Anna. It is good to have a lokpal in Delhi and to support Anna, but please support me also. If you are truly for justice and want to fight against corruption, BJP should support me in getting a lokayukta appointed in Gujarat."

What happens if you fight against corruption in Modi's government? You are MURDERED

"I will be murdered. Isn’t that what happens in Gujarat when you fight for justice? What happened to Haren Pandya? It was a political murder. What happened to my son? Specially after this petition, my life is in danger."

And so, this, my friends, is the true Narendra Modi: 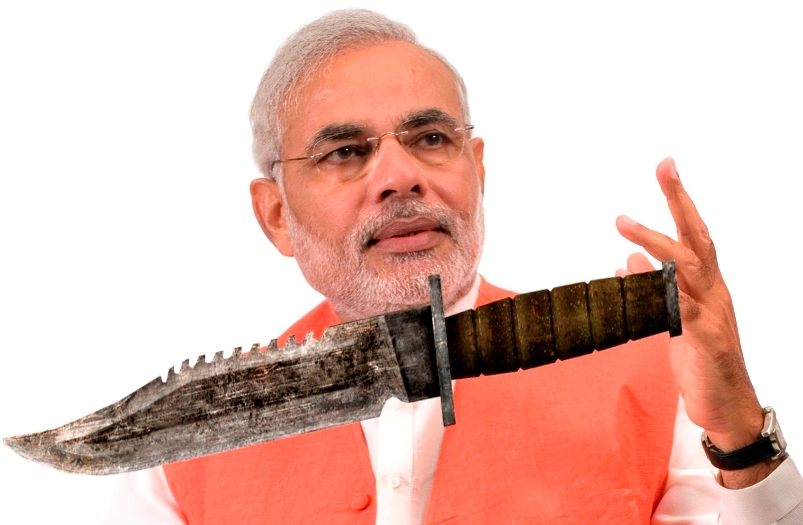 This entry was posted in Current Affairs, India and tagged in BJP, Narendra Modi.

12 thoughts on “Inconvenient truth: “corruption has crossed its limits in Gujarat””