I had published a blog post about this issue here. Now the Council of Indian Australians has condemned Kyle Sandilands's comments.

They've only demanded an apology. I want to see this man Kyle terminated from his job. No apologies will suffice. That's such a waste of time in such cases of bigotry.

Not only is Kyle's attitude (and education) a serious problem, Australians of his kind who slander India harm India-Australia relations, which are crucial to Australia's future. That's a real issue, and so I want to see Australia respond quickly. Unfortunately, that is not yet happening. Three days and no action yet.

Two years ago I defended Australia vigorously against allegations in the Indian media that racism was responsible for the attacks on Indians. That position still holds. I don't think people like Kyle attack Indians. They are not dangerous. Just bigoted. [See also my blog posts here.]

But there is RAMPANT soft racism in Australia and that must be stopped. Two ways to do that are:

(a) by India adopting good policies and becoming the superpower it is destined to become – as soon as it does so, and

(b) by Australia isolating and punishing soft racists and ill-informed bigots like Kyle. 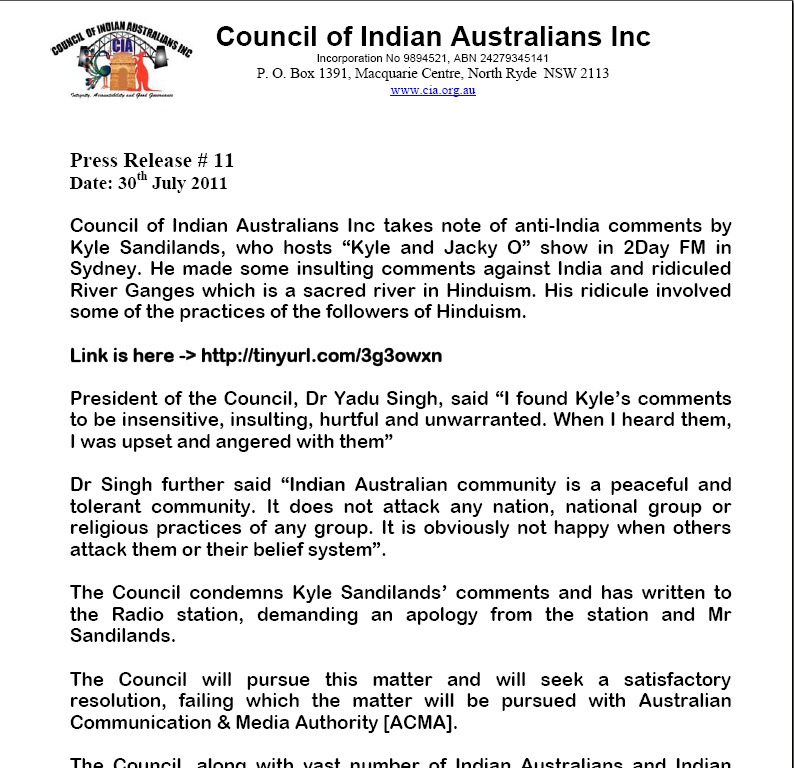 This entry was posted in Current Affairs and tagged in Racism in Australia.

« Puzzle: Why do people play games?
The Metaphysics of the Upanishads (Vichar Sagar) by Nischal Das #3 »
View more posts from this author