The last person who understood corruption in India was a man called Lord Cornwallis – the British general who was defeated and captured by George Washington, and was later sent to head the East India Company in India.

After Cornwallis NO POLICYMAKER in India has YET understood corruption. (FTI does)

Following on from this blog post, the simple theory is this:

1) You must meet the participation constraint.

You must ensure that good people (honest, intelligent, competent*) are willing to participate in the governance of India.

2) You must meet the incentive constraint.

You must ensure that incentives are in place for such good people to not deviate into corruption.

[*Note: competent means people who understand capitalism and prosperity, and know how to run a very tight, minimal, but strong government]

That's it. Don't waste time on anything else. Just understand these two lines I've said.

And if you don't understand what I've just said you have no business to be talking about corruption.

And so, this is the end of the lesson called Corruption for Dummies by Sanjeev Sabhlok. 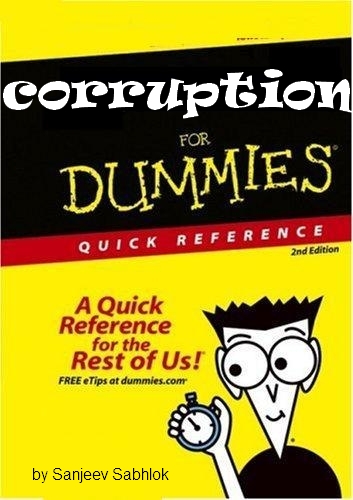 This entry was posted in Economics, Freedom Team, India and tagged in Corrupt India.

« If Anna wants to change laws, let him become an MP. No more of this street “democracy”, please.
The IAC chases after shadows while the causes of corruption are left TOTALLY untouched »
View more posts from this author

One thought on “Corruption for Dummies: Corruption made REALLY simple”